IRS Commissioner Charles Rettig testified before House lawmakers in October. He has called for a multi-year funding increase for the agency.
Photographer: Ton L. Sandys-Pool/Getty Images

The IRS is experiencing a unique moment where Democrats and Republicans are open to funding increases for the agency—but the question remains how much and for how long.

Years of budget cuts—driven by Republicans over the agency’s extra scrutiny of conservative groups applying for tax-exempt status—have forced the IRS to scale back its workforce by tens of thousands of employees. At the same time, the IRS’s responsibilities have increased.

But there has been a shift recently, with both Democrat and Republican lawmakers signaling they will consider more money for the IRS in the next funding cycle.

The government funding and Covid-relief bill enacted in late December included a slight boost to IRS funding levels, but IRS Commissioner Charles Rettig and former agency officials have said more is needed on a consistent, multi-year basis if lawmakers want to see any real improvements at the agency.

“A one-time fix is not what the agency needs because it’s been deteriorated over many years,” said former IRS Commissioner Charles Rossotti. 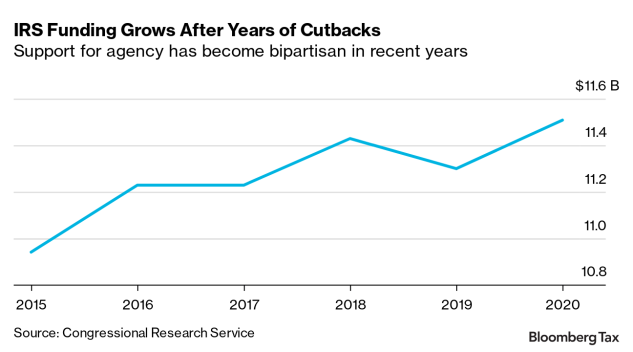 A better-funded IRS could help the Biden administration achieve its goals of ensuring companies and wealthy individuals are paying their fair share of taxes without raising tax rates—a challenge given the slim majority Democrats hold in the Senate and the lack of Republican support for tax hikes.

Republicans like Ways and Means member Adrian Smith (R-Neb.) want the IRS to maximize its potential. In an email statement Monday, he said that lawmakers should understand that any time the IRS is required to take on added tasks, such as mailing monthly checks to families with children, it makes it harder for the agency to focus on accurately collecting taxes.

Rep. Steve Womack (Ark.), the top Republican on the House Appropriations Financial Services and General Government Subcommittee, at a hearing Feb. 23 indicated he was open to a funding increase but wanted assurances from the IRS that the money wouldn’t be wasted.

Rep. Mike Kelly (R-Pa.), a member of the Ways and Means, said in an email Monday that his priority is ensuring the IRS has the resources it needs to be more customer-service oriented and responsive to Americans.

“Funding is only a small part of the larger picture,” he said.

The agency’s budget is about 20% below its 2010 peak, DeFazio said in a statement announcing the bill.

The bills are an attempt to close the tax gap, the difference between what taxpayers owe and what they actually pay on time. The IRS estimated the annual net tax gap from 2011 through 2013 was $381 billion, which is likely closer to $600 billion today, former IRS officials said.

Money for IT, Training

More resources could help the IRS try and close the tax gap by increasing staffing and making IT improvements.

Requiring more data from financial institutions and other third parties would also be an inexpensive way for the IRS to lessen the tax gap, according to Rossotti, who along with former IRS Commissioner Fred Goldberg, have suggested requiring banks to provide an annual summary of deposits and withdrawals to the top earning 25% of taxpayers with business income.

The agency would get more money to improve its aging IT systems under the Khanna and DeFazio bills.

The IRS has begun implementing a six-year plan for modernizing its systems, which it said would cost about $2.3 billion to $2.7 billion. Rettig at the Feb. 23 hearing said the agency has only received about half of the funding it requested for the first three years of the plan.

The IRS has also presented to Congress a plan that would reorganize the agency, improve customer service, and enhance employee training, as required under a 2019 law. The plan has an estimated price tag of $4.1 billion.

The IRS’s staff has been reduced by about 20,000 employees since 2010 because of the budget cuts.

Rettig earlier this month said the agency can begin rebuilding its workforce with more funding but will need time to train and bring new hires up to speed before they can be effective.

Employees with highly technical jobs, such as auditing complex returns of high-income individuals and corporations, may not be fully effective until their second year on the job, said Mike Dolan, national director of IRS policies and dispute resolution at KPMG LLP and a former deputy commissioner at the IRS.

Some more immediate improvements, however, could be made with more funding, such as improving the IRS website and staffing the agency’s phone lines so it can be more responsive to taxpayer questions on the filing season and recent Covid relief, said Rossotti, now a senior adviser at private equity firm The Carlyle Group.

If Congress boosts the agency’s funding, then it’s on the IRS to spend it properly—and on Congress to hold the agency accountable, said Goldberg, of counsel at Skadden, Arps, Slate, Meagher & Flom LLP in Washington.

“Now is the time to reinvest in the infrastructure of our tax system,” he said. “And it feels like folks are prepared to take that jump.”