Schumer at the Capitol on Wednesday.
Photographer: Ting Shen/Bloomberg

Senate leaders may look to a power-sharing agreement forged two decades ago as they begin negotiations over the daily running of the chamber and its committees, as Democrats’ two victories in Georgia this week will lead to a 50-50 seat split.

Democratic Leader (D-N.Y.) is in line to be majority leader after President-elect Joe Biden is sworn into office Jan. 20, with Vice President-elect Kamala Harris able to break tie votes. He said changes in how the Senate is run can’t be made until Georgia certifies the wins of Democrats Raphael Warnock and Jon Ossoff, the new senators are sworn in, and Harris presides over the Senate.

“But I look forward to sitting down with Leader McConnell, and we have a lot of things to discuss,” Schumer told reporters. 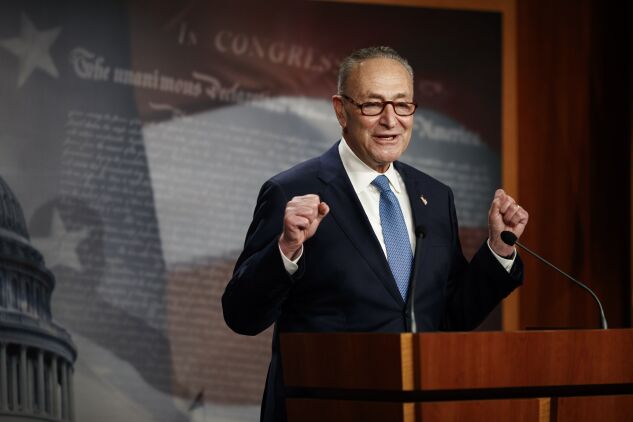 Both Democrats and Republicans said a starting point is likely to be the agreement used by the parties in 2001, when they were also at parity and Vice President Dick Cheney provided tie-breaking votes to get Bush administration priorities through. Trent Lott (R-Miss.), who was then the Republican Senate leader, said he and former Democratic Leader Tom Daschle (D-S.D.) created a plan that extended to committees and provided equal resources for both parties.

“It started with the judgment that it was 50-50 and that at committees there would be an equal number of Republicans and Democrats. The chairmanship would still be with the Republicans because we did have the 51st vote with the vice president,” Lott said in an interview. “We also split the resources for the committees equally except there was a kicker included for the chairman to hire a receptionist out front and so forth.”

Lott said the plan that he and Daschle spent a considerable time working out wasn’t an easy sell to his own conference, who feared it gave Democrats more power than was justified. But the arrangements helped the GOP get many of President George W. Bush’s priorities enacted, he said.

“Things started happening. We did a tax cut. We did appropriations bills, defense bill. We even did the No Child Left Behind education bill,” said Lott, who is now with the firm Crossroads Strategies.

The model “was a sensible one and I think still could be used by Schumer and McConnell to work things out,” said Ross Baker, a political scientist at Rutgers University who was a fellow in the office of former Majority Leader Harry Reid (D-Nev.).

But Lott cautioned that such a deal may be harder to come by in this more polarized era.

“The key was to be able to work together between the two respective leaders and that will be the challenge for Mitch McConnell and Chuck Schumer,” Lott said. “I don’t think they have as good a relationship as Tom and I did so that will make it even more difficult.”

Before talks get underway with McConnell, Schumer is likely to first hold discussions with his expanded caucus to take Democrats’ temperature on power-sharing proposals, aides said. Schumer said there’s pent-up demand to have more say in developing legislation.

“They haven’t really been allowed to participate and put legislation on the floor,” Schumer said of Democrats. “All that talent that’s been bottled up for so long will be unleashed, and you’ll see amazing things coming out of our new chairs and subcommittee chairs.”

Democrats would chair committees even under a 50-50 power-sharing plan that had committee memberships equally divided.

Schumer could face pressure from Democrats not to be as generous as Lott was when he and Daschle made their plans 20 years ago, said Stewart Verdery, who previously worked for Lott’s top deputy, former Sen. Don Nickles (R-Okla.). But the Monument Advocacy lobbyist said moderate Democrats are likely to push for such a power-sharing deal.

“My sense is there’s going to be enough interest among Sens. (D-W.Va.), (I-Maine), (D-Del.), and others that there will be at least attempts to negotiate a power-sharing agreement,” he said in an interview.

Verdery and others said Republican moderates with whom Biden hopes to work, such as Sens. (R-Utah) and (R-Maine), could also be part of the behind-the-scenes negotiations. And Verdery added that McConnell could argue that decades-old precedents are still relevant, given that a year ago the two sides agreed to use procedures drawn from the Clinton impeachment to control how the Senate impeachment trial of President Donald Trump was handled.

“I’m sure he’s going to try to use that argument again,” Verdery said.

Bill Hoagland, who served as the Republican staff director of the Senate Budget Committee during the previous 50-50 plan, said the budget panel then had 11 members on both sides, including former Sen. Pete Domenici (R-N.M.) as chairman. Resources were equally divided, and the majority leader was enabled to bring legislation to the floor even if there was a tie.

“We were able to pass a budget resolution and a budget reconciliation bill that put into place a tax cut,” said Hoagland, a senior vice president at the Bipartisan Policy Center, which is hosting a moderated discussion with Daschle and Lott on Monday about navigating an evenly divided Senate.

Under budget reconciliation, simple majorities are enough to advance fiscal related measures. But other items also can be passed using the process if Democrats remain united in the effort.

Both Hoagland and Baker described whatever arrangement Schumer and McConnell agree to as fragile.

“The question is whether it will last for the entire 117th Congress or only a few months,” Hoagland said. “That’s the big unknown.”

Jeffords, he said, “became disenchanted with how he was being treated in the Republican conference and became an independent,” Baker said. “And then of course your new work situation just didn’t last.”

To contact the reporter on this story: in Washington at nognanov@bgov.com

To contact the editors responsible for this story: at broth@bgov.com; at ktrygstad@bgov.com