It's shaping up to be a frustrating U.S. tax season, particularly for the newly self-employed and those who claim the child tax credit.
Photographer: Michael Nagle/Bloomberg

In what even the U.S. Treasury says will be a frustrating tax season, families claiming the child tax credit and newly self-employed Americans are among filers likely to see the biggest challenges this year.

The season starts Monday, and while Internal Revenue Service teams have been working “non-stop” for several months, years of funding and personnel cutbacks, along with a backlog of several million tax returns from previous years, will hamper the agency’s abilities to respond as swiftly as in the past.

With slim chances of reaching the IRS by phone, recipients of the child tax credit may face particular issues. Half of the up-to $3,600 credit per child for 2021 was already distributed via monthly payouts, meaning the credit should be half the size of last year’s. Taxpayers will also need to report the dollar amount for what they already got in 2021 -- as stated on a mailed IRS form that they might or might not have received, opened and saved.

For those who drew on unemployment insurance last year and started their own small business or “side hustle,” returns are especially complex, tax accountants say. And businesses counting on an employee-retention perk might not have noted that this benefit ended three months early.

“The pandemic and the staffing shortages and budget cuts over the years -- it’s all added up to kind of create this perfect storm of just a disappointing tax season,” said Bryan Cannon, CEO of Cannon Advisors, a Charlotte, North Carolina-based financial advisory services firm. “It’s been an open wound that’s been occurring for a while, and the pandemic has basically dumped salt on it.” 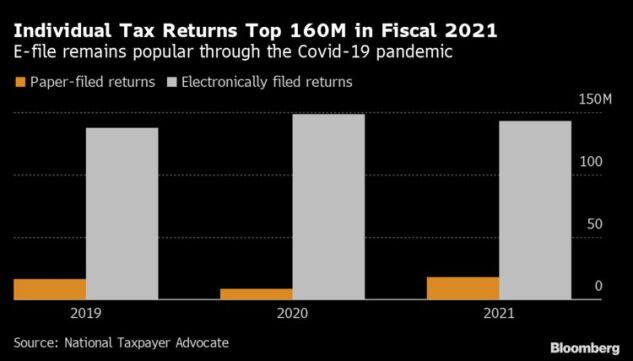 The tax agency launched the start of tax season -- which runs to April 18 for most taxpayers -- with a warning that tax refunds could be delayed past the typical three-week turnaround time. That’s a blow to households struggling to cope with an inflation surge and the omicron wave that’s kept some people out of work.

“Every person at the IRS is highly focused on this,” IRS Commissioner told reporters Monday about quickly issuing refunds. “I get that highly focused doesn’t direct deposit somebody’s refund, but I want you to know that the importance of this is not lost of any of us.”

Lawmakers are looking at ways to ease pressure on the IRS, but help may not come quickly, with President ’s economic agenda -- which contains $80 billion for the agency -- stalled in the Senate.

Senate Finance Committee Chairman said he is considering more ways to make the filing season easier, including a possible extension of the filing date. He said he is also looking at ways to grant the IRS more money to fund taxpayer services, though it’s unclear how easily Congress could quickly pass any such measure.

The IRS is sending letters to taxpayers that received the advance child tax credit payments in 2021 to let them know how much in total was sent to them. Recipients will need to state that number on their returns, and if there’s a discrepancy, or math mistake, that will trigger an error from the IRS that could cause delays in refunds, require an amended return, or penalties and fees.

Taxpayers not used to receiving or opening mail from the IRS may toss the letter and be surprised when they have to reconcile it on their return, , head of consumer tax at H&R Block said.

The IRS recommends making sure that all documents from employers, financial institutions and the IRS are collected before filing a tax return to avoid any mistakes that could delay a refund being processed. The agency also says it can more quickly review returns that are submitted electronically, and urges taxpayers to receive their refund via direct deposit, rather than paper check. 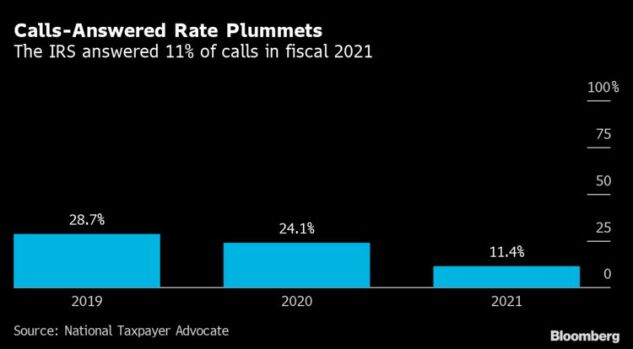 Any mistakes could mean refunds are held up indefinitely until the IRS can review forms by hand.

While many taxpayers will receive a larger child-tax credit than in previous years -- up to $3,600 compared with $2,000, thanks to the pandemic-aid bill’s expansion of the benefit -- only half of it is due in the form of refunds, because of the monthly payouts that ran from July through December 2021.

“Some people are not getting as much as they anticipated, and they aren’t understanding it.” Christina Brown, a Florida-based tax preparer, said. “I’m dreading telling clients that their refund is not as big this year.”

Taxpayers who have questions or problems will find it tough to get IRS answers. Agency representatives were only able to answer 11% of the 282 million incoming calls last year, according to a report this month from the Taxpayer Advocate Service. 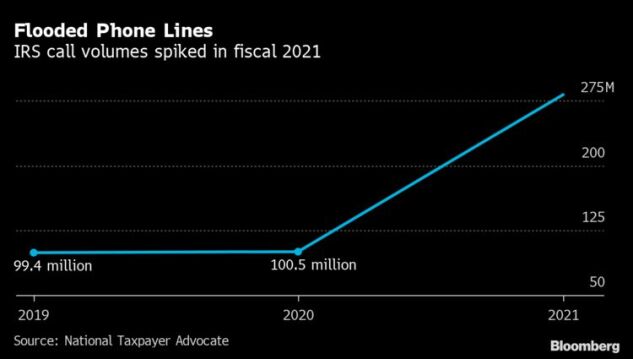 This filing season is also likely to be tricky for many who started their own ventures last year. On the other side of the record quit rates seen in 2021 was a jump in the number of small businesses and self-employed taxpayers. A record 5.4 million new business applications were filed in 2021, an increase from the previous record of 4.4 million submitted in 2020, according to the U.S. Census Bureau.

That will add more pressure and complexity for people having to file taxes as business owners for the first time.

“When we look at our consumer trends data from the prior-year tax returns, what we saw was four to six times the number of clients taking unemployment, and starting their own side hustle or small business. And those both have substantial implications for the tax return and create a lot of uncertainty and need for help,” H&R Block’s Orosco said.

Businesses also have to be aware of all the tax laws and regulations that have changed.

Most notably, the employee retention credit, a tax perk designed to encourage businesses to keep employees on payroll, ended three months early in 2021 -- something Congress did to help pay for the infrastructure package enacted late last year.

“We have to educate ourselves as to what the tax rules are and help clients understand if they qualify or not, what it means to them,” Cannon said. “It’s not a fun situation for us either. I mean, the IRS is frustrated but I can tell you certainly, so are the tax preparers around the country.”

While returns are usually due April 15, this year that day falls on a Friday District of Columbia holiday, postponing the deadline to April 18 for most. Taxpayers in Maine and Massachusetts have until April 19 thanks to the Patriots’ Day holiday in those states.