The financial strain of the Covid-19 pandemic may have some individuals considering early withdrawals from retirement accounts.
Jonathan Hurtarte/Bloomberg Law

Cracking open retirement accounts to claim the $100,000 in emergency cash authorized by the new stimulus law could compound a leakage problem that already shrinks lifelong assets up to 25%.

Benefits professionals say individuals should avoid taking advantage of a perk with short-term benefits that diminish over time. Some fear the most vulnerable, such as low-income families in desperate need of a boost, may never recover from inopportunely burning through their scant assets.

“This is the last thing in the world you want to do,” said Boston College’s Center for Retirement Research Director Alicia Munnell, whose research, based on Vanguard data, shows that 1.5% of assets leak out of retirement accounts each year. She estimates that the constant drip, whether it be from participants cashing out after leaving a job, taking traditional hardship distributions, or withdrawing money via plan loans, drastically reduces overall savings.

Political leaders tend to widen access to qualified retirement plans such as 401(k)s when disaster strikes, and the response to the Covid-19 outbreak goes farther than before. The new law (Public Law 116-136) repealed early withdrawal fees, allows for repayment of the $100,000 in emergency withdrawals, and relaxes rules on retirement plan loans for those financially affected by the global pandemic.

Researchers at the nonpartisan Government Accountability Office found that minorities and lower-income households rely more heavily on hardship distributions to get by than other groups.

“It’s good, in theory, that people can repay the money,” she said of the small window. “But they’re probably not going to be in any position to do so.” 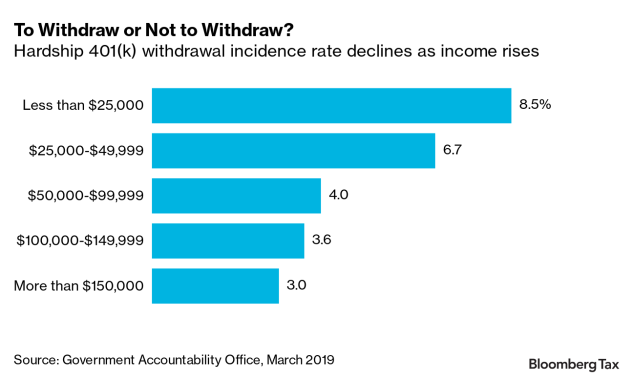 Individuals tapping into their accounts early wouldn’t be without precedent: Fidelity Investments, which manages 17.3 million 401(k) accounts across almost 23,000 employers, saw small upticks in withdrawals during the financial crisis and 9/11 terrorist attacks, said Meghan Murphy, vice president of Fidelity Investments. The firm now expects outflows from workers in some of the hardest-hit industries, Murphy said.

“These are unprecedented times,” Murphy said.

Still, others in the financial services industry expressed few fears that employees would tap their 401(k)s and IRAs for short-term cash.

“I’m not concerned about waves of outflows,” Nathan Voris, senior managing director for Schwab Retirement Plan Services said. “We’ve never experienced that in the past.”

Voris said his firm and peer institutions are reassuring clients that their money is safe and accessible should they need it.

Some plan designs allow workers to withdraw money for a certain period of time with the expectation they will pay it back as a loan arrangement. The relief package passed by Congress allows plan holders to pay back their retirement accounts up to three years, or pay taxes and penalties on the amount not paid back.

“We do see the activity ticks up a bit in the wake of financial stresses, but still, fewer than one in five people at any point in time have taken advantage of that,” said Sarah Holden, an economist at the Washington-based trade group Investment Company Institute, referring specifically to loan withdrawals.

In the aftermath of the 2008 financial crisis, few people dipped into their retirement accounts to hold them over in the recession, Holden said. According to the group’s research, 3.7% of defined contribution plan participants took any withdrawal between January and October in 2008. That number fell to 2.6% between January and September in 2009.

One thing plan sponsors could do to keep retirement funds from crumbling: not offer the optional benefit, at least not immediately.

Employers could adopt the expanded plan loan provisions which allow account holders to lend themselves up to $100,000 automatically repaid over five years via payroll deductions, and delay payments on new loans for one year, said Mark Iwry, a nonresident senior fellow at the Brookings Institution and a former Obama-era Treasury deputy assistant secretary for retirement and health policy.

The new law gives plan sponsors until 2022 to amend their programs.

Iwry urged plan administrators to provide detailed disclosures explaining: emergency withdrawals are discretionary; plan loans have same ceiling as coronavirus relief, plus two more years to pay it back; and that the payroll deduction feature for plan loans will routinely replenish withdrawn funds—unless the borrower loses their job.

He warned that pulling money out now would harm less sophisticated investors. “If this is the temporary market dip we all hope it is, the $100,000 withdrawal option is an inducement to sell low – and later, buy high,” Iwry said.

“Because of the uncertainty about how repayment of coronavirus-related distributions will be handled, and the tax impact of such repayment, it may be advisable for participants to take loans first,” she wrote online.

If thinking through all this seems like a headache now, individuals should consider the mental gymnastics that’ll be required to replace the money once it’s already spent.