The unveiled an unprecedented stimulus plan to tackle the worst recession in living memory and underwrite struggling Italy’s membership of the 27-nation bloc.

The government in Rome stands to receive 82 billion euros ($90 billion) in emergency grants and up to 91 billion euros in low-interest loans from the package that could be worth as much as 750 billion euros in total, according to an official who asked not to be named. The program, which still needs to win the backing of member states, would be funded by joint debt issuance in a significant step toward closer financial integration, according to details of the proposal posted on the commission’s website.

“This is Europe’s moment,” Commission President said. “Our willingness to act must live up to the challenges we are all facing.” 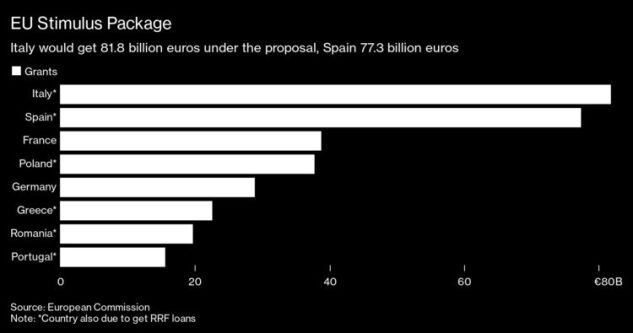 Italy led Europe’s peripheral bonds higher, with 10-year yields dropping as much as nine basis points to 1.46%, the lowest level in almost two months. German bonds fell as investors pared bets on a potential EU breakup, while the euro climbed as much as 0.5% to $1.1031, the highest since April 1.

Von der Leyen has spent weeks trying to come up with a response to the crisis which has shaken the foundations of the European Union. Her challenge was to win round skeptical member states like the Netherlands and Austria in the richer North while generating enough firepower to turn around Italy, where spiraling public debt has raised questions about whether the country will be able to sustain membership of the euro or even the EU itself. 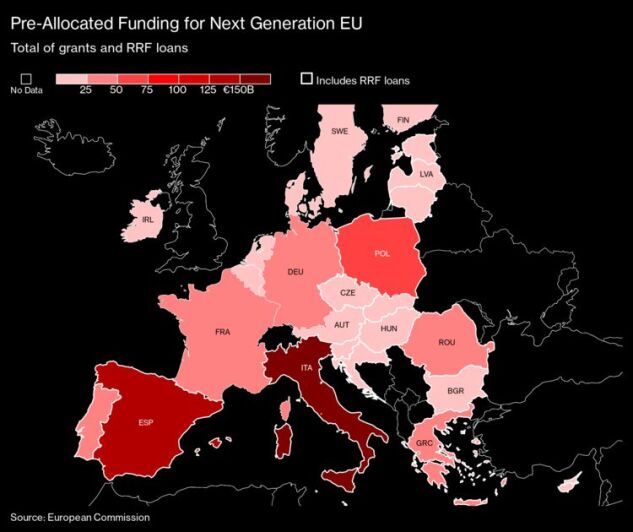 The news offered relief in Italy, the original European epicenter of the coronavirus, where the government felt abandoned by the EU at the start of the outbreak and fought to contain a surge of anti-EU sentiment. Rome however wants to see what the criteria would be, and under what programs such funds would be earmarked, according to two senior government officials.

The long-anticipated blueprint will form the central plank of the EU’s response to the devastating impact of the coronavirus pandemic. The outbreak, which has claimed hundreds of thousands of lives around the world, has hit every European economy, with the worst-affected predicted to contract by almost 10% this year.

If von der Leyen can win the backing of member states, it would be a watershed moment for the bloc, where financial burden sharing has long been one of the thorniest issues that’s held back deeper integration. It could quell concerns that a lack of solidarity is empowering populists threatening the EU’s very survival.

Leaders will discuss the proposal at their next scheduled summit on June 19, EU Council President said in a tweet.

But talks are expected to be difficult, not least because negotiations on the recovery fund will be intertwined with discussions on the EU’s next seven year budget. Along with the recovery plans, the commission proposed a revamped budget of 1.1 trillion euros for the period starting in 2021.

German Chancellor said that she doesn’t expect leaders to endorse the commission’s proposal when they discuss it in June and that the negotiations won’t be easy.

“The goal must be that we find enough time in the fall for national parliaments and the EU parliament to debate the items so that they can all take effect on Jan. 1, 2021,” she said at a press conference in Berlin.

“We must move quickly and adopt an ambitious agreement with all our European partners,” France’s said in a tweet. Spanish Prime Minister echoed Macron’s call for a swift agreement and called the commission’s proposal “a basis for negotiation.”

Leaders spent more than 28 fruitless hours negotiating over the budget in February before calling it a day. Things are now different though, as the virus-induced recession has dramatically changed both the economic situation and policy priorities of EU countries and the urgency to reach an agreement is greater than ever.

The balance between loans and grants is expected to be among the most hotly debated issues between EU governments in coming months, as will the allocation criteria that will determine how much money each country will end up getting.

An agreement could relieve some of the pressure on the , which has so far taken the lead in the EU-level response, pledging to buy more than a trillion euros of debt to stabilize markets.

The commission’s proposal follows a joint push by France and Germany earlier this month that asked for the EU to borrow 500 billion euros that could then be allocated as grants. The initiative marked a stunning volte-face for Berlin and signaled a major shift toward bolstering the union’s financial power.

Giving help via grants rather than loans has been a key ask by hard-hit EU countries such as Italy and Spain, where increased borrowing to fund the recovery could quickly push debt to unsustainable levels. But even with Germany’s blessing, the plan is facing pushback by the bloc’s more stringent members as well as small nations in the region’s east.

Austria, Denmark, the Netherlands and Sweden have signaled their resistance to handing out too much money as grants and said they will look closely at the conditions attached to any aid. The reaction from those capitals was moderate all the same, signaling they are willing to discuss a compromise around the proposed framework even if some key details remain contentious.

“This is the starting point for the negotiations,”Austrian Chancellor said in a statement. “What’s positive is that the payments from the recovery fund have a clear time limit, and that this guarantees they aren’t the start of a permanent debt union. What still needs to be negotiated is the size and the split between grants and loans.”

(Updates with comment from Austrian chancellor in last paragraph)