Voters across the country will have the opportunity to change tax policy when they head to the polls Nov. 6.

Much attention will focus on Congress, where Democrats are hopeful they can take back control of the House for the first time since the 2010 midterms. Scrutinizing the 2017 tax law and seeking President Donald Trump’s tax returns will be high on the list of Democratic priorities if they regain the House.

There also are various state and local ballot measures that would alter the tax code, including tax increases for high earners and companies in several states and initiatives on legal marijuana and gambling that would boost revenues. Here are 10 issues Bloomberg Tax will be watching:

California voters will consider a number of state and local tax policy changes.

Proposition 6 is a state-wide measure to watch. It would reverse $54 billion in tax hikes enacted in 2017 to fund road, bridge, and transit repairs. It would repeal new sales and excise taxes on diesel fuel and gasoline and require any future fuel tax increases to receive voter approval.

Bay Area voters will be considering several initiatives that would impose unique taxes on businesses and landowners:

Troy Van Dongen, a San Francisco-based partner at McDermott Will & Emery, told Bloomberg Tax that he doesn’t “see the end in sight” of tax initiatives in California.

“The pace really hasn’t stopped, its only picked up,” he said. “Although we will hear outcry whenever there’s a new measure that’s proposed, we can’t ignore the fact that these measures are getting passed and more are coming.”

Voters in Colorado and Maine will weigh whether to raise income tax rates on high earners.

Colorado proposed constitutional amendment 73 would replace that state’s flat income tax with a new five-bracket system. The tax changes would generate an estimated $1.6 billion in additional tax revenue in the first full year of implementation, according to the Colorado Legislative Council.

Individual filers making less than $150,000 a year in income wouldn’t see their tax rate change, but everyone above that threshold would pay more.

Maine Question 1 would establish a new 3.8 percent tax on wages and combined household income for taxpayers who made more than $128,400 in 2018. The revenue would go towards a new program to provide in-home and community support services to the state’s elderly and disabled.

Voters in Florida and North Carolina will consider changing their state constitutions to make it more difficult for lawmakers to raise taxes.

Florida Amendment 5 would require any future tax increases to be approved by a two-thirds vote in the state’s House and Senate. Currently the Florida constitution requires a three-fifths vote of the legislature for any increases in the corporate income tax rate above 5 percent.

A North Carolina amendment would constitutionally cap the state’s personal income tax rate at 7 percent. That wouldn’t have an immediate effect on tax rates because the rate is already set to drop in 2019 to 5.25 percent. But the lower cap would make it more difficult for the legislature to raise income taxes in the future.

Missouri would raise its gas tax for the first time since 1996 if Proposition D passes.

The ballot measure would incrementally raise the gas tax from 17 cents to 27 cents per gallon over four years. The state estimates the measure would bring in $288 million annually for the state to fund law enforcement efforts and $123 million for local governments to fund road construction and maintenance.

Utah voters will be asked to weigh in on whether the state’s gas tax should rise to fund education and local roads. Nonbinding Opinion Question 1 asks whether state motor and special fuel tax rates should be increased by an equivalent of 10 cents per gallon.

Legal marijuana is on the ballot in four states, each of which would treat the drug differently under the tax code.

Michigan Proposal 1 would legalize recreational marijuana and tax its sales at 10 percent. The state estimates it would generate $737.9 million in additional tax revenue in the first four years.

North Dakota Measure 3 would legalize recreational marijuana use, but the tax implications are unclear. State and municipal sales taxes would apply to the drug, but the legislature could still amend the measure to add an additional sales tax if voters approve it.

Missouri has three proposals for medical marijuana on the ballot: 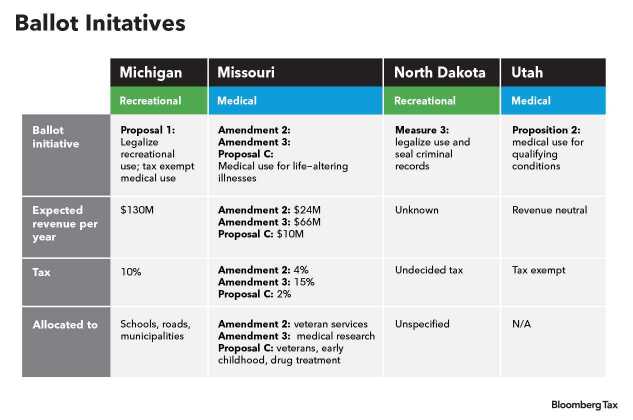 Voters in the Pacific Northwest will weigh whether to prohibit new taxes on groceries.

Washington Initiative 1634 would bar cities from establishing new or increased local taxes, fees, or assessments on raw or processed foods, beverages, or their ingredients.

Oregon Measure 103 would make it unconstitutional to enact taxes or fees on transactions for groceries at the state or local level.

The beverage industry is backing both ballot measures. Coca-Cola Co., PepsiCo Inc., and Keurig Dr Pepper are the biggest financial supporters of a campaign in support of Initiative 1634. The American Beverage Association is the biggest contributor to a campaign supporting Measure 103.

A candidate’s plan to cut taxes has shaped the race to succeed Connecticut Gov. Dannel Malloy.

Republican Bob Stefanowski is promising tax cuts and limited government spending. He has proposed to eliminate state gift and estate taxes immediately, phase out corporate income and business entity taxes over two years, and phase out the state income tax over eight years.

Democrat Ned Lamont has countered with a proposal for a modest property tax credit. Lamont called Stefanowski’s income tax plan “reckless” and said the only way to do it would be to cut state services and increase property taxes.

Nevada Question 2 would add feminine hygiene products to a list of medical and health products exempt from sales tax.

Nevada would become the 10th state to create such an exemption for tampons and sanitary pads. Supporters say the policy is needed to offset the “pink tax”—the higher cost of products marketed specifically to women.

Cigarette taxes could be on the rise in South Dakota and Montana.

South Dakota Initiated Measure 25 would increase the tax on a pack of 20 cigarettes by $1 and boost the tax on cigars, chewing tobacco and other tobacco products from 35 percent of the wholesale price to 55 percent. That would boost state tax revenue by about $25 million per year, with the first $20 million in revenue to be used for reducing tuition at state technical institutes.

Montana Initiative 185 would raise the state’s taxes on all tobacco products to fund health programs and extend the state’s expanded Medicaid program. The measure would increase taxes by $2 per pack for cigarettes and hike taxes on e-cigarettes and vaping products.

Those increased tobacco taxes would boost Montana revenues by $74.3 million per year by 2023, according to the Montana Secretary of State.

Expanding betting in Arkansas could generate $120 million in annual tax revenue, according to supporters of a ballot measure.

Supporters are touting tax revenue from casinos as a way to fund road repairs, although the state transportation agency has cautioned that the ultimate use of the money is still an open question.

“In a nutshell, none of that money goes to highways,” Arkansas Department of Transportation spokesman Danny Straessle told Bloomberg Tax in September. “It all goes to the state’s general fund.”

To contact the reporter on this story: in Washington, D.C. at pambrosio@bloombergtax.com

To contact the editor responsible for this story: at rdaigle@bloombergtax.com

Patrick Ambrosio
Assistant Managing Editor
What Democrats Want to Do on Taxes If They Win the House
Tax Hikes for Big Earners, Companies on State Ballots Next Week
© 2022 Bloomberg Industry Group, Inc.
All Rights Reserved