While the IRS has called back some of its employees, the real work lies ahead as the agency navigates a buildup of collection work and a changed world.
Photographer: Zach Gibson/Getty Images

The tax collection backlog at the IRS has been building for years, worsening with each budget cut and workforce reduction. The coronavirus pandemic could make that hole—billions of dollars of uncollected money—even worse.

That’s because the agency has put much of its enforcement activity, including some audits, tax liens, and levies, on hold to help people who are in economic distress or unable to meet tax obligations because of Covid-19. That pause, paired with limited ability to receive phone calls and mail, a reopening plan that will have to play out in phases, and hastily enacted virus relief creating new complexities, means the agency’s audit and collection work may be jammed for years to come.

“You have the backlog and then you have the ongoing economic hardship that big sectors of the economy will be under,” said former IRS Commissioner Mark Everson, who is now vice chairman of alliantgroup LP. “It’s not a case of there’s just a pause here and everybody’s gonna go back to business as normal.”

Recent funding increases have helped the IRS begin hiring more employees to backfill positions, but the agency is also losing more and more employees to retirement each year. It also takes time to bring new hires up to speed. Jeffrey McNeal, a former IRS revenue officer who now works at the software company Canopy Tax Inc., said new revenue officers generally require about a year of training before they’re fully prepared for the job. 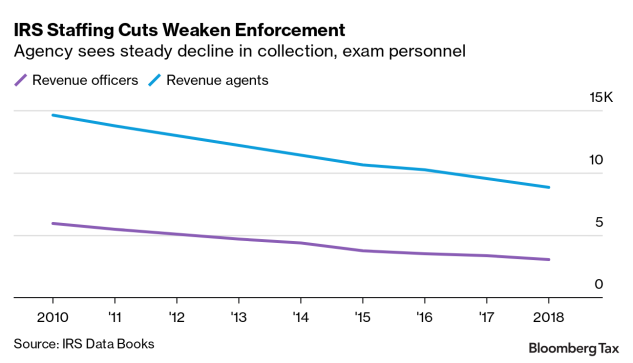 Adding to these challenges is the fact that businesses, individuals, and the IRS have to adjust to the rules of new relief measures from Congress, which could lead to mistakes that add to the agency’s workload.

Recently enacted relief includes the employee retention credit, a tax break for businesses that keep employees on their payroll during the pandemic, and the Paycheck Protection Program to provide small businesses with loans that can be fully forgiven if the funds are used to cover certain expenses.

Businesses can start taking advantage of these benefits immediately but there’s a lot to digest. The IRS has posted more than 90 frequently asked questions on its website dealing with just the employee retention credit.

“I think that’s going to lead to a lot of issues,” said Michael Raanan, a former IRS revenue officer and the founder and president of Landmark Tax Group. He expects the provisions, with all of the requirements that must be met, will lead to more audits that can turn into collection actions.

Further complicating matters is the fact that lawmakers and Treasury have been disagreeing on how to implement some of the stimulus measures. Treasury and the IRS, for example, have said businesses can’t deduct expenses that are normally deductible under the tax code to the extent they were reimbursed by a PPP loan that was forgiven. The stance has led to backlash from Democratic and Republican lawmakers, and the differing opinions could create confusion for taxpayers. Treasury in a letter Thursday said it was considering lawmakers’ concerns.

Former National Taxpayer Advocate Nina Olson equated the new Covid-19 relief to stimulus measures enacted during the 2008 financial crisis, including the first-time-homebuyer credit meant to bolster the residential real estate market at that time. To claim the credit, taxpayers had to navigate a series of complex rules and requirements, which led to honest mistakes, Olson said in written testimony for a 2010 congressional hearing.

As the agency starts to bring back workers to sift through its backlog it should prioritize existing work before tackling any new cases, Olson said.

Particularly important are audits that are holding up taxpayer refunds, she said, pointing to many ongoing audits of earned income tax credits, refundable credits for working people with low to moderate incomes. That tax break can mean a difference of thousands of dollars, which could be crucial for families right now, Olson said.

She empathized with the difficult decisions the agency has had to make and the long road ahead, saying the IRS made the right call freezing enforcement activities but that it’s likely to face criticism from its watchdogs for lost revenue.

The volume of collection cases will likely balloon as more individuals default on existing tax payment plans because their financial situations have worsened, the IRS resolves fewer cases in the near-term because of its enforcement freeze, and new cases continue to build up, Raanan said.

The agency already has a massive backlog of collection cases that, aside from a slight drop from 2017 to 2018, has been growing every year since 2010. At the end of fiscal year 2018, its inventory of taxpayers who owed money topped 13 million cases for a total of about $128.2 billion of unpaid taxes, interest, and penalties—not including extra interest and penalties that may have accrued since the debt was assessed.

One way the IRS could make collection more efficient is to allow taxpayers and their advisers to view their total outstanding liabilities and tax issues online, which would prevent them from having to use the agency’s collection phone lines to get that data, Raanan said. That would free up call center employees to spend more time resolving cases instead of tracking down that information, he said.

More funding from Congress to increase staffing would also help the IRS carry out its collection and audit activities—at a time when the government needs revenue more than ever to offset the trillions of dollars being spent on stimulus measures, said Robert E. McKenzie, a former IRS revenue officer and now partner at Saul Ewing Arnstein & Lehr LLP in Chicago.

“It just stands to reason that if you want to in some way reduce these large deficits and to overcome this huge backlog you have to have staffing,” he said.