U.S. House Speaker Nancy Pelosi sat down with Treasury Secretary Steven Mnunchin Wednesday and spoke with him several times by phone again Thursday to hammer out a stimulus package. Above: Pelosi, a Democrat from California, center, at the U.S. Capitol in Washington, D.C. on Oct. 1, 2020
Photographer: Stefani Reynolds/Bloomberg

U.S. stimulus talks remain on life support after the House passed a Democrat-only $2.2 trillion package that did nothing to bridge the gap with Republicans.

The 214-207 vote, which garnered no GOP support, followed the most concerted talks between the top negotiators since early August. House Speaker told reporters Thursday evening that she would review documents that Treasury Secretary had sent her to determine where to go next.

How the talks might be affected by President ’s announcement early Friday that he had tested positive for Covid-19 is uncertain. The Treasury said Friday morning that Mnuchin tested negative. He’s been advised that he need not quarantine, based on limited contact with Trump, according to a person familiar with the matter. 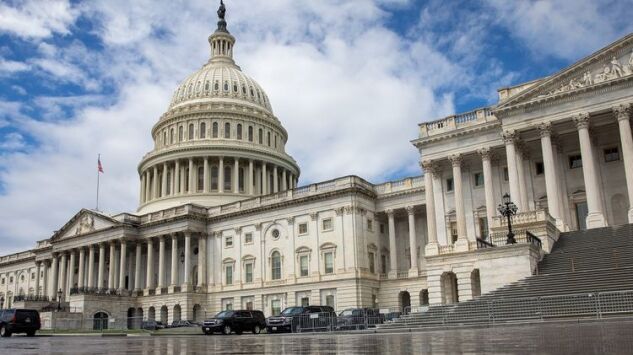 Pelosi and Mnuchin held multiple phone calls Thursday after meeting in person at the Capitol on Wednesday, amid rising pressure from a wave of job-cut announcements by large companies. “We are going back and forth with our paper,” Pelosi said Thursday, underscoring the importance of the language used in any deal.

Eighteen Democrats, most from swing districts, voted against the bill, arguing that passage would hinder efforts to find a bipartisan solution.

The talks have so far failed to resolve what’s been a difference of hundreds of billions of dollars between the two sides. Sharp disagreements also remain on components of coronavirus relief, with the Trump administration rejecting the scale of aid Democrats want for state and local authorities, and Pelosi demanding the end of tax breaks she says are devoted to the wealthy.

Pelosi said the House’s vote on its own bill would help present in a more public way what Democrats are unified in “pushing for” in the negotiations. Republicans in the Senate, where they have a majority, attempted to pass their own package last month -- a $650 billion plan, nicknamed the “skinny” package, that was blocked by Democrats.

With the presidential and congressional elections 32 days away and Congress expected to go on recess beforehand for the final leg of the campaign, time is running short. Private economists have already cut their growth forecasts for the fourth quarter after the failure to find a compromise on another fiscal package. 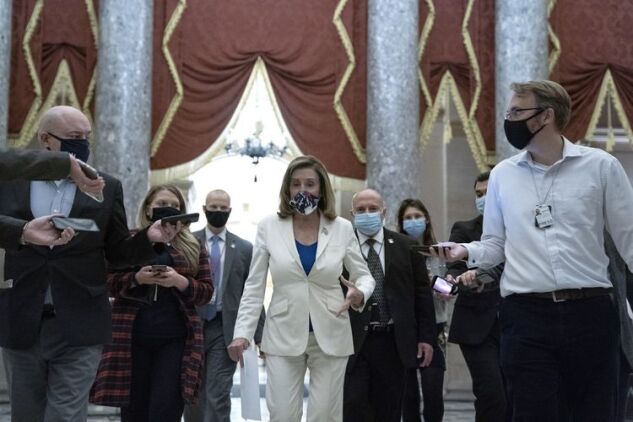 Nancy Pelosi, center, speaks to reporters as she walks to her office at the U.S. Capitol in Washington, D.C., on Oct. 1.
Photographer: Stefani Reynolds/Bloomberg

Economic data are already showing the fading impact of the $2 trillion stimulus enacted in March. Americans’ incomes fell in August by the most in three months after the government’s supplemental unemployment benefits expired, a showed Thursday.

Although Trump and his aides have continued to express confidence in the recovery, major companies have announced job cuts in recent days. said Tuesday it’s slashing 28,000 workers, said Wednesday night it would begin to furlough 19,000 employees and is planning to cut more than 13,000.

“People say we should have a skinny package -- no, we don’t have a skinny problem. We have a massive problem,” Pelosi said on the House floor Thursday.

Democrats reduced their stimulus demands from a $3.4 trillion bill the House passed in May. But the legislation approved Thursday is still more than Republicans have said they could accept. Also, Senate Majority Leader said earlier that it was rife with “poison pills” that have nothing to do with pandemic relief. 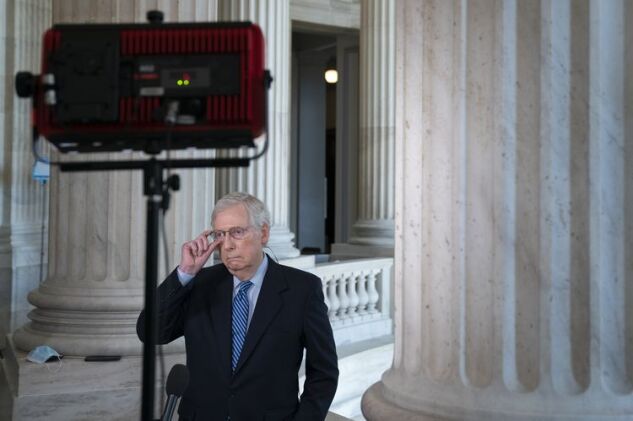 House Republicans cast the bill as pure political messaging, more of a left-wing, campaign-year wish list that showed how far apart the two sides are than genuine legislating.

Top Appropriations Committee Republican of Texas characterized the package as a “damaging partisan bill.” She said it “was crafted without the input from members on our side of the aisle and does not have the support needed to pass the Senate or be signed by the president.”

Mnuchin said Trump instructed his negotiators “to come up significantly” from the initial GOP proposal of a $1 trillion pandemic relief plan.

They offered Pelosi a maximum of $1.6 trillion, some of which was covered by unused small business relief funds, according to people familiar with the proposal.

Pelosi underscored before the House vote that she’d still work on negotiations for a bill that both the House and Senate could pass, and Trump can sign into law. “I’m hopeful that they can produce something. I never say this is the last chance.”

“We could come right back and prepare to do another bill,” assured Rules Committee Chairman of Massachusetts, if talks were to turn around.

Some House Democrats had for weeks been pressuring their leaders to allow such a vote, in lieu of a bipartisan deal, as they hit the final stretch of their re-election campaigns.

“I can’t tell how much of this is genuine effort to pass a bill and how much is position-taking prior to the election,” said Josh Huder, a senior fellow at Georgetown University’s governmental affairs institute.

Some political analysts suggest Pelosi and House Democrats have less to lose politically from a stalemate on stimulus than the White House and Republicans.

Majority Leader of Maryland told reporters Wednesday it would hurt re-election chances for a growing list of endangered Senate Republicans. And House political strategists on both sides acknowledge that some moderate Democrats from swing districts need to show that they tried to act -- although the same is true of Republicans in similar purple areas.

Job losses, shutdowns of businesses, and other potentially catastrophic economic events do not fall neatly into districts exclusively held by either Democrats or Republicans.

Polling by the Financial Times-Peterson Foundation in mid-September found 89% of those asked said another relief package was needed. As for a failure to get a deal, Democrats and Republicans were seen as equally responsible, both nationally and within so-called “battleground states.”

(Updates with Mnuchin testing negative for virus, in third paragraph.)

To contact the editors responsible for this story:
at kwhitelaw@bloomberg.net