The House Ways and Means Committee in October advanced a measure that would tax e-cigarettes like tobacco products.
Photographer: Hollie Adams/Bloomberg

Is vaping a useful way for smokers to quit cigarettes or a new health menace? That question has provoked one of the most robust debates among public-health specialists in years. The early evidence suggests e-cigarettes are much less harmful than regular ones. But an epidemic of teen vaping in the U.S. followed by an outbreak of sometimes fatal respiratory ailments linked to e-cigarettes in late 2019 has complicated the discussion. The developments have led to new restrictions on the devices in the U.S. and turmoil in the tobacco industry, which has looked to vaping products to make up for lost revenue as cigarette smoking declines worldwide.

1. How does vaping work?

E-cigarettes, first popularized in China in 2003, contain a battery-powered element that heats a liquid spiked with either nicotine, the addictive stimulant present in tobacco, or THC, the psychoactive ingredient in marijuana, producing a vapor the user inhales. Vaping is a way to ingest those substances without the smoke and tar that comes from a burning cigarette or joint. In some cases, a vaping device, such as the popular Juul, is small enough that an underage vaper, say, can palm it, discreetly take a hit when a teacher or parent isn’t looking, and breathe the resulting aerosol into a sleeve or collar.

2. How popular is vaping?

The market for vaping products was estimated at about $11.5 billion worldwide in 2018 and is growing rapidly. A quarter of U.S. high school seniors say they indulge, spurring a debate about how the sleek design, marketing and candy-like flavorings of vaping products have attracted millions of non-smokers and hooked a new generation. The U.S. Food and Drug Administration initially did not regulate them as it has conventional tobacco products. A judge required the agency to advance its deadline, to May 2020, for e-cigarette makers to submit applications for approval to keep selling their wares. 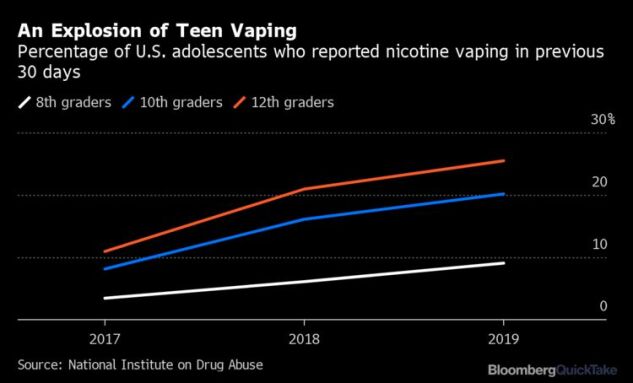 3. What’s caused the outbreak of illnesses?

U.S. health authorities are struggling to figure that out with certainty. As of Dec. 27, there had been 55 deaths and 2,561 hospitalizations for vaping-related lung injuries in the U.S. Many of the cases shared pneumonia-like symptoms and signs of chemical burns, thought it’s been difficult for health authorities to zero in on the culprit; in one analysis, 86 patients reported using 234 unique products with 87 different brand names. Regulators that the outbreak is rooted in use of black-market vaping products containing THC. A small percentage of cases have been linked to nicotine-only products.

In a study by the U.S. Centers for Disease Control and Prevention published in December, 48 of 51 patients had vitamin E acetate in their lungs, compared with none of the patients in a healthy control group. The report provides strong circumstantial evidence that vitamin E is the main culprit in the outbreak. Vitamin E acetate has been used as a cutting agent in e-liquids containing THC, often in illicit products. It may cause surfactant in the lung “to lose its ability to maintain the surface tension that is necessary to support respiration,” according to the study. When heated it may also break into another compound that irritates the lung, the authors wrote.

5. How have U.S. authorities responded to the outbreak?

The FDA Jan. 2 that effectively remove from the U.S. market all cartridge-based flavored vaping products except those that taste like tobacco or menthal. A number of states and cities had already moved to to vaping products, with some banning them outright and others blocking sales of flavored products. (Michael R. Bloomberg, the founder and majority owner of Bloomberg News parent Bloomberg LP, has campaigned and given money in support of a ban on flavored e-cigarettes and flavored tobacco.) Walmart and other big U.S. retailers announced plans to stop selling e-cigarettes.

E-cigarette sales were already banned in 28 countries, including Brazil, India, Turkey and Uganda. Under European Union regulations, the nicotine in vaping liquid is limited to about a third the strength delivered by Juul refills in the U.S. In the U.K., public health officials stood by their position that while vaping entailed risks, it was safer than smoking. Youth vaping rates are much lower in the U.K.

7. How’s the industry been affected?

The crisis merger talks between tobacco giants Philip Morris International Inc. and Altria Group Inc., which owns a 35% stake in Juul Labs, the dominant e-cigarette maker in the U.S. Juul its chief executive, and the company announced a suspension of advertising in the U.S. after the FDA warned that it had promoted its products as less risky than cigarettes without gaining agency approval. The company faces that it improperly marketed its goods, particularly to teens.

To contact the reporters on this story:
in New York at rlangreth@bloomberg.net;
in Austin at letter1@bloomberg.net

To contact the editors responsible for this story:
at tannett@bloomberg.net