One enduring legacy of the pandemic is likely to be the way it reshapes where and how we work. In the U.S., lockdowns sent some wealthy knowledge workers heading to suburbs, second-tier cities and “Zoom towns” in scenic areas near ski slopes or national parks. While most people will eventually return to an office, things might look different than before. The shift has the potential to impact office culture, labor markets, city finances and the American landscape. And it will hinge, in part, on new norms around remote work.

There were plenty of anecdotes of professionals who left the San Francisco Bay area and New York for less crowded places like Denver, Miami and Austin, Texas. LinkedIn data show that affordable cities such as Salt Lake City and Jacksonville, Florida, saw some of the biggest gains. But most people didn’t stray far, with 84% of the moves to somewhere in the same metro area, a review of U.S. Postal Service data shows. And while some city dwellers sought out more space, home prices at just about the same pace in urban and suburban areas in 2020.

2. What’s the impact on cities?

The bigger problem for many cities is not who’s leaving, but who isn’t moving in. Think of all the recent college graduates who returned home instead of renting a place near a new job because the office was closed. In New York and San Francisco, by in 2020 before rebounding some in 2021. Remote work is also pitting U.S. states over billions of dollars in taxes from residents who are no longer commuting across state lines. State laws require nonresidents to pay income tax in the state where their office is located.

3. What do workers and bosses want?

Polls of employees who’ve worked remotely during the pandemic show that a majority have no desire to go back to the way things were before. For some, that means full-time remote work. Among their bosses, attitudes vary widely. Some are embracing the possibilities. Offering flexibility could help recruit more diverse job candidates, reduce real estate costs and trim pay for workers who decamp for lower-cost locales. Other executives criticized working from home, or “WFH,” urging a return to office, or “RTO,” as soon as it’s safe. They argue that remote employees aren’t as productive, that corporate cultures will be eroded and that workers’ mental health could suffer. Goldman Sachs Group Inc. Chief Executive Officer David Solomon went as far as calling remote work an that needs to be corrected as quickly as possible. Studies carried out during the pandemic show that working from home can boost productivity, though stories about burnout also abound.

4. How is this likely to shake out?

For many workers, “hybrid” schedules — involving a few days a week in the office and a few at home — will be the new norm. Employers as varied as and say they’ll adopt such approaches. Needing to commute fewer than five days a week could make some people more willing to live farther away from work. Tech firms, in particular, have embraced this as a perk in recruiting.

Some companies have talked about assigned or individual desks and expanding areas that workers can use to collaborate on projects. For some workers, though, their old office may not exist anymore. Target Corp. is giving up about a million square feet of space in downtown Minneapolis, and Boeing Co. may get rid of its south of Seattle. Though leasing activity had started to rebound by mid-2021, overall demand for office space was expected to drop by about 10% to 15% in the U.S. post-pandemic, according to research firm Green Street. 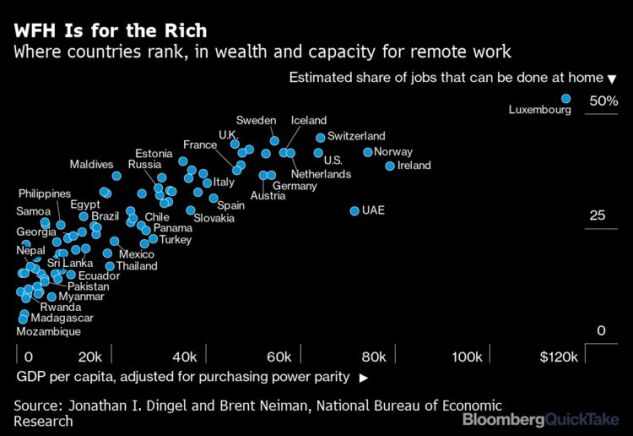 6. How did it play out elsewhere?

In Australia, workers pushed out to semi-rural locations, while in Europe, border closures and travel bans inhibited movement to more scenic spots. One exception was the flight of many eastern Europeans from pricey cities such as London back home to the Czech Republic, Romania and Poland, reversing years of migration in the other direction.

7. Is this the end of urbanization?

Certainly not. Cities are fun, and many people will choose to live in them. There are tons of economic and career benefits of living close to other people, as well. At the same time, many companies are embracing more remote work, suggesting that people are going to have more flexibility in choosing where they want to live.

National Bureau of Economic Research paper on “Why Working from Home Will Stick.”

Research from Cushman & Wakefield on approaches to office work.

A Businessweek cover story on the .

A study from the Federal Reserve Bank of Atlanta on the estimated long-term increase in remote work.

To contact the author of this story:
Noah Buhayar at nbuhayar@bloomberg.net


To contact the editor of this story:
Leah Harrison at lharrison@bloomberg.net

Working from (a Holiday) Home—Tax Challenges
Japan Tax Agency Posts FAQs on Withholding Taxes for Employees Working From Home
You Should Pay Tax for Working From Home, Deutsche Bank Says (1)
United Kingdom Tax Agency Announces Exemption for Work From Home Expenses Due to Coronavirus
© 2021 The Bureau of National Affairs, Inc.
All Rights Reserved