has unveiled a string of emergency measures, including corporate tax cuts and a temporary removal of the budget-deficit cap, as the government steps up efforts to head off an economic crisis caused by the coronavirus.

The government will allocate 405.1 trillion rupiah ($24.8 billion) to fight the pandemic, pushing the budget deficit to 5.07% of gross domestic product this year, President said in a televised speech Tuesday. The corporate tax rate will be lowered to 22% from 25% this year and to 20% in 2022, when some companies will qualify for a rate as low as 17%.

The budget deficit cap of 3% of GDP, introduced in 2003 in the wake of the Asian financial crisis, will be removed immediately. With no debt ceiling in place, the government can significantly ramp up stimulus to support the economy. The government will revert to the 3% cap in 2023.

The measures provide “a foundation for the government, the banking and financial authorities to take extraordinary steps in ensuring public health, saving the national economy and financial system stability,” said Jokowi, as the president is commonly known. 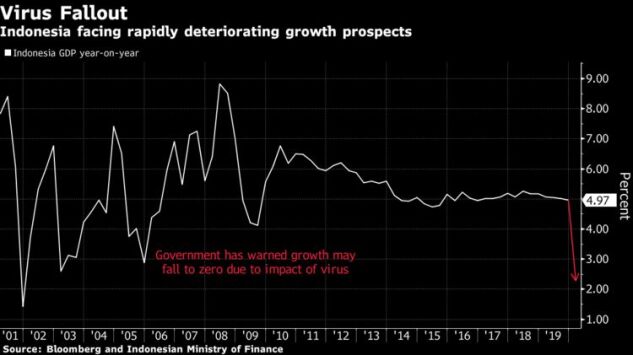 Like many other countries, Indonesia is confronting a crisis on two fronts, with a spike in Covid-19 virus cases stretching the health system to near-breaking point and the economy rapidly deteriorating. The emergency decree underscores the extent of concern for Southeast Asia’s biggest economy, with the government noting that “casualties and material losses are getting bigger.”

There are also worries of widespread job losses in the nation of 270 million people, where about 70 million are in informal employment, as officials warn economic .

“The stimulus must be directed more to the middle- and low-income households to sustain the economy and stop it from slipping deeper,” said , an economist at PT Bank UOB Indonesia. Given the fluidity of developments, the government must be ready to act as necessary, he said.

“Finally we are getting some sizable fiscal support measures after the two packages which we thought were small,” said , an economist at in Singapore. “The front-loading of corporate tax cuts should be welcome, but if it’s now permanent and the fiscal deficit cap is only temporarily raised, then new funding sources might be required later.”

The government will expand social assistance programs to cover a total of 10 million families, and loan repayment terms will be eased for small-business owners and low-income borrowers, Jokowi said.

The president declared a national but rejected calls for a nationwide lockdown, issuing a set of new rules on social distancing. The new measures will mitigate the impact of the outbreak, Jokowi said, adding that police and other law enforcement agencies can take “measurable actions” to enforce large-scale social distancing. 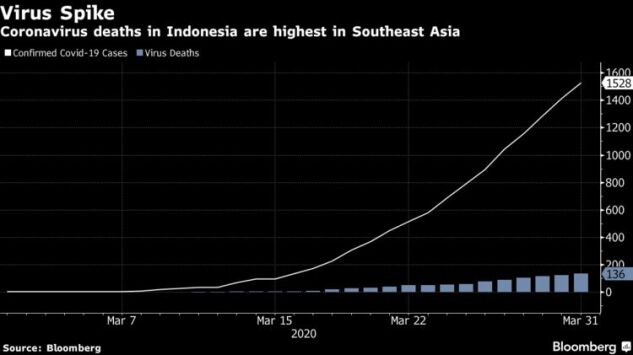 Indonesia also banned foreigners from visiting or transiting through the country, while augmenting screening of citizens returning from overseas. The virus has infected more than 1,500 people in Indonesia and killed 136, the most in Southeast Asia.

The increased fiscal stimulus comes as the central bank continues its currency and bond-market intervention in response to the crisis, after cutting its benchmark interest rate for a second straight month in February. The bank has purchased 172.5 trillion rupiah of government bonds so far this year, Governor said Tuesday, to counter a surge in investor risk aversion sweeping emerging markets.

To contact the editors responsible for this story:
at nseria@bloomberg.net