A monitor displays Wayfair Inc. signage on the floor of the New York Stock Exchange in New York. The defeat in the U.S. Supreme Court of the company's challenge to South Dakota's online sales tax brought about the era of economic nexus for sales taxation.
Photographer: Michael Nagle/Bloomberg

It’s been one year since the Wayfair decision changed the landscape of taxing online retailers. Charles Maniace of Sovos examines how states are looking for the sales threshold sweet spot that brings maximum revenue with minimal administrative burden and what sellers need to do to comply.

Tomorrow marks one year since the U.S. Supreme Court’s ruling in South Dakota v. Wayfair, which sparked a dramatic expansion in the sales tax compliance landscape for ecommerce companies and remote or online sellers. The decision, on June 21, 2018, eradicated the primacy of the “physical presence” standard and made it clear that states have the right to charge taxes on purchases from out-of-state sellers based solely on the scope of their economic presence. As a result, there has been a flurry of activity as states enact and begin to enforce these new sales tax requirements.

In Wayfair, the Supreme Court said the Quill v. North Dakota decision, which held that states can only impose sales tax requirements on sellers physically located within their borders, was wrongly decided and that states were free to require tax collection from remote sellers so long as those requirements did not represent an undue burden on interstate commerce. Apart from detailing how South Dakota’s economic nexus threshold of 200 transactions or $100,000 in sales, when evaluated in light of their relatively simple sales tax rules and their membership in the Streamlined Sales Tax Governing Board, seems not to be unduly burdensome, the Court did not provide much guidance as to what sort of economic connections a seller needs to have with a state to justify a tax collection requirement. Nonetheless, states immediately went to work and began crafting their own rules.

The economic nexus floodgates opened wide in October 2018, when 12 states went live with new rules. And the surge continues. Today, at least 43 states now have economic nexus laws on the books. And five states—Alaska, Delaware, Montana, New Hampshire, and Oregon—do not currently collect any state-level sales tax, so online retailers do not have to worry about them…yet.

The most recent states to begin collecting tax on remote commerce are some of the most challenging:

On top of it all, Arkansas, Pennsylvania, and Virginia all have requirements kicking in as of July 1, 2019.

You may ask, what states don’t have an economic nexus standard on the books? Well, Kansas, Missouri, and Florida don’t have anything official. Louisiana fully plans to announce something and has created a simplified compliance regime for remote sellers, but has yet to pull the trigger and make it mandatory.

Apart from keeping up with the pace of states jumping on the economic nexus bandwagon (which admittedly is close to completion), sellers face a substantial challenge in understanding how to evaluate their obligations on a state-by-state basis. While many states articulated a $100,000 in sales and 200 separate transaction threshold (based on South Dakota’s success before the Court), it’s definitely not universally true.

Several states have foregone the individual transaction test entirely while others have opted for an increased total sales threshold. Further, not every state counts things in the same way. The inclusion (or exclusion) of exempt sales, sales for resale, and marketplace sales vary on a state by state basis. Adding to the confusion, as states begin to gain experience with remote collection, they are refining the rules. For example, Oklahoma recently increased its threshold from $10,000 to $100,000, and in 2020, Georgia will increase its threshold from $100,000 to $250,000. This trend is likely to continue as each state searches for the sweet spot that brings in maximum revenue at a minimal administrative burden.

The Process of Economic Nexus

Once online retailers evaluate their economic nexus footprint and determine where they want and need to collect, the next step is to register in the relevant states. Registration can be a challenging task, as some states ask complex questions about your organizational structure and sometimes request personal information from your officers and directors. Fortunately the Streamlined Sales Tax Central Registration System offers an easy mechanism to register in any one (or more) of its 24 member states.

Assuming you can calculate tax correctly (meaning you know the applicable state, county, city, and district rates that apply at the delivery address and you know any special tax rules that apply to the product and service you are selling) timely and accurate filing and remittance becomes your next challenge. Compliance here is tricky, as sales tax forms can be complex, and in some states, if you are just a minute late, a penalty notice is sure to be issued.

Be on the lookout for any applicable simplifications to which you may be entitled. While by no means universal, a handful of states such as Alabama, Louisiana, and Texas allow remote sellers to avoid much of the complexity associated with local-level compliance.

Sellers also must account for their own success. Although your company may not cross an economic nexus threshold today, you may cross it tomorrow, next month or next year. Once you do, the rules (of course) vary on a state-by-state basis on how soon you need to start collecting.

Simplifying the Complexity of Economic Nexus

Between evolving rules and the shifting tax compliance landscape, managing your own compliance can be a complicated and overwhelming challenge, not only for small sellers, but for remote sellers of any size. Some companies choose to leverage third-party software providers that allow ecommerce retailers to stay ahead of new economic state standards and ensure consistent compliance. Additionally, these solutions can scale as a business expands and readily integrate enterprise resource planning tools and shopping cart vendors.

If planned and executed well, the effective use of tax automation can facilitate tax compliance and meaningfully ease the struggle ecommerce associated with tax compliance today.

There is no denying that economic nexus requirements are here to stay and that rules will develop and evolve over time. Given this dynamic environment, ecommerce companies must stay alert to critical changes impacting their organizations and should consider investing in solutions that allow them to pivot as necessary to maintain compliance amid this shifting landscape. 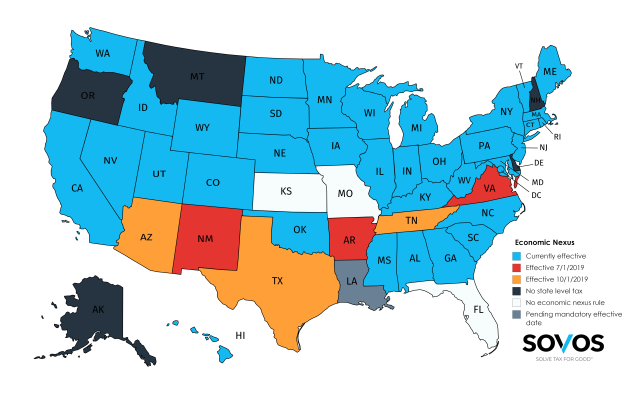 Charles Maniace is vice president of regulatory analysis and design at Sovos, a leading global provider of software that safeguards businesses from the burden and risk of modern tax. An attorney by trade, Chuck leads a team of attorneys and tax professionals responsible for all the tax and regulatory content that keeps Sovos customers continually compliant. Over his 15-year career in tax and regulatory automation, Charles has provided analysis to WSJ, NBC and more.