This is a roundup of Bloomberg Tax’s three days of coverage from the American Bar Association’s spring tax conference in Washington. It is an important time in the tax world, as practitioners and companies watch for high-priority regulations following the 2017 tax law. Our reporters were there to bring you the latest on what to expect in future guidance, where the Internal Revenue Service is adding employees, and how the Treasury Department views global tax policy.

Internal Revenue Service Commissioner Charles Rettig on Saturday laid out several of the agency’s priorities for combating abuse and closing the tax gap—a topic of a recent hearing on Capitol Hill.

Cracking down on the exploitation of tax-advantaged land deals, known as syndicated conservation easements, is a priority, he said. The agency is also closely scrutinizing tax avoidance under “micro-captive” insurance arrangements.

“I see things that are offensive to me,” he said.

Both of these transactions are on the IRS’ most recent Dirty Dozen list of tax scams.

Rettig also said the IRS has many employment tax fraud cases it is considering. These are cases in which a business withholds taxes from its employees but intentionally fails to pay them to the IRS.

“Don’t come in with a story unless you believe the story,” he said.

Tax Stats: Rettig highlighted the agency’s work implementing the 2017 tax overhaul. The agency published at least 94 formal guidance items, such as regulations, as of March, he said.

The IRS worked at record speed during this year’s filing season, despite the 35-day government shutdown that ended right before, Rettig said.

On Jan. 28, the day the season opened, the IRS—without any errors—processed 1.9 million returns in an hour, 536 returns in a second, he said.

IT Hiring Issues: Rettig spoke at the conference Thursday as well. In that address, he said the IRS’ lengthy onboarding process for new employees is deterring talent from joining the agency’s IT team.

Rettig said he wants to streamline the hiring process for those workers. Currently it can take about eight or nine months to bring on a new worker.

Enforcement Hires: The agency could be adding as many as 400 special agents, Michael Batdorf, deputy director of operations for Criminal Investigation division said late Friday. Allyson Versprille has more. 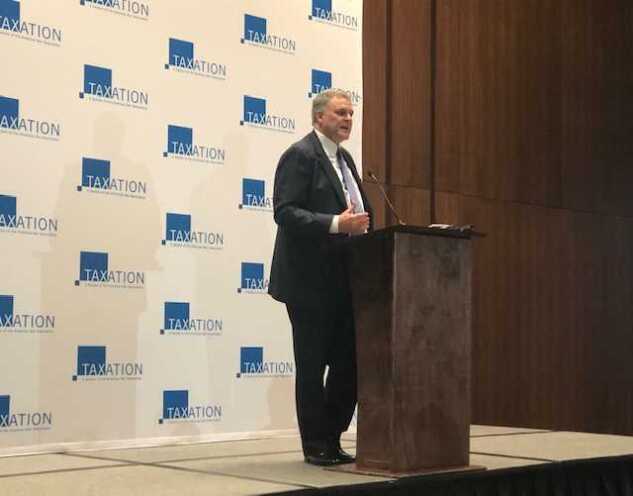 Companies paying a tax on global intangible low-taxed income (GILTI) for overseas earnings even if their offshore tax rate is well over 13 percent could see some good news in forthcoming final rules.

The exception is among the requests companies have made since proposed rules were released in the fall. Final rules are expected next month.

Desmond Down on Technical Corrections

The IRS’ top attorney isn’t counting on Congress to pass technical fixes to the 2017 tax law.

Lawmakers have identified dozens of errors and omissions in that law, such as the “retail glitch” that prevents retailers and restaurants from immediately writing off the costs of interior improvements.

Desmond said the political climate is much different than it was after the 2004 tax cuts were enacted. At that time, Treasury quickly began working with lawmakers and the Joint Committee on Taxation to make technical fixes.

The U.S. is actively trying to stop countries, like France, from taking solo action on new taxes aimed at major digital companies like Facebook Inc. and Alphabet Inc.'s Google.

“The U.S. is clear on its opposition to digital services tax and we’ll do our best to make that view known around the world,” Brian Jenn, deputy international tax counsel at the Treasury Department, said at the conference Friday.

The Organization for Economic Cooperation and Development is trying to find global agreement on how to tax the companies. House and Senate lawmakers have applauded the OECD, and called on other countries to abandon any unilateral efforts.

Treasury is taking another look at how the 2017 tax overhaul’s debt interest deduction limit should work.

A second batch of proposed rules under Section 163(j) should include tax treatment of debt-financed distributions, among other issues, according to Bryan Rimmke, an attorney-adviser in Treasury’s Office of Tax Legislative Counsel. Treasury is also reconsidering its definition of interest subject to the deduction limit, Rimmke said Friday.

“I think it’s fairly clear a policy decision was made to use a relatively broad definition of interest,” Rimmke said. “We are looking at whether it’s appropriate to tailor the definition of it.”