This is part two of a deep dive into the problems plaguing the Internal Revenue Service. We asked current and former government officials, agency watchdogs, and tax professionals to break down how the agency landed in such a dire situation and offer their plan for how the agency can be fixed.

IRS Commissioner got a wake-up call about the state of the IRS workforce at an unlikely place: a Waffle House he stopped in during a visit to see his son at Fort Benning, Ga.

Rettig noticed a sign advertising positions starting at $15 an hour. The reality dawned on him that the diner chain pays its entry-level staff more than the IRS was offering some of its front-line workers very recently.

“Do you know that prior to the executive order a few months back we were paying $14.57 for the privilege to come on board and serve the country?” Rettig said during remarks at a March tax conference.

That Waffle House visit highlights a major challenge the IRS has in recruiting enough entry-level workers to perform important jobs like handling the more than a million paper documents the IRS receives each week or staffing the agency’s help lines. Like many employers during “The Great Resignation,” staff retention is also a challenge for the IRS: In both fiscal 2020 and fiscal 2021, the total number of retirements and separations from the IRS slightly exceeded the number of external hires, according to an annual report from National Taxpayer Advocate Erin Collins.

Rettig came to the agency in 2018 with decades of experience as a Beverly Hills-based tax attorney, billing himself during a Senate confirmation hearing as someone intimately familiar with the difficulties taxpayers face in dealing with the agency. The next year, Congress passed a broad IRS reform law that called for the agency to improve its customer service.

And yet, the IRS is still struggling. The last three filing seasons were marred by a backlog of unprocessed paper returns, confusing tax code changes, and many times more phone calls to IRS help lines than the agency can handle.

Paying workers more isn’t a straightforward answer to the agency’s workforce problems, given the limitations of the federal government’s standard salary scale. But representatives of IRS employees and current and former IRS watchdogs say the agency should work with the federal government’s Office of Personnel Management to raise pay, lean on the government’s generous benefits package to attract new workers, and improve the workplace culture to stem the tide of employees heading for the exits.

Read more: Tony Reardon, president of the National Treasury Employees Union, shares his thoughts on how to fix the IRS’s recruiting and retention issues.

While the agency still has fewer workers than it did 10 years ago, the Biden administration wants to give the IRS an additional $80 billion over a decade. The Treasury Department estimates that money would allow the agency to add nearly 87,000 auditors and other employees, which would more than double the current workforce of roughly 75,000. 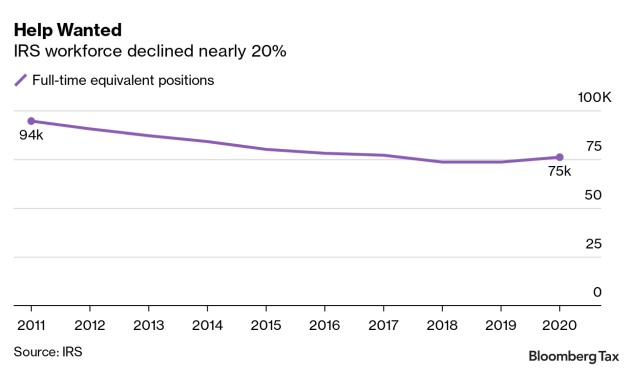 While that funding is tied up in a broad economic package that stalled in the Senate, the IRS is already expanding its workforce after a series of smaller funding increases, including a $675 million boost in the fiscal 2022 omnibus.

The Office of Personnel Management recently authorized the IRS to use an expedited hiring process known as direct-hire authority to add 10,000 entry-level workers to help tackle a backlog of paper tax returns that amassed at processing centers around the country. The IRS has already made more than 2,500 job offers from in-person and virtual job fairs, according to Carrie Holland, deputy human capital officer at the IRS.

A low unemployment rate—the most recent jobs report put it at 3.6%—makes for a more competitive labor market, especially for positions at the lower end of the federal pay scale.

In Ogden, Utah, home to a major IRS processing center, the jobless rate is even lower than the national average. The expedited hiring process has helped with recruiting by cutting application-wait times to mere minutes during in-person recruiting events, said Brett Bemenderfer, senior program manager in submission processing at the Ogden facility.

But the hot local job market poses a major obstacle to filling labor-intensive roles at the IRS, Bemenderfer said.

An executive order prompting an increase in the minimum wage for federal workers to $15 an hour took effect in January, a boost that OPM estimated would raise pay for about 1,200 Treasury Department employees. But the effective pay for many at the agency is lower than that because they have to make a mandatory retirement contribution, according to Chad Hooper, executive director of the Professional Managers Association, an association that represents IRS managers.

“Who the heck would want to do this job for that little money?” Hooper said.

The IRS is taking steps to offering more money, including a $1,000 incentive available for people hired through direct-hiring authority if they agree to work at the IRS for at least a year. It is also offering current employees referral bonuses.

“We’re trying to think like the private sector,” Rettig said in a brief interview after an April Senate Finance Committee hearing.

One of the top recommendations made by those familiar with IRS workforce issues is to get more roles on a special salary scale that is higher than the regular range of federal government pay.

The IRS already has the ability to offer higher pay for key information technology positions, something Congress recently renewed in the Taxpayer First Act, the agency overhaul law enacted in 2019. A similar approach could help with other hard-to-fill jobs.

Hooper said the IRS should have discussions with OPM about boosting pay for entry-level workers so the agency is in line with comparable jobs at major retailers like and , while Collins recommended that the IRS ask OPM to establish special higher pay rates to make it easier to recruit and retain well-qualified employees.

Collins also suggested the IRS should ask Congress to add it to a list of agencies—the Securities and Exchange Commission and the Consumer Financial Protection Bureau being two—that can have certain positions outside of the regular government pay scale.

“The IRS’s unique role in collecting federal revenue would make it a perfect candidate to have certain positions placed on the special pay scale, making it a more attractive employer for certain highly technical positions that need specific experience or qualifications,” she wrote.

In an interview with Bloomberg Tax, Holland said the IRS is having discussions with the Treasury Department about opportunities to use a higher pay scale for certain roles.

The IRS may be in the same range as Waffle House and other service industry jobs when it comes to entry-level pay, but federal government work comes with some additional perks. Former National Taxpayer Advocate Nina Olson said the IRS could do a better job selling potential employees on its robust benefits package.

Olson, who now serves as executive director of the Center for Taxpayer Rights, said while “people want hard cash,” benefits such as health care, family leave, and sick leave are also important.

The IRS has been taking some steps to market non-wage aspects of their jobs.

Holland said the IRS points out that the federal government is a stable employer that offers good benefits, and that the agency offers both year-round and seasonal jobs, with daytime and nighttime shifts. The IRS also is working to implement tuition assistance and student-loan repayment programs.

“We look at this more as a career than a job,” Holland said.

But getting IRS employees to stay at the agency long term is a challenge.

“The challenge that we hear as leaders in centers, as we get these folks on-boarded, is making sure that we retain them moving forward,” Bemenderfer said. “It’s one thing to get them through the door, it’s another thing to retain them and keep them here.”

In addition to more pay, the union that represents IRS employees suggests better training could help prepare entry-level workers for the challenges they will face and open up future, better-paying career opportunities.

The IRS already offers substantial amounts of training for employees—providing between 3.6 million and 4.6 million hours each year from fiscal 2015 to 2020, according to Collins’ report. Holland said the IRS is working to improve its training by moving toward an “IRS University” concept, which will include both in-person and online training.

But Doreen Greenwald, national executive vice president of the National Treasury Employees Union, said current training for new employees can be inadequate. Much of it is virtual or computer-based, which can be challenging for roles focused on customer service, said Greenwald, who spent more than 20 years working as an IRS revenue officer.

“While you can read a lot of things on a screen, that doesn’t teach you how to interact with people, and some of the gaps there cause people concern,” she said. “And if they’re not comfortable doing the job, they leave.”