Republicans universally rejected a $3 trillion stimulus measure drafted by House Democrats to bolster the U.S. economy, but the draft plan has the seeds for an eventual, smaller compromise.

With Speaker pushing the House toward a Friday vote on the Democratic package, a Senate Republican aide said that Majority Leader doesn’t plan to move on any GOP alternative until June at the earliest. 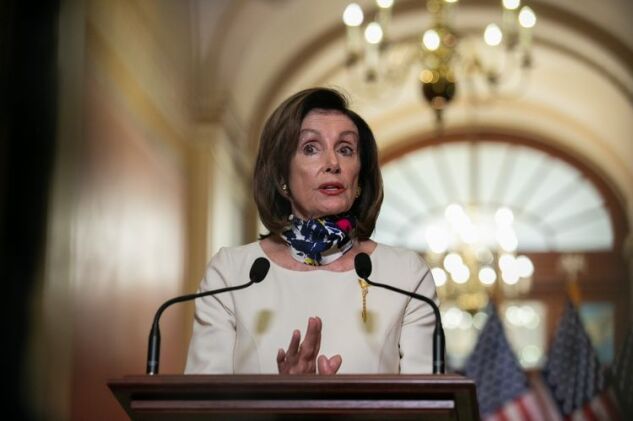 Continuing economic misery and a still rising death toll, though, would put pressure on both sides to reach one last deal before campaigns for the November elections are fully engaged. The framework for a compromise -- probably still weeks away -- likely will be built on state and local government aid, expanded tax breaks and legal protections for businesses and assistance for unemployed workers.

“Ultimately I think we will be able to work this out,” House Democratic Caucus Chairman said on a BakerHostetler webinar Wednesday. “Of course Mitch McConnell, who is a master negotiator, will try to extract a price.”

There are several pressure points looming that will increase the stakes, including expiring pandemic unemployment insurance and Paycheck Protection Program provisions at the end of July, and the Sept. 30 ending of grant funding for airlines, as well as the fiscal year.

Republicans are counting on the lifting of lockdowns in many states along with the previous stimulus money still flowing out to juice the economy enough that another big spending package won’t be necessary. That aligns them with President , who has said he’s in “no rush” for another stimulus package.

Treasury Secretary , who was a linchpin in the negotiations that produced the previous stimulus bills, dismissed the Democratic bill and said both sides should spend the next 30 days assessing how well those earlier efforts are working.

”What Speaker Pelosi is moving forward with is clearly a very partisan bill. This is not in the spirit that’s been bipartisan, I can’t see that moving forward in its current framework, in any event,” Mnuchin said on Fox News late Thursday. “If we need to spend more money down the road, we’ll come back and do that.”

“Additional fiscal support could be costly, but worth it if it helps avoid long-term economic damage and leaves us with a stronger recovery,” he said in remarks to a virtual event hosted by the Peterson Institute for International Economics.

The House bill, which leaders plan to vote on Friday despite a rebellion by some more liberal members who want more spending, would funnel about $1 trillion to cash-strapped state and local governments, provide individuals with a new round of stimulus checks and extend expanded unemployment insurance through January.

One area potentially most ripe for compromise is aid to state and local governments. The unprecedented speed of the nation’s economic contraction is hitting Republican and Democratic states equally. Virtually every major source of revenue is plunging, pushing states toward what could be the worst fiscal crisis in decades. Some Republican-heavy states, like Texas and Alaska, are facing an additional hit from the drop in oil prices.

McConnell’s home state of Kentucky has been hard hit by job losses. In Ohio, Republican Governor already announced $775 million in cuts from the state’s budget for the year ending in June.

Louisiana Senator is the lead Republican on a bill with New Jersey Democrat to send states another $500 billion. Menendez has said he expects additional Republican sponsors soon, and of Maine and of Ohio have also publicly called for additional aid to prevent furloughs of state and local employees.

McConnell and other Republicans have been insisting that any state aid can’t be used by legislatures to plug deficits in pension plans for public employees. The rhetoric is aimed at Democratic states such as Illinois where generous union-negotiated pension plans are facing deep shortfalls, but Kentucky has one of the worst funded pension systems in the nation.

Pelosi has said the aid should be focused on virus-related expenses, a potential opening for compromise. Some GOP lawmakers, meanwhile, are open to giving states more latitude. Louisiana Republican Senator , who was among a group of GOP lawmakers who met with Trump Tuesday to discuss aid to states, has introduced legislation to give governors and legislatures increased flexibility in how they spend aid that’s already appropriated.

, a former top Republican aide on the Senate Budget Committee, said McConnell will eventually agree to allow a smaller package to pass.

“If for no other reason than the May and June unemployment rates will remain very high and the termination of the $600+ to unemployment insurance,” said Hoagland, now at the Bipartisan Policy Center. “I believe he will relinquish on state aid but with strings attached on liability.”

McConnell has insisted that any new package have liability shields for businesses to prevent them from being sued by employees or customers over coronavirus infections.

Although Democrats long have resisted any steps to limit the ability of groups and individuals to file lawsuits, Pelosi has indicated she’s open to the idea of protecting businesses that follow government regulations and guidelines. Many moderates House Democrats also have expressed support for some liability protections for businesses.

“We don’t want to create in any disincentives, to make sure our businesses are being as safe as possible, but we also have to recognize, similar to what happened in 9/11, that this pandemic is an extraordinary event that may require standing up a different system to both provide fair, just compensation to those who have been impacted but perhaps be open to doing it in an different way,” Jeffries said Tuesday.

The Senate Judiciary Committee held a hearing on the subject this week and could announce a vote on a measure shortly.

Another area with bipartisan backing is to boost a tax credit that gives employers tax breaks for keeping workers on the payroll. A smaller version was included in the last virus relief bill and the expanded version would give employers a credit worth up to $12,000 per employee per quarter, an increase of $5,000 per worker for the remainder of the year. The credit would be a more targeted and less costly way to help workers than Trump’s idea to cut payroll taxes, according to proponents.

“The president is very receptive to these ideas of payroll tax relief,” Representative , a New York Republican, said on a call with reporters Tuesday. “This is something that he is very interested in pursuing and we intend to pursue it with him.”

Representative , a moderate Florida Democrat, said the combination of the new and old provision would cost about $212 billion and help about 59 million workers.

The larger House “bill is a negotiating starting point,” Murphy said. The bills that have “bipartisan support” and direct affect the economic crisis “are the things eventually make it into law.”

Pelosi and McConnell both are confronting divisions within their parties about the next steps to deal with a historic downturn in the U.S. economy caused by the coronavirus pandemic.

Many Republicans say they want to wait and see who the existing stimulus measures play out before committing to more.

“It’s difficult to understand how Democrats can call for an additional $3 trillion – all money borrowed on the backs of younger workers and our children and grandchildren – when they haven’t even seen what existing funds have been used for, or whether they’ve been used at all,” said South Dakota Senator , the second-ranking Republican in the chamber.

But others are questioning whether additional aid is needed at all.

“There is no more discussion of need for more aid when many states are not allocating that aid as Congress intended,” , the top Republican on the House Ways and Means Committee, told reporters Wednesday. “My sense is that the $150 billion in direct aid will not only cover the coronavirus costs, it will have a great deal of dollars left over.”

Before any eventual negotiations, Pelosi will first have to get her bill, dubbed The Heroes Act, out of the House.

To win support of her caucus, Pelosi also included a long list of other priorities that have come under immediate attacks from Republicans, including bailouts for the Postal Service and multi-employer pensions, tax breaks for wealthy homeowners in Democratic-controlled states, expanded access to Obamacare and a requirement to hold the November elections by mail.

Even still, Pelosi is facing a potential revolt from the liberal Congressional Progressive Caucus whose leaders say the bill does not provide enough help to the economy.