German Chancellor called for a Europe-wide economic stimulus program to be financed by the European Union’s budget, making a national appeal that helping partners would be good for Germany.

“A European growth program could support an upswing over the next two years, and we’ll work for that,” Merkel said in a speech to the lower house of parliament in Berlin on Thursday. “We want to act quickly in Europe, and we of course need instruments to be able to quickly deal with the effects of the crisis in all member states.”

She urged German lawmakers to move fast to make a planned 500 billion euros ($540 billion) in EU spending available as soon as June 1. 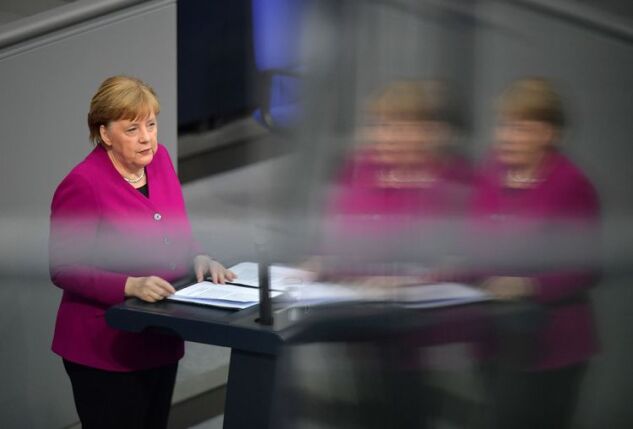 The chancellor spoke ahead of a video conference with her EU counterparts to discuss the next steps in tackling the virus crisis. The pandemic has battered the region’s economies and plunged the world’s largest trading bloc into the worst recession in living memory.

Merkel said joint-debt issuance -- sought by France, Italy and Spain -- wasn’t a viable option to quickly react to the crisis, because it would require treaty changes to transfer some national budget authority to the EU.

Even if the political will is there, “that would be a time-consuming and difficult process and wouldn’t directly help anyone in the current situation,” she said.

The European Commission has proposed a 2 trillion-euro as it seeks to overcome divisions between members over the response. The EU expects output to contract by as much as 10% this year, according to an official.

“We should be prepared, in the spirit of solidarity and over a limited period of time, to contribute more to the European budget,” she said. “It’s about helping quickly and swiftly making instruments available to ease the impact of the crisis.”

To shore up Germany’s domestic economy, Merkel’s coalition agreed on a 10 billion-euro ($10.8 billion) package of further measures to limit the damage. After almost eight hours of wrangling that started Wednesday evening, party leaders settled differences over how to tackle the next stage of the fallout.

The government will temporarily reduce value-added tax for restaurants and increase the amount of money paid as state wage support as part of a seven-point plan to fine-tune the government’s crisis response.

Spending to shore up Europe’s largest economy will push Germany’s public-sector deficit to of GDP this year, according to the government’s latest fiscal report for the EU. Almost a third of all German companies have requested state wage support.

An estimate of private-sector activity in the euro area plunged to just 13.5 from 29.7 in March, IHS Markit said Thursday. The drop was far sharper than economists had anticipated and marks the lowest reading for the Purchasing Managers’ Index since it began more than two decades ago.

Germany also suffered a , with its reading of the monthly Purchasing Managers’ Index plunging to the lowest on record.

Merkel started her speech with an emotional appeal, highlighting her concerns about elderly people being unable to see grandchildren and other sacrifices made by people to contain the spread of the disease. She called on Germans to stay the course, saying the progress made so far is “fragile.”

The difficulties of controlling the virus were evident in Germany’s . The number of new infections rose for the second time in five days, according to data from Johns Hopkins University. Germany now has more than 150,000 cases, the fifth-most worldwide.

“We are not at the end of the pandemic but at the beginning,” Merkel said, adding that only a vaccine can truly elimate the risk posed by the disease. “The situation is deceptive, and we are far from out of the woods.”

(Updates with additional comments from Merkel throughout)

To contact the reporter on this story:
in Berlin at bjennen1@bloomberg.net