This is part three of a deep dive into the problems plaguing the Internal Revenue Service. We asked current and former government officials, agency watchdogs, and tax professionals to break down how the agency landed in such a dire situation and offer their plan for how the agency can be fixed.

If you’re stuck on hold for hours on the IRS’s customer help line, you’re probably not just behind other people with tax questions.

The queues are also jammed up with parents confused about new pandemic benefits, people missing stimulus checks, and sometimes even applicants for disaster relief from the Federal Emergency Management Agency.

The Covid-19 pandemic magnified longstanding structural deficiencies that hamper the IRS’s ability to fulfill its core mission of collecting revenue and enforcing tax laws—problems that money alone can’t solve. It also accelerated the agency’s transformation from being just a tax collector into a major government distributor of social services aid, stretching resources even thinner.

“Something was going to suffer. And now we see what it is,” said Carlos Lopez, founder of the Latino Tax Professionals Association, who recalled waiting on hold 2 1/2 hours to talk to someone about a tax debt of almost $300,000 incurred by a client’s widowed spouse.

IRS Commissioner Chuck Rettig came to the agency in 2018 with decades of experience as a Beverly Hills-based tax attorney, billing himself during a Senate confirmation hearing as someone intimately familiar with the difficulties taxpayers face. The next year, Congress passed a broad reform law that called for the IRS to improve its customer service.

And yet, the IRS is still struggling. The last three filing seasons were marred by a backlog of unprocessed returns, confusing tax code changes, and many times more phone calls to IRS help lines than the agency can handle.

Read more: Edward S. Karl, vice president of taxation of the American Institute of CPAs, offers his thoughts on the antiquated tax administration system and need for IRS modernization.

Congress is well aware of the IRS’s troubles. The Taxpayer First Act, a broad agency overhaul law passed in the summer of 2019, required the IRS to explore reorganizing and develop both a comprehensive customer service strategy and a multiyear strategic IT plan.

But when the pandemic hit in 2020, Congress quickly looked to the IRS as one of the agencies to lead the federal government’s economic response. A series of pandemic relief bills directed the IRS to issue three rounds of stimulus checks, pay out the child tax credit on a monthly basis, and manage various new and expanded business tax perks.

All those additional responsibilities piled on top of the core work that was already overwhelming the IRS. The number of taxpayers grew about 19% since 2010, while the number of personnel at the agency shrunk about 17% over the same period, according to a January report from National Taxpayer Advocate Erin Collins.

“They were asked a lot in the last two years,” Collins said in an interview. “But the challenge is, some of our core functions are paying the price.”

The IRS quickly moved resources around to administer stimulus checks and advance child tax credit payments, Collins said. That pivot contributed to a buildup of the agency’s return backlog.

On the ground at the agency’s Ogden, Utah paper-return processing center, every new responsibility placed on the agency directly impacts the workers in charge of processing paper returns. Brett Bemenderfer, senior program manager in submission processing at the Ogden facility, said the additional work adds manual processing burdens on the employees he manages.

Advance child tax credit payments, for example, required taxpayers to report how much money they received from the agency on their returns. Adding that information to a paper return—which already takes a month to process under perfect circumstances—means employees have to manually input more data into IRS systems and increases the chance that the return will be flagged for the time-consuming error resolution process.

“We continue to be asked to do more and more with less and less,” Bemenderfer said. “And with every new step in that process with added, due to late legislation or due to additional responsibilities put on the agency shoulders, that each additional step that’s implemented, adds time to the time it takes to process that return, it adds additional manual processes or burdens on the employees.”

The agency saw an influx in calls due to the new pandemic relief programs and shifted its call-center employees to handle non-tax filing questions. Calls to the IRS spiked after the enactment of the March 2021 coronavirus relief law, which authorized a third stimulus check, expanded the child tax credit, and retroactively made some unemployment benefits tax-free. 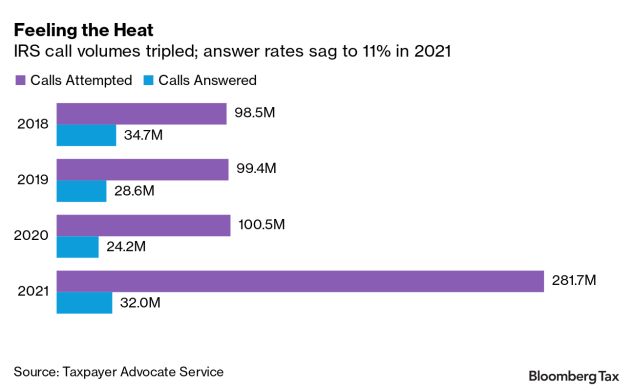 Former Taxpayer Advocate Nina Olson says that is one solution under the IRS’s control: it could simply stop answering those calls.

If that wasn’t enough, front-line customer service representatives have other responsibilities as time allows, including responding to taxpayer correspondence, processing amended returns, and working paper cases.

A “vicious cycle” occurs for those employees: As the number of calls increase, workers can’t tackle the backlog; but because the backlog keeps growing, call volumes increase as well, Collins said in her report.

Once Congress establishes a lever to deliver aid or raise revenue, it tends to keep pulling it.

The IRS used to only collect taxes. But in 1975, Congress established the earned income tax credit (EITC) to deliver assistance to low-income people through the tax code, a policy that was supposed to be temporary. Fast-forward 45 years, the tax code and the agency administering it distributed more than $270 billion in direct checks in seven months, according to a 2020 National Taxpayer Advocate report.

It’s unlikely Congress will stop using the tax code as a primary mechanism of delivering aid. That’s why the IRS should embrace its new role as the administer of social programs, Collins said.

“They should consider it as part of the reorganization having a function specifically working on those social programs, whether that’s EITC, the child tax credit, or other social programs that Congress requests the IRS to work on,” Collins said.

One idea that’s been getting traction, according to former IRS Chief Counsel Michael Desmond: Split the IRS into two major subdivisions—one to collect taxes, the other to distribute aid.

That way, each division could better focus while sharing taxpayer data within the same agency, said Desmond, now a partner at Gibson, Dunn & Crutcher LLP.

“There could be some creative way of doing that—that kind of keeps it under the same bureau, but really puts the functions in different buckets,” he said.

The main advantage of splitting the IRS in two is messaging. A reorganization could help convince Congress to provide the agency with more money for benefits administration, Desmond said.

“The IRS for decades has been known as the collection agency. Who wants to invite the commissioner to dinner?” Desmond said. There is a “lack of understanding that this agency is actually doing something that benefits you enormously.”