New York City residents who fled the city as the coronavirus spread through the U.S. may avoid paying local income tax this year if they don't return as things reopen.
Photographer: Angus Mordant/Bloomberg

One night in March, Laura DiMeo fled New York City for an Airbnb house in Cape Cod, where she and her daughter planned to wait out the Covid-19 lockdown. They’re still there, tethered by the internet to work and school back home, and unsure where they’ll settle next.

“We don’t know which way to go,” DiMeo said. “We’re trying to figure out what to do and what our proximity to New York needs to be.” 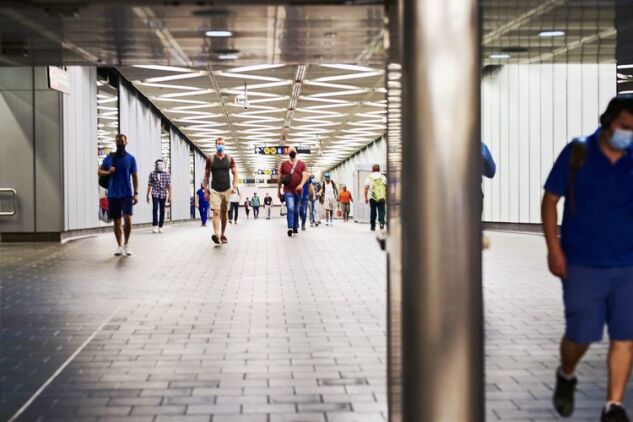 It’s a potentially life-changing decision that thousands of other New Yorkers in temporary exile also face. And they’re running out of time to make it.

While the city slowly , uncertainty reigns for families that decamped to suburban spreads with lawns and extra space for Zoom school rooms and offices. They now have to weigh whether to return to their apartments before the next academic year starts in September, or make the move-out permanent. They’re not getting much clarity to help with that tough choice.

Manhattan’s office towers are allowing a partial return of workers this week, yet many firms, including some of , have set no deadline for when -- -- all employees must come back. City schools, both private and public, are plotting how they may open safely, suggesting a blend of in-person and online learning that make picking a place to call home even more difficult.

On Wednesday, New York, New Jersey and Connecticut said visitors from states that are virus hot spots would have to quarantine for 14 days, potentially complicating returns to the city.

Meanwhile, competition to buy homes in the city’s commuter suburbs is , turning off fence-sitters who can’t stomach a bidding war. Others are conflicted about putting down roots in a far-off location, when they may have to go back to their Manhattan offices in just few months.

“It will be a game-time decision in September,” said Gunjan Prakash, a Greenwich Village mom of 9-year-old twins in public school.

The family -- including her husband, a lawyer whose office is in Midtown -- spent March and April in Vermont then moved to a lakeside cottage in Connecticut. Their lease in Manhattan ends this month, and where they’ll live next is a riddle.

“If school opens and my husband works in the city, we also have to consider that,” said Prakash, who can run her website, Families Love Travel, from anywhere. “If his work is opening, and the school is Zoom, maybe we rent a house near the city in Westchester or Greenwich.”

Where the undecideds go has big implications for New York at a time when it’s already facing a $1.6 billion deficit next year. That hole could widen to almost $6 billion in 2022, based on variables such as personal income tax and other revenue streams that rely on people staying put, said George Sweeting, deputy director of the city Independent Budget Office.

Workers who prove they’ve lived outside the city for at least 183 days can avoid local income tax, a significant concern this year, Sweeting said. About 162,000 city taxpayers make more than $250,000. If just 5% of them fled the city permanently, they would take at least $360 million in income tax revenue with them.

How the city bounces back in the next two or three years “will determine whether this exodus is permanent or it’s just a blip,” said , president of the Partnership for New York City, a civic group of corporate executives. The answer won’t become clear until the city begins to fully reopen its offices, restaurants, theaters, stadiums and retail spaces, she said.

The uncertainty is fueling a boom in suburban rental houses, as New Yorkers hedge against what may be an unpredictable school year, said Sheila Stoltz, a broker in Bronxville with Houlihan Lawrence.

One of her listings drew 50 inquiries, some from Manhattanites seeking access to Westchester County’s public schools. New York City families don’t want to pay hefty private-school tuition for a year that might end up being online, and if school is on Zoom, they want it to be in a house, not an apartment, Stoltz said.

“They have the sense that things may not be back to normal by September,” she said.

For Roxanne Russell, that’s actually the hope. Her ninth-grade son, who loved his new school before the pandemic, adjusted well to online classes this spring, which he attended through Zoom in his grandparents’ Atlanta home.

Russell wants his public school, in Morningside Heights, to offer students the option of staying fully remote through 2021. Without a Covid vaccine, she’s not yet comfortable with in-person learning. And going remote would give her family a chance to travel the country and live in a new city each month, she said.

“The school decision -- that’s the main decision, and then the waterfall of decisions comes after that,” said Russell, whose job, as director of online education at Columbia University’s Mailman School of Public Health, can be done remotely at least through January.

For DiMeo and her middle-school daughter, three months of online learning was plenty. She could be tempted to go back to Manhattan should classes start as usual in the fall. Yet after sampling life in a house, she isn’t so eager to return to the Financial District apartment she’s had since 2004.

The time spent away also has DiMeo, a app designer for a fintech firm, reassessing whether she wants to resume the “contact sport” of being a New Yorker, in a city contending with both a public health and a budget crisis.

“New York is going to pull through. It’s going to make it, it always does,” said DiMeo, a Boston-area native whose years in Manhattan included the 2003 blackout and Superstorm Sandy. “But a lot of us have been through other rodeos -- and do I have the energy for this one?”

To contact the editors responsible for this story:
at cgiammona@bloomberg.net

Henry Goldman
Bloomberg News
N.Y. Tax Receipts Down Nearly 20% in May Compared with 2019
NYC Hotel Tax Revenue Projected to Fall 80% Due to Shutdown
© 2021 The Bureau of National Affairs, Inc.
All Rights Reserved