Almost every year since 1992, the governor of New York has granted a request by New York City’s mayor and City Council to shave property tax bills for a sliver of wealthy residents.

The targeted relief has meant residents of affluent, fast appreciating homes in neighborhoods like Park Slope, Williamsburg, and Sunset Park have been the greatest beneficiaries of the current tax system.

That springtime tax break for the rich is still on track—it’s even baked into Mayor Bill de Blasio’s budget—while promises of help for property owners on the other side of the spectrum has fizzled. The best opportunity in decades to reform the city’s property tax system was sidelined a year ago by the pandemic and has gotten overtaken by other priorities and politics. De Blasio recently promised to come up with a plan before he leaves City Hall on Dec. 31, but there is no obligation for his successor to follow through nor has it been a major mayoral campaign issue.

Though many politicians have decried the city’s property tax set-up as unfair, resistance to change has been fierce for years.

“The fear is that it would result in substantial increases to one-, two-, three-family homeowners, and it would result in a significant increase in their taxes and elected officials seem averse to actually doing that,” said Martha Stark, a former finance commissioner and director of policy for the Tax Equity Now New York coalition, which filed a lawsuit against the city’s tax system in 2017. “That’s what drives: ‘Let’s kick it down the road and have someone else address.’” 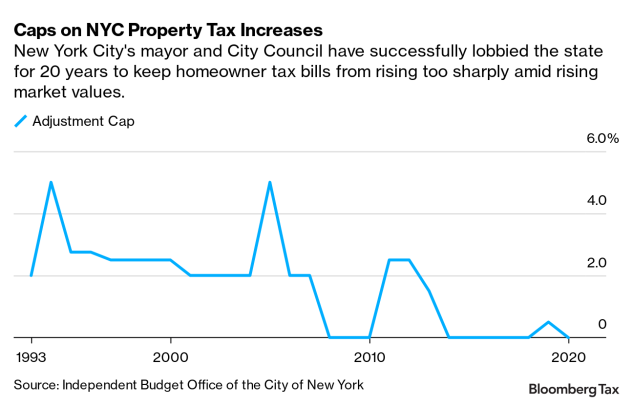 The city’s heavy reliance on property tax revenue and the politically difficult task of rebalancing a tax burden has kept the status quo in place for four decades: a system where the shared burden of the city’s property tax revenue is weighted against minorities and poorer families living in similarly valued homes in East New York, Brownsville or Canarsie as well as low- to moderate income renters in high-rise buildings.

“It’s a zero-sum game,” said George Sweeting, deputy director for the New York City Independent Budget Office. “Someone has to win and someone has to lose. So that tension makes it hard to get political people wading in too far.”

In January, De Blasio recommitted to his 2013 campaign vow to fix the city’s property tax reform system, after the Covid-19 crisis interrupted efforts last year. He told lawmakers that the reform commission would finalize a set of recommendations and resume public hearings.

The first hearing to air recommendations on March 12, 2020, in Staten Island was abruptly canceled when pandemic-triggered shutdowns started. Nothing has been rescheduled yet.

But the pandemic isn’t the only factor to blame. While the state of emergency halted required public feedback on the commission’s initial proposal, only a few weeks earlier a mid-level New York state appeals court dismissed a 2017 TENNY lawsuit over questions of fairness and equity. The threat of a potentially successful lawsuit hanging over the city had been erased. What’s more, the chief architect of the reform effort, Vicky Been, was no longer at the helm co-chairing the city’s advisory committee with Marc Shaw. She was promoted by de Blasio to be his deputy mayor for housing and economic development about a year into the job.

A representative from de Blasio’s office did not respond to a request for comment.

“De Blasio’s commission can issue a final report before his term ends, but no one is going to move on this issue in the next six months,” said Ana Champeny, director of city studies for the Citizens Budget Commission.

After months of delays, the tax reform commission in January 2020, offered a framework for a new system, the first step in a long process that would ultimately require approval in Albany. Adding to the complexity, the mayor also called for any city reform effort to be revenue neutral to avoid disrupting the city’s budget.

“The commission is operating under a revenue neutral mandate, so you have to bring in the same amount of money with today’s system,” said Sweeting.

Alignment among political stakeholders—the governor, Legislature and city and state officials, many of whom are running for re-election—has also made reaching a consensus challenging.

Legislative leaders have other priorities this year, namely building on the state’s economic recovery from the yearlong health crisis and juggling an impeachment inquiry against Gov. Andrew Cuomo over allegations of misconduct. Typically, top Senate and Assembly leaders would consider such legislation after the budget closes on April 1, but policy aides say that is an unlikely.

“I don’t think it’s going to come up this year,” said Phil Giltner, a policy director for Democratic state Sen. Brian Benjamin, who chairs the Budget and Revenue Committee. “I think this year the key story really is Covid, Covid, Covid.”

It may be a far-off issue for the city’s next leader, too. Thus far, the field of Democratic mayoral candidates have only given a nod to property tax inequities without rolling out any comprehensive reform plans. “Given the winners and losers situation, it would be tough for a new mayor to take this on during the first days of a new administration,” said Champeny.

Stalled property reform efforts date back to former Mayor David Dickens, who served one three-year term between 1990 and 1993. Intrinsic equity issues that inevitably results in some taxpayers paying more while others pay less has made the possibility of reform politically fraught.

“Nobody wants to increase anybody’s property taxes,” said Giltner. “There is an allergy of anybody wanting to be the person in front and says, ‘I’m going to raise the property tax on small property owners.’ That’s just politically, a very, very, very difficult thing for anybody to do.”

Unlike other major cities, New York’s property tax system is divided over a four-class system that are subject to different rules, including one-, two-, three-family homes, cooperatives and condominiums, small rental buildings with four to 10 units, and large rental buildings with 11 units or more.

And because it’s structured as a levy system that pools tax revenue from across the various classes, policymakers are forced to decide how to redistribute the formula more equitably all while not costing the city lost tax revenue.

“The city winds up with a bigger disparity than most places,” said Sweeting. “The formula was supposed to remove that, but the formula put in place what was already a system with very big differences in the tax burden and that perpetuated what you already had, which wasn’t a very equitable system.”

That’s meant taxpayers seeing their tax bills go up even if the effective rate hasn’t changed. Tax rates as a percent of market value varying among different types of property, with homeowners paying lower rates than owners of commercial and residential rental property. And homeowners often paying widely varied effective tax rates even within an individual class.

The 2017 lawsuit by the TENNY coalition focused on that inequity. But in February 2020 the state Supreme Court Appellate Division dismissed a constitutional challenge by the coalition of real estate interests and civil rights groups. The court found that the coalition had failed to show a link between racial segregation in city neighborhoods and the property tax system in its lawsuit.

The coalition has said it would appeal the court’s decision but has not provided a timeline.