Packages stacked for delivery on June 11 in New York City illustrate the volume of online shopping that makes the plethora of state sales taxes a challenge for sellers.
Photographer: Jeenah Moon/Bloomberg

The expanding patchwork of state laws addressing e-commerce in the aftermath of the South Dakota v. Wayfair ruling has provoked business groups and federal lawmakers to campaign for greater uniformity, consistency, and clarity in state sales tax codes.

With the states galloping past the tax-free period of the online shopping era, the lack of uniformity is glaring. Dozens of new state laws enacted since the Supreme Court’s June 21, 2018, Wayfair ruling feature inconsistencies in tax rates, tax bases, filing procedures, and thresholds for compliance.

“It’s one thing if states impose their tax regimes on national companies,” said Stephen P. Kranz, a tax attorney with in the Washington office of McDermott Will & Emery LLP. “It’s an entirely different burden if 10,000-plus taxing jurisdictions, each intent on enacting requirements on national or multi-state companies. It’s a tremendous burden, and in my mind Wayfair doesn’t go that far. Locals that attempt to expand with no attempt at uniformity or simplification are at a significant risk of litigation.”

It will be difficult, however, for advocates of uniformity to gain traction. States and localities appear largely satisfied with the new sales tax code landscape, insisting the rules they’ve rolled out over the past two years are uniform, consistent, and clear enough to beat back any legal challenges.

States welcomed the high court’s ruling, which permitted them to impose tax collection duties on remote retailers on the basis of “economic nexus”—a measure of economic activity within a state—rather than physical presence. Revenue officials say that sales tax uniformity was never a possibility, nor was it an expectation: The Supreme Court was merely asking the states to deploy rational tax collection systems that don’t discriminate or impose undue burdens on interstate commerce.

“You will never have lock-step standardization of the tax systems across the country, and you shouldn’t, because federalism is a system where you have state governments with independent authority to address the problems that exist in their states,” said Dan Bucks, former executive director of the Multistate Tax Commission and one of the original architects of the 25-year campaign to tax remote sellers. “We have a very diverse country and you can’t straitjacket fiscal systems.”

This tension between sellers and states will play out on multiple stages in the year after the second anniversary of Wayfair. Business groups may convince Congress to discipline the states. Remote retailers may challenge individual state laws that they say burden interstate commerce. States could take steps toward harmony through four multistate legal and legislative advocacy groups. And technology could play a larger role reducing compliance burdens on remote retailers. 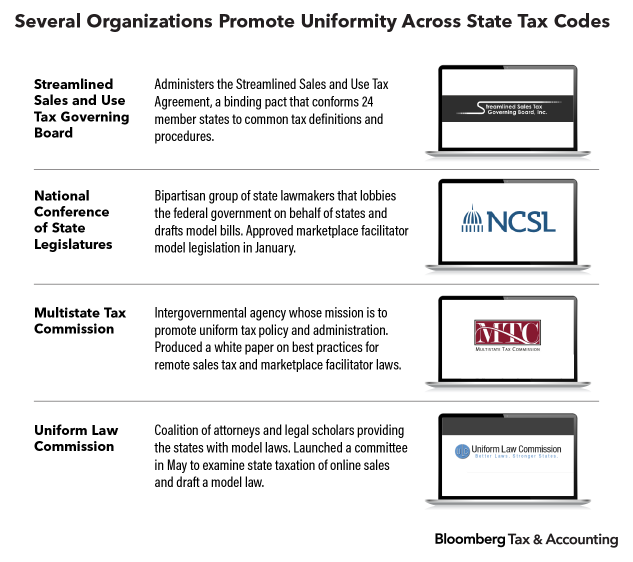 Wayfair tossed out the Supreme Court’s 1992 physical presence standard, affirmed in Quill Corp. v. North Dakota, that had limited the ability of states to tax remote sales. The Wayfair decision suggested strongly that South Dakota’s law, which requires remote vendors to collect sales tax if they have more than $100,000 in sales or 200 transactions to buyers in the state, would pass constitutional muster.

A Patchwork of Laws

Since the ruling, all but two of the 45 sales tax states have started requiring remote sellers to collect and remit taxes based on economic nexus. In addition, more than 40 states have passed marketplace facilitator laws, which place a duty to collect and remit sales tax on large websites, such as Amazon Marketplace, eBay Inc., and Etsy Inc., that broker transactions for other merchants.

“The framework itself, when you look in the aggregate, is not really uniform, and that causes problems for companies that don’t have the experience of having to deal with 45 state jurisdictions at once,” said Jamie Yesnowitz, a state and local tax practice and national tax office leader at Grant Thornton LLP.

Yesnowitz, together with a group of small business owners, made a case for Congress to impose tax code harmony across jurisdictions during a March 3 hearing before a House small business subcommittee. No legislation resulted from the hearing, but the chairman, Rep. Andy Kim (D-N.J.), offered to lend assistance that respects the rights of both states and small businesses. The pandemic sidelined plans for a similar hearing in the Senate.

The courts could also serve up a dose of uniformity if retailers file lawsuits asserting features of state tax systems conflict with the Wayfair precedent, Yesnowitz and Kranz said.

Karl Frieden, general counsel of the business-focused Council on State Taxation, called for a coordinated effort between the business community and the states to limit the number of different tax rates, as well as to create common tax bases, common definitions of taxable goods, limits on the taxation of business inputs, and common protocols for tax administration.

Bucks acknowledged that tax systems and taxpayers would benefit from more standardization, but insisted that the current network of laws and regulations fit within the framework articulated by the court. Complaints about uniformity, he said, ignore significant strides the states have taken to harmonize their tax structures since Quill and Wayfair.

The Streamlined Sales and Use Tax Agreement is the most effective harmonization tool available to the states, serving as a backstop against legal challenges and federal intervention, said Craig Johnson, executive director of the governing board operating the agreement.

The SSUTA, which became effective in 2005, is a binding pact among 24 states aimed at standardizing tax practices for remote sellers. Important features across the member states include centralized tax administration, uniform tax bases, standardized definitions, a central electronic registration portal, and access to free tax administration software through certified service providers, or CSPs.

Many states aren’t ready to conform to SSUTA, but Johnson touts recent efforts permitting non-members to adopt some features. In January, for example, the governing board approved a resolution and model act permitting non-member states to use the SSUTA’s CSP and central registration programs.

Several other organizations have been working on tax policy harmony.

The National Conference of State Legislatures, a bipartisan group of state lawmakers, has worked on uniform laws and lobbied Congress on sales tax issues for at least 25 years. The NCSL in January approved marketplace facilitator model legislation, which has been used as a template for action in several states.

The Uniform Law Commission is the latest organization to join the effort, forming a committee this year to examine state taxation of online sales. The commission, a coalition of lawyers, lawmakers, and legal scholars, is expected to spend two years studying and drafting a model law aimed at harmonizing sales tax statutes.

Tax professionals point to two additional forces in the tax ecosystem that have the potential to solve even the most stubborn uniformity problems: time and technology.

Much of that complexity can be solved by software systems readily available to sellers, she said. The streamlined states understood that when they deployed their CSP program, which allows businesses to outsource most of their tax administration work. Avalara is a certified provider, together with the software companies TaxCloud, Sovos and AccurateTax.

“The business community is used to the dynamic environment,” Armbruester said. “I don’t think anybody is expecting we will get to a consistent state where states do everything alike.”