The Senate on Wednesday voted to move ahead with a broad infrastructure package, just hours after a bipartisan group of senators and President reached accord on a $550 billion plan that is a major step forward for the White House’s economic agenda.

The 67-32 procedural vote doesn’t guarantee that the package of spending on physical infrastructure will pass the Senate, but is a good indication that it may have enough support. Lawmakers expect votes on amendments and final passage to last into the weekend and possibly next week, with an eye to salvaging a long recess set to begin Aug. 9.

Seventeen Republicans joined all Senate Democrats and two independents in voting to move ahead, including Senate GOP leader , Senator of Missouri and Senator of West Virginia. 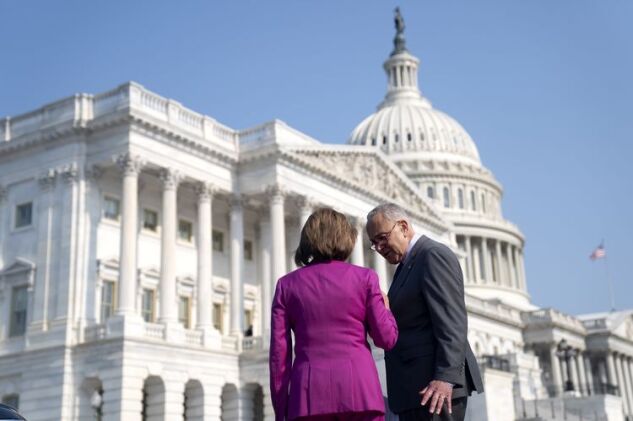 Chuck Schumer, right, speaks to Nancy Pelosi, while arriving to a news conference outside the U.S. Capitol, on July 28.
Photographer: Stefani Reynolds/Bloomberg

A core group of negotiators led by Republican Senator of Ohio and Democratic Senator of Arizona hammered out the infrastructure deal after lawmakers failed to muster the votes to begin debate last week and more than a month after they and Biden announced agreement on the basic framework.

“Our plan will create good-paying jobs in communities across our country without raising taxes. Reaching this agreement was no easy task -- but our constituents expect us to put in the hard work and show that two parties can still work together to address the needs of the American people,” the group of nine Republicans, 10 Democrats and one independent said in a statement.

Among the projects that would get money, according to the White House:

“This deal signals to the world that our democracy can function, deliver, and do big things,” Biden said in a statement. It “will help ensure that America can compete in the global economy just when we are in a race with China and the rest of the world for the 21st century.”

But several Republicans, including of Florida and of Texas, blasted the overall price tag and said they would oppose the bill.

“Congress can’t keep spending trillions of dollars we don’t have,” the senators said in a statement. “The infrastructure package announced today continues the trend in Congress of insane deficit spending.”

Democrats unsatisfied with the level of spending for transit and water projects in the bill are expected to seek amendments on the floor to change those sections. Republicans also are likely to seek changes.

If the Senate is able to pass the bill in the coming days, Democrats hope to quickly pivot to passing a budget resolution for fiscal 2022 which would set up a fast-track process to enact much of the rest of Biden’s economic agenda without any Republican support.

Senate Majority Leader said his goal is to pass the infrastructure legislation and the budget resolution before the Senate’s scheduled August break begins at the end of next week.

Senate Budget Chairman told reporters he has the 50 votes needed to pass a budget resolution. While Democrats on the Budget Committee have put forward a $3.5 trillion proposal of tax increases and social spending, Sinema on Wednesday announced she doesn’t support spending at that level. She said she will vote with her party to approve the initial budget plan but then later try to alter the scope of the economic package itself.

The budget resolution does not necessarily need to have a final top-line spending level, so her announcement may still allow the Senate to quickly pass that outline and save battles over the particulars for a vote in September. Still, that may create complications for final passage of both the infrastructure plan and the budget package.

House Speaker has made plain that the infrastructure legislation won’t be voted on until the Senate passes the second tax and spend package.

On Wednesday House Congressional Progressive Caucus leader Pramila Jayapal of Washington backed up that statement with a threat to vote down the infrastructure bill if the group’s priorities aren’t met.

(Updates with vote breakdown in third paragraph, Schumer on schedule in 14th)