Bank of Marin had gathered the data, loaded the systems, and was ready to roll out the biggest-ever change to its accounting this year.

Then businesses shuttered, schools closed, and most of the country went into lock-down mode as the coronavirus spread. Days before the San Francisco Bay area bank closed the books on its first quarter, Congress offered banks the option to delay that massive accounting change. Tucked into the $2 trillion coronavirus relief law President Trump signed March 27 was a provision that allowed banks to put off the current expected credit losses (CECL) standard until the end of the year or until the national emergency was declared over. (Public Law 116-136)

The 22-branch, $2.7 billion bank took the relief. It is one of only about 20 banks nationwide so far to do so.

“Going into earnings, we had indications we might be one of the few that decided to delay. But we felt we had some very compelling reasons to do that,” said Tani Girton, the bank’s CFO.

The majority of U.S. banks overhauled on time how they account for losses on souring loans, as prescribed by CECL, according to quarterly earnings filings. The reasons for rejecting Congress’s relief vary; the few lines inserted into the sprawling law didn’t quite give enough relief, many banks said, and then the way regulators interpreted the law made it even less appetizing to defer the accounting change.

But for the northern California bank, taking the extra time boiled down to one thing: resources. Customers needed extensions on their loan payments and then more than a thousand small businesses applied for special loans to get them past the the worst of the economic fallout. Extra breathing room on an accounting change, no matter how brief, made sense, Girton said.

“Our customers needed our attention,” she said. “We took advantage of the opportunity to delay so that we could focus on them in this difficult time.”

The banks that opted for the delay are smaller, publicly traded institutions. They range from the Novato, Calif.-based Bank of Marin and Porterville, Calif.-headquartered Sierra Bancorp with $2.7 billion assets apiece to Cathay General Bancorp, a Los Angeles-based institution with 65 locations and $18.3 billion in assets. 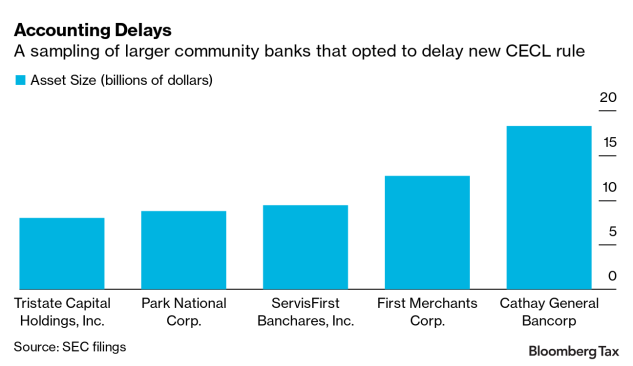 The reasons they cited are as diverse as the banks themselves. Some said the central premise of the new accounting—recording losses before they happen—was too complex of an exercise in such an unpredictable economy. Developed by the Financial Accounting Standards Board in the aftermath of the 2008 financial crisis, the new accounting rule requires banks and other businesses to look to the future, assess current conditions, and consider past experience to come up with their losses, as opposed to booking them after they happen.

Northeast Indiana-based First Merchants Corp., which holds about $12.7 billion in assets, wanted more time to get a better handle on the economic fallout from the pandemic, First Merchants Finance Director Michele Kaiwecki said on the bank’s first-quarter earnings call.

“The benefit of waiting to implement is that we will have a better view of the impact of this pandemic, the government’s stimulus programs and the impact of our own initiatives on our region and the communities we serve, which should minimize volatility in earnings,” Kaiwecki said.

Birmingham, Ala.-based Servisfirst Bank CEO Thomas Ashford Broughton said during his bank’s earnings call that the difference between the losses the $9.36 billion bank would have set aside under CECL versus the old accounting model was “not a meaningful amount.”

“We thought the best thing to do was to just take a conservative stance and don’t do anything new,” Broughton said.

Broughton also said part of the bank’s reason to take the delay was that there is a chance that Congress might “kill” the standard altogether.

But Rep. Brad Sherman (D-Calif.), said in an interview that he will not “put forward a bill that goes beyond coronavirus needs.” Instead, the lawmaker, who chairs the House Financial Services Committee’s Investor Protection, Entrepreneurship, and Capital Markets Subcommittee, introduced a bill April 17 that would clarify when banks need to comply with CECL after the pandemic is declared over.

“I could have written the ‘Death to CECL Act,’ and put that forward as great legislation, but my focus now is, ‘Let’s do things relevant to coronavirus,” Sherman said.

While the handful of small banks decided to take the delay, the country’s largest banks largely shrugged off the opportunity given their ability to weather economic downturns. The nation’s four largest banks—JPMorgan Chase & Co., Citigroup Inc., Bank of America Corp., and Wells Fargo & Co.— all implemented CECL on time, recording significant boosts to their loan loss reserves.

Even the sharpest critics of the standard—mid-sized banks and so-called super regionals like Capital One Financial Corp. and what is now Truist Financial Corp.—adopted the standard on time. In the years leading up to the new accounting, these banks and many others told lawmakers, regulators, and FASB that CECL would force them to needlessly shore up loan loss reserves, shrink earnings, and dry up lending in an economic downturn.

Such criticisms led to Congress inserting the CECL delay in the March coronavirus relief package. The law offered them the option to wait until Dec. 31 or when the coronavirus national emergency is declared over—whichever comes first—before adopting the standard.

But the details didn’t add up to much real relief. The Securities and Exchange Commission told an American Institute of CPAs panel and representatives from five accounting firms on an April 3 phone call that if the national emergency were declared over mid-year, banks would have to adopt CECL in their next quarterly financial statements and also calculate losses under the standard back to the beginning of the year—Jan. 1 for calendar-year companies. The upshot: no real break.

Many banks were shocked by the SEC’s narrow, strict interpretation of the law.

“To me, it’s kind of like, what’s the point? It doesn’t give you anything,” said James Kendrick, vice president of accounting at the Independent Community Bankers Association.

Still, the break clearly appealed to some banks. Now, analysts must sort through the confusion of some banks reporting losses—a central part of a bank’s financial health—under completely different rules compared to the majority of others.

“It’s a mess with the mix, to be honest,” said Michael Perito, managing director at Keefe, Bruyette & Woods.