A handful of small banks are using a new tax benefit to prop up reserves against future losses beset by the coronavirus pandemic that has roiled the U.S. economy.

The third coronavirus relief law (Public Law 116-136), commonly known as the CARES Act, allowed companies to use net operating losses (NOLs) to retroactively offset taxes for five years, resulting in a one-time tax benefit. The change was enacted on March 27, just in time for some banks to immediately use the tax perk before the first quarter ended on March 31.

At least 11 banks of varying sizes jumped at the new tax advantage to help boost reserves, at a time when banks’ liquidity positions remain strong, but deep recession clouds are continuing to mount over the U.S. and global economy.

And while the perk may be a drop in the bucket, some banks need all the help possible to build up reserves against the expected loan-loss drought stemming from widespread payment deferrals as a result of the pandemic.

Analysts largely project fundamental economic figures like GDP and unemployment to crater in the second quarter and for the foreseeable future, causing banks to continue reserving against those future losses.

There are many unknowns, but banks are making the call based on those dire predictions, said Bloomberg Intelligence analyst Herman Chan. 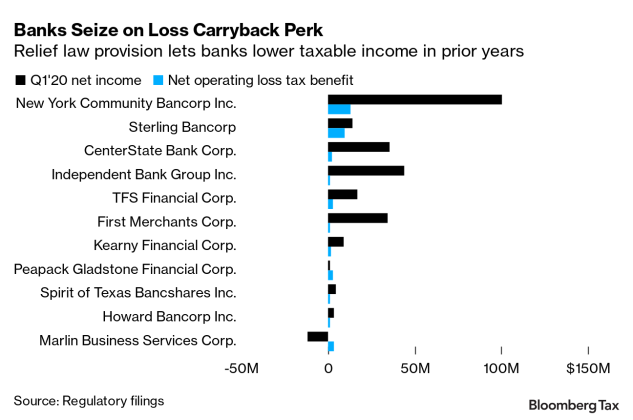 Few banks used the tax advantage because it is limited to their tax positions. If a bank doesn’t have prior NOLs to use, or if those NOLs are too small to be of any benefit, it’s likely the institution passed on the opportunity.

To use the perk, banks carry back losses into years with higher tax rates, resulting in one-time tax benefits that could be in the millions of dollars, depending on the company’s tax-loss position. The CARES Act re-opened the door to carry back those losses—the 2017 tax law limited the perk.

According to data compiled by Bloomberg Tax, New York Community Bancorp Inc. posted the largest NOL tax benefit of the quarter, raking in $13.1 million. The New York-based bank, which operates 239 branches across five states, reported $100.3 million in net income for the quarter, compared to $97.6 million in the first quarter of 2019.

Jefferies equity analyst and Vice President Casey Haire said the banks that used the perk does not reflect weakness at those institutions, but rather they were quick to notice the provision in the law and used it. Haire also said banks that could have used the benefit might have missed it because their focus at the end of the quarter was on larger credit issues.

“They found a clause that they took advantage of to help them out on the margin very slightly,” Haire said.

Indiana-based First Merchants Corp., which holds about $12.69 billion in assets, reaped a $1.2 million NOL tax benefit in the quarter, according to quarterly regulatory filings.

First Merchants’ Director of Finance Michele Kawiecki said the bank recorded a $19.8 million provision in the first quarter, mostly driven by the coronavirus pandemic. As a result, the big provision, along with the NOL tax benefit, lowered the bank’s effective tax rate in the quarter to 9.2%. In the first quarter of 2019, the bank reported an effective tax rate of 15.2%.

“That’s a one-time item and we would anticipate if we have similar levels of provision that the tax rate will go to about 12.5%,” Kaweicki said during the bank’s first-quarter earnings call. “The NOL was pretty significant and the fact that we had a large provision this quarter pushed the tax rate even lower.”

While the carryback represents a relatively small benefit to banks’ overall earnings figures, it will help them brace reserves for a slew of losses likely to come later in the year, Chris Marinac, a bank equity analyst for Janney Montgomery Scott, said.

“I think the banks are going to keep building reserves pretty aggressively in the next few quarters,” Marinac said. “The NOLs and the tax savings, when they exist, is a sort of nice bonus. I don’t think it is a game changer, but it certainly helps.”

Banks, especially on the smaller side, are rapidly building reserves to account for future losses on loans because of mass layoffs the coronavirus pandemic has caused, Marinac said. When consumers cannot pay back loans, banks are on the hook to eat losses on interest payments they would have made.

Coupled with a new loan-loss accounting standard implemented on Jan. 1, reserve builds for banks large and small jumped even more in the first quarter. The nation’s four biggest banks added almost $18 billion in loan-loss reserves to help them weather the wave of losses and comply with the current expected credit loss accounting standard, known as CECL.

Because income sources from loan-holders have dried up as a result of mass store closures or layoffs, many loans—like mortgages, auto loans and other credit vehicles—are likely to default. That, in turn, causes banks to lose money they would have made on interest, restricting their ability to again re-lend money to other customers.

As a result, banks have begun a massive surge in reserving against future loans. Many banks have forgone compensation payouts for executives in order to bolster those reserves. And any new money, like interest made on Paycheck Protection Program loans made by banks, as well as the NOL tax benefits, are going straight to those reserves. The PPP is a loan program created in the CARES Act to encourage small businesses to keep employees on their payroll.

“Banks are doing as much as possible to shore up their allowance for loan losses and preserve capital for the eventual losses that are coming ahead,” Chan said. “We’re not sure what the depth and duration of the virus impact is going to be right at this point, but we know it’s going to be bad.”