The steep and climbing cost of unemployment during the Covid-19 pandemic could give state policymakers déjà vu from the Great Recession—when states used unemployment tax increases and benefit cuts to rebuild unemployment trust funds depleted by millions of job losses.

That’s assuming states don’t get a significant federal bailout, which policy analysts say looks less likely if Republicans hold on to their majority in the Senate.

This year’s record-high unemployment benefits during the pandemic have amounted to more than $500 billion. In less than a year, payments have dwarfed the $293 billion in benefits paid between 2008 and 2013 during the Great Recession and its aftermath. Georgia’s labor department recently said it has paid out more benefits since March than in the previous 28 years combined.

The bulk of this year’s benefits have come from temporary federal programs Congress created in response to the pandemic, but about $130 billion has come through traditional, state-run unemployment insurance paid for by taxes on employers. This includes $40 billion that 20 states have borrowed so far from the U.S. Treasury to keep paying benefits after depleting nearly all of the $75 billion states held in trust funds at the start of the year.

States will face tough options for covering the costs unless Congress provides relief such as loan forgiveness or more time to repay. States could foot the bill by increasing unemployment tax rates that businesses pay, cutting the amount or duration of benefits that laid-off workers still need, or devoting federal CARES Act money to unemployment trust funds.

The Treasury borrowing could climb substantially higher before employment returns to pre-pandemic levels, as the latest surge of new coronavirus cases raises the possibility of business restrictions and shutdowns returning in some parts of the U.S., potentially prolonging or increasing high unemployment levels. Republican governors from Maryland to Utah recently imposed new restrictions on large gatherings, while Democratic governors in New York, New Jersey, and Minnesota revived restrictions on restaurants and bars.

“The challenges with state unemployment fund solvency will be quite widely spread when compared to the aftermath of the 2007 to 2009 financial crisis,” said Indivar Dutta-Gupta, a law professor and co-executive director of Georgetown Law’s Center on Poverty and Inequality. “The big factor that could change that expectation is Congress acting.”

Around a dozen states have committed a portion of the direct relief funds received through the CARES Act to restocking their unemployment reserves—Georgia among the most recent with Gov. ’s (R) announcement of plans to devote up to $1.5 billion to the trust fund. Alabama, Iowa, Maine, South Carolina, South Dakota, and West Virginia, among others, took similar steps but with smaller dollar amounts. The CARES Act money that states have dedicated to unemployment accounts for a small fraction of the $130 billion states have spent on benefits this year.

A handful of states account for the bulk of the Treasury borrowing. Through Nov. 9, California has borrowed $15.8 billion, New York $8.4 billion, Texas $5.3 billion, and Illinois $2.6 billion. States have roughly two years to repay Treasury loans. After that, the federal portion of unemployment taxes automatically increases each year for businesses in the delinquent state until the debt is repaid. California employers paid an estimated $10 billion extra in federal unemployment taxes between 2012 and 2018 because of the state’s lingering Treasury loan balances from the Great Recession. 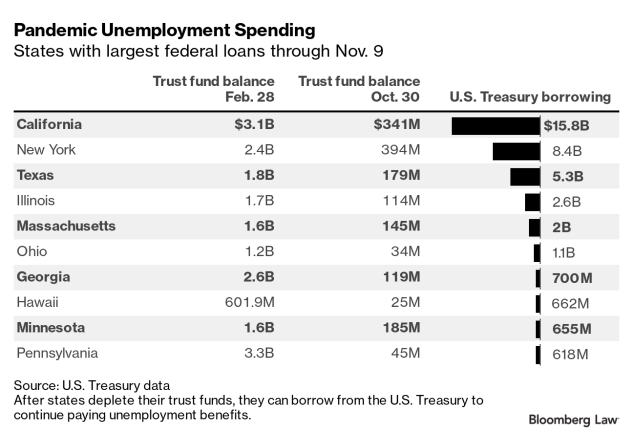 Without the legislation, A.B. 4853, New Jersey businesses would see more than $1 billion in unemployment tax increases automatically triggered by the state’s low unemployment trust fund balance, said New Jersey Assembly Majority Leader (D), who is sponsoring the bill. The bill passed the state Assembly unanimously and is waiting for a vote in the Senate, which already passed an identical bill.

“We’re trying to spread it out to ease that pain and make sure that between the revenues that will come into the fund along with federal support, we will have enough to cover any unemployment claims that arise, but at the same time alleviate that burden off the backs of businesses,” Greenwald said.

Louisiana took a similar approach, enacting a bill (SB 55) that instructs its unemployment program administrator to follow a formula that assumes there is $750 million in the UI trust fund. The legislation essentially delays an estimated 30% tax increase that would have automatically taken effect next year due to the depletion of the state’s trust fund, said state Sen. Mike Reese (R) who sponsored the legislation, which Gov. John Bel Edwards (D) signed into law Oct. 28.

Letting the increases take effect would have “created a disincentive for new hires, because it is a payroll tax, so they incur that increase in tax on each and every new employee they hire,” Reese said.

A number of other states, including California, Delaware, and Mississippi, have enacted legislation that prevents increases on individual employers based on their large numbers of layoffs related to Covid-19.

Perhaps the simplest relief Congress could provide—albeit limited in scope—would be to extend the interest-free treatment of Treasury loans, which it has already provided through the end of 2020.

“But there is still going to be a substantial tax hike associated with the states that have taken those loans, because we are at like $40 billion and counting right now,” he added.

Greenwald said he’s hopeful the break on interest will continue under a Biden administration.

The interest-free treatment is a repeat of relief that Congress provided states during the Great Recession. Under the American Recovery and Reinvestment Act of 2009, state unemployment agencies didn’t have to pay interest on U.S. Treasury loans from February 2009 through December 2010.

That interest forgiveness saved states an estimated $2.2 billion over the life of those loans, according to 2016 research produced for the U.S. Department of Labor. Treasury loan balances from that recession peaked at $47 billion in early 2011.

Unemployment rates in many states have dropped significantly since the Covid-19 surge in March and April, but they remain high in a number of states, particularly among those that are some of the biggest borrowers of Treasury funds for unemployment benefits. California, Hawaii, Illinois, Nevada, and Rhode Island still had double-digit unemployment rates ranging from 10.2% to 15.1% in September, the latest available federal data. Massachusetts and New York hovered just below double digits, at 9.6% and 9.7%, respectively.

In California, by far the largest borrower of federal unemployment funds, the unemployment rate stands at 11%.

“That shift toward long-term unemployment compensation is taking over in California, just looking at the trends,” said Sarah Bohn, vice president of research at the Public Policy Institute of California. “That’s going to continue to grow and be a pressure point.”

The trend limits the state’s already limited options. California could raise the taxable wage amount that’s subject to unemployment taxes—currently only the first $7,000 of each employee’s wages—but that would translate into a tax increase that could “curtail the job growth we need to see in a recovery,” she said.

Thus far, major states including California, New York, and Texas aren’t publicly committing to a particular amount of tax increases for 2021. Ohio, on the other hand, plans to add a 0.5% “mutualized tax rate” in 2021 that applies to all employers to help stabilize the unemployment trust fund, said Bret Crow, spokesman for the Ohio Department of Job and Family Services. The last time the state tacked on the mutualized rate was in 2012, he said.

In California, that state’s unemployment tax was already operating on its highest rate schedule during 2020, although individual employers could see increases based on their experience ratings, said a spokesperson for the state’s Employment Development Department.

In New York, the state’s labor department is considering its options for dealing with its depleted unemployment trust fund, spokeswoman Deanna Cohen said.

And in Texas, the leaders of the Texas Workforce Commission will meet later this month or in early December to decide whether to pursue rate increases or other options, said spokesman James Bernsen.

“It’s really going to depend on a lot of factors that we still don’t know,” including whether Congress provides any further stimulus money to states, he said. “Obviously we’re in a different world in terms of how things are normally done.”

To contact the editors responsible for this story: at khardy@bloomberglaw.com; at jharrington@bloombergtax.com