House Speaker Nancy Pelosi, (D-Calif.) and Senate Majority Leader Mitch McConnell (R-Ky.). U.S. legislators have not been able to agree on aid to states, and governors and mayors from both parties fear the potential effects of the impasse.
Photographer: J. Scott Applewhite/AP Photo/Bloomberg

There’s little chance of agreement on a new federal coronavirus relief plan without a compromise on the roughly $1 trillion in aid to beleaguered state and local government that Democrats demand and the White House opposes.

Democrats have offered to cut their original stimulus proposal totaling $3.5 trillion by roughly one third, but insist on keeping help for states, cities and other municipalities. President ’s negotiators, in addition to rejecting the Democrats’ topline number, have offered to put in no more than $150 billion for local assistance.

Negotiations are at a standstill heading into two weeks in which the Democratic Party then the Republican Party hold their respective presidential nominating conventions. 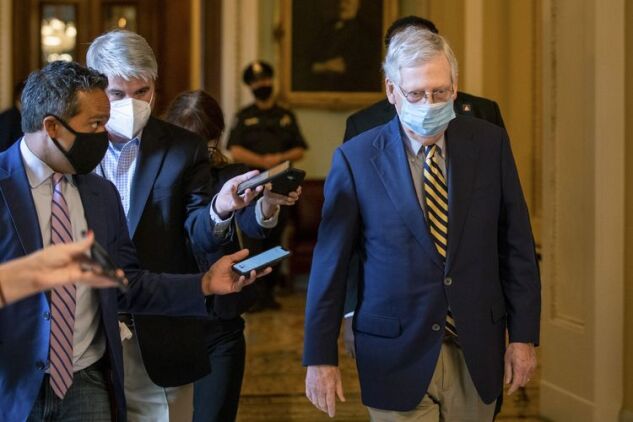 Senate Majority Leader said Thursday the Senate is in recess and will not hold votes until Sept. 8 -- although senators, like members of the House, can be called back on 24 hours notice if a stimulus deal has been made.

“I’m still hoping we’ll have some kind of bipartisan agreement here, some time in the coming weeks,” McConnell said as he left the Senate floor.

The chasm between the two sides, and potential for the impasse to stretch well into September, has governors and mayors from both parties on the edge.

“This is not about ‘bailing out’ red states or blue states for pension problems or to make up for previous policy failures of other states -- this is about delivering rapid relief for states so the governors can manage and provide flexibility for their residents,” New Hampshire’s Republican Governor tweeted this week.

“If we do not get federal help we have very difficult, no-win choices to make on the cut on local services, particularly our police and fire services,” Dayton, Ohio, Mayor , a Democrat, said on a recent conference call organized by the U.S. Conference of Mayors.

Although there are other areas of disagreement -- among them, McConnell’s plan to shield employers from liability for Covid-19 infections, and House Speaker ’s drive to bolster the U.S. Postal Service -- the question of state aid may be the biggest stumbling block.

Senate Republicans included no aid for local governments in their initial proposal for the next stimulus bill released at the end of July. It did include $105 billion for schools, which are mostly funded by states and cities, and $16 billion in grants to states for coronavirus testing, contact tracing and surveillance. 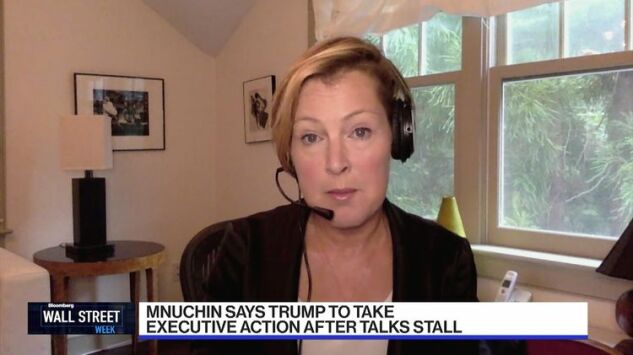 The Republican plan also would give states and municipalities more flexibility on how to use unspent portions of the $150 billion provided in the virus relief bill passed in March.

The GOP language would block any of the money going to state pension funds. Republicans insist that generous deals struck over the years by Democratic mayors and governors with public employee unions have caused their fiscal woes, and don’t intend to plug what in some cases are huge funding holes.

“Democrats think they smell an opening they have wanted for years, to make Uncle Sam bail out decades of mismanagement and broken policies in places like New York, New Jersey and California,” McConnell said this week, citing three solidly Democratic states.

Pelosi rejected that as insufficient. She said that she and Senate Democratic Leader are willing to meet Republicans at some “middle ground,” but that, “it’s no use sitting in a room and let them tell us that states should go bankrupt.”

The Democratic plan passed by the House in May would provide $915 billion in state and local aid. More than half would go to states and Washington D.C, with the first portion awarded within 30 days of enactment and the rest no later than May 3.

The National Governors Association has made a plea for $500 billion in unrestricted aid just for states. The organization in a statement Thursday said that a failure by Congress to take action “would lead to massive cuts to the very services that are sustaining millions of Americans during the pandemic and recession, and that are necessary for a rapid and sustainable recovery.”

To that point, a Moody’s Analytics report released June 25 said without more assistance, state and local governments will be forced to make budget cuts that could shave as much as 3 percentage points from the pace of economic growth and result in the loss of about 4 million jobs.

Pittsburgh’s Democratic mayor, , said during the mayor’s conference call that his city is facing a shortfall this year of about $100 million with few ways to make it up.

“The vast majority of our funding goes to public safety services,” Peduto said. “Across-the-board cuts throughout every department would be mandatory. It is very difficult to raise taxes on people who are losing their jobs.”