"You will note take it to a tax haven," reads a protestor's sign in Toulouse, France, in February.
Photo by Alain Pitton/NurPhoto via Getty Images

Tax-dodging corporations with outposts in offshore havens risk being left high and dry when European nations hand out to companies devastated by the Covid-19 pandemic.

A growing number of countries said they may exclude companies based in the Cayman Islands, Panama, the U.S. Virgin Islands and other states on a blacklist of “non-cooperative jurisdictions for tax.”

Upholding its Nordic reputation for fair play, Denmark has taken the lead, prompting politicians across the 27-nation EU to call for similar action as public impatience grows over rescues going to tax-dodging companies.

“You cannot ask the Danish society for help one day only to turn your back on the community the next and send your money to a country on the EU’s list of tax havens,” the Nordic nation’s Business Minister said in an email. “It is simply not fair.”

From manufacturing to banking, the use of havens has become a central -- and legal -- part of business models. But the debate is now echoing Europe’s response to the sovereign debt crisis: the more governments open up , the more pressing the questions they face about who gets bailed out by taxpayers. 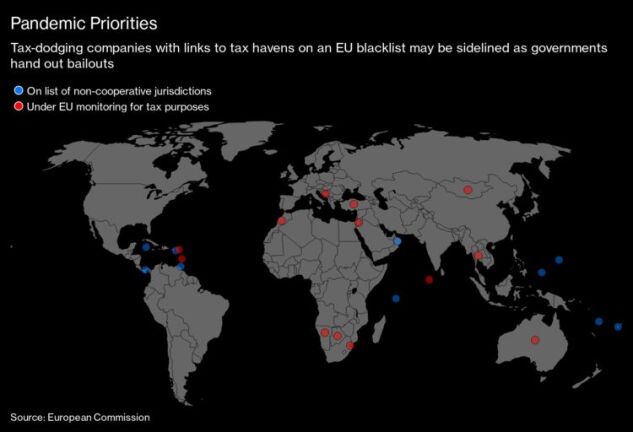 “Even with the EU’s very limited list, some of the biggest and most high profile European companies would fall foul of a bailout approach that barred tax haven subsidiaries -- and mostly because of their use of the Cayman Islands,” said Alex Cobham chief executive officer of the , a tax advocacy group.

Cobham said 2017 research with the CORPNET group at the identified tax-haven subsidiaries in dozens of companies from to , and from to . Fiat and HSBC declined to comment and the others had no immediate response when asked by Bloomberg about their current tax arrangements.

While such emotions seem understandable, tax experts warn that penalizing firms using offshore structures may have a limited effect in practice -- and could even miss far worse cases of tax dodging closer to home.

“The pandemic is clearly being seized on by people as a reason for doing what they’ve always wanted to do,” said Dan Neidle, a tax lawyer at

“This is completely the wrong approach. If there are structures involving tax havens that we think are unfair, then we should close them down, we shouldn’t be withholding aid to companies,” he said.

Aid bans risk being “virtue signaling” in making a point about taxation when it would be more effective to say there is a clear quid pro quo to a bailout, said , a professor of tax law at .

Even though the Danish ban would affect some 70 businesses mostly based in the Cayman Islands, it “appears rather toothless,” said Yvette Lind, a tax law assistant professor at the .

That’s because a large part of the Nordic nation’s tax losses are to nearby , and the , more famed for its canals than palm-tree-lined beaches.

The Dutch government has frequently stated that preventing the country from being used as a tax conduit is one of its priorities.

But the point isn’t lost on Italians who failed to persuade the Netherlands to accept so-called , or joint debt issuance, as the lockdown aimed at containing the spread of Covid-19 brought their economy to a near-standstill.

“It’s difficult to expect solidarity from the Dutch, who have set up a tax haven,” , undersecretary at the Italian finance ministry, said in an interview with on April 15.

The Tax Justice Network’s Cobham said “a more serious list including EU tax havens like the Netherlands, for example one based on our Corporate Tax Haven Index, would bring even more companies into scope.”

But while EU governments can set some on bailouts, they need to comply with rules that allow companies to do business across the bloc -- which would prevent a ban on companies based in other EU countries.

What can be excluded are “companies based in tax havens as defined by the relevant EU legislation and companies with a long-term debt” to tax authorities, the said.

Taxpayers, he said, could then be sure that recipients of money that could otherwise be spent on priorities such as the health service “have truly changed their ways.”