This has been a hectic tax-filing season for the IRS, which now must adjust to changes from a recently enacted pandemic aid law.
Photographer: Daniel Acker/Bloomberg

The IRS’s recent decision to extend the tax-filing season for certain individuals creates headaches for the millions of people who are excluded, while bringing limited benefit to tax preparers, accountants say.

The IRS, in a news release Wednesday, said individual taxpayers could postpone paying and filing their federal income taxes until May 17—without penalties and interest. The original deadline was April 15. The extension was first reported by Bloomberg News and followed calls from lawmakers and trade groups—like the American Institute of CPAs—to push the deadline to give tax professionals and their clients more time to prepare returns, especially after the enactment of new Covid-19 relief measures earlier this month.

The filing extension, as it currently appears, stands to benefit the IRS more than taxpayers, said Geoffrey Harlow, a partner at Wipfli LLP.

The agency began the year with a backlog of returns from last year’s tax season, and now has to make programming changes mid-filing season to accommodate a provision in the latest Covid-19 relief package that exempts the first $10,200 of 2020 unemployment income from federal taxes for people earning less than $150,000. So a delay can help them catch up with that work.

While this extension provides relief to millions of people who may need additional time to file their taxes, there are millions more that have been left out. 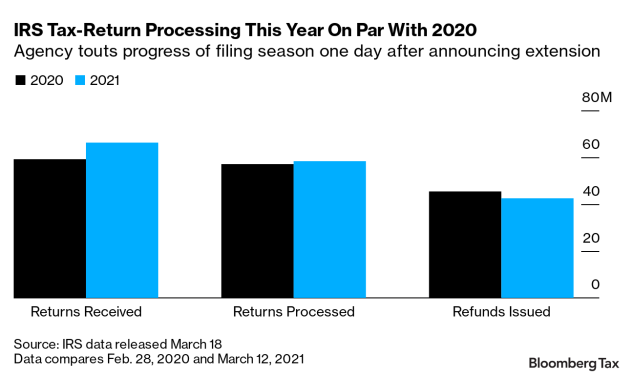 IRS Commissioner Charles Rettig said during a congressional hearing Thursday that the extension only applies to the Form 1040, the federal income tax form for individuals. That decision was made to accommodate the most vulnerable people, he said.

He noted the extension doesn’t apply to corporate income tax returns or estimated tax payments due on April 15. Estimated taxes are generally paid quarterly to the IRS by people whose income isn’t subject to income tax withholding, including self-employment income, interest, dividends, alimony, or rental income.

The IRS decided against extending the deadline for estimated taxes because there’s a large contingent of wealthy individuals who don’t make their payments and instead invest that money.

“We’re not going to give them a break of interest and penalties to do so,” Rettig said.

The AICPA, in a statement late Wednesday, also noted the extension doesn’t seem to apply to returns used to estate and trust income taxes.

“This selective decision by the IRS unfortunately creates more bureaucracy and confusion and is out of sync with real world stresses that taxpayers, tax practitioners and small businesses are dealing with,” the group said, adding it wants the filing season extended to June 15.

Victims of the February winter storms in Texas, Oklahoma and Louisiana still have until June 15 to file various individual and business tax returns and make tax payments.

The IRS has said it plans to issue formal guidance on the extension in the coming days.

An extension, especially if it only applies to a narrow set of returns, doesn’t always provide accountants with more time.

Many states haven’t yet said whether they’ll extend their tax deadlines to match the new federal due date, and professionals typically have to prepare most of a person’s federal taxes before they can prepare the state tax return.

Similarly, many people with estimated tax payments still due April 15 will base those payments on their prior year’s taxes—all meaning preparers may end up doing most of the work on clients’ 2020 federal income tax returns by the original due date anyway, Harlow said.

Extending also sometimes just means people delay getting documents to their tax preparers, leaving accountants just as slammed at the end of the season, said Michael Eisenberg, a CPA with Baker Tilly in Encino, Calif.

“Last year was just unbelievably difficult,” Eisenberg said, referring to three-month extension to July 15. This year people have been better about submitting documents earlier, he said, noting that the big frustration now is understanding how to apply the recently-enacted Covid-19 relief measures.

The IRS still needs to issue substantive guidance, including on the unemployment compensation tax relief, which affects the returns people are currently filing, said Josh Lance, a CPA and managing director at Lance CPA Group.

“Right now it’s basically left for everyone to speculate and guess as to how they handle treatment of some of these things, and that’s frustrating,” he said. “You have to give CPAs and tax preparers time to digest that stuff and work with clients on that.”

The lack of guidance is a “huge issue,” said Jan Lewis, a tax member of Jackson, Mississippi-based Haddox Reid Eubank Betts PLLC. CPAs need time to update their software while at the same time try to advise clients about what to do.

Rettig said Thursday that the IRS believes it can create a procedure for people to receive the unemployment compensation tax benefits without having to amend their returns. The agency hopes to be able to announce that in the near future, he said at a congressional hearing.

Joint tax returns, involving married couples in which one or both of the spouses has received unemployment income, have created some complications, but the IRS expects to work through those, Rettig said.

—With assistance from Michael Rapoport, Lydia O’Neal, and David Hood.