The Senate is set to come back, while the rising case load in D.C. kept the House from returning. The IRS has brought back thousands of employees, and continues to issue relief payments. And states are facing major revenue struggles.

Catch up on how the virus continued to change the tax landscape this week.

The IRS delivered a blow to businesses with loans under the Paycheck Protection Program Thursday when it announced that companies won’t be able to deduct wages or expenses they paid for using the relief money. That’s a serious hit for companies counting on being able to reduce their taxable income in tough economic times.

The IRS said in the guidance that the decision “prevents a double tax benefit” since the forgiven loans aren’t included in taxable income. The third stimulus law (Public Law 116-136) that created the program, meant to help businesses retain their employees through the crisis, didn’t address it.

Lawmakers may address that decision in future legislation.

“We are planning to fix this in the next piece of response legislation,” a spokesperson for House Ways and Means Committee Chairman Richard Neal (D-Mass.) said Friday. Senate Finance Committee Chairman Chuck Grassley (R-Iowa) has expressed disappointment with the agency’s position, but hasn’t announced his plans.

The IRS brought businesses much of the clarity they need to proceed with claiming the employee retention credit worth up to $5,000 per employee when it issued a slew of FAQs. But the agency split with the Joint Committee on Taxation on one provision: The IRS said employers can’t claim the credit for health care expenses they continue to pay on behalf of employees if they aren’t paying any other wages, while the JCT said the IRS could take the opposite stance.

FAQs aren’t binding, but the IRS will use them sometimes when it needs to quickly get out instruction to taxpayers.

Robert Delgado, a benefits tax principal at KPMG LLP, is advising clients listen to the IRS position, since the agency has enforcement power and the JCT doesn’t.

The U.S. Chamber of Commerce on Friday urged the agency to reconsider.

Relief Option for Some Banks

Only about 20 banks nationwide have made use of a provision in the third virus law that says they can delay a new accounting standard—the current expected credit losses (CECL) standard—until the end of the year or until the national emergency is declared over.

Smaller, publicly traded institutions are the ones that have opted for the extra time. Some said the change was too complex in an already uncertain time. Others said they want more time to assess the economic fallout from the pandemic. 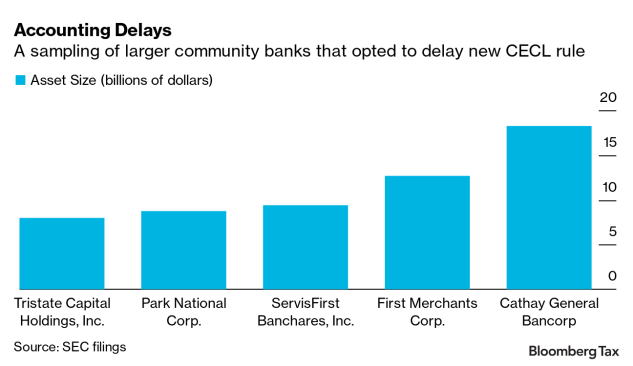 The Senate is set to return on Monday, although the House won’t be coming back just yet. Initial talks are underway about the next phase of virus relief, the fifth package since the crisis began.

Ways and Means lawmakers have already made the case to Treasury Secretary Steven Mnuchin for certain changes. Mnuchin will be a key negotiator in the next phase of relief.

The package is expected to be quite expansive. States and cities are seeking as much as $1 trillion in aid, House Speaker Nancy Pelosi (D-Calif.) said Thursday.

Read this summary for more on the various phases of virus relief.

Treasury plans to use prepaid credit cards to get relief payments to individuals who are hard to reach otherwise, according to sources familiar.

The deal is with Meta Financial Group Inc.'s Metabank and Fiserv Inc. The plan is to scale up an existing product offered by the companies for federal agency payments, known as the U.S. Debit Card.

The $1,200 payments are a signature element of the government’s coronavirus response.

Nonprofits could benefit from a provision in the third virus law that allows them to carry back losses to profitable years and lower their taxable income. But the IRS didn’t fully address the issue in recent guidance, leaving nonprofits with questions at an already difficult time.

The agency plans to release more guidance on the issue.

“I would worry that the guidance won’t be forthcoming and it will leave a lot of nonprofits in the balance,” said Lloyd Hitoshi Mayer, a professor at University of Notre Dame Law School. “This is real dollars on the table; it’s going to cause another dilemma that Treasury could easily resolve.”

Register here for a May 5 Bloomberg Tax webinar on how coronavirus is impacting tax planning.

The IRS called back about 10,000 employees, and has been working on gathering masks and gloves to protect them.

The agency’s decision sparked criticism from Democratic lawmakers and the National Treasury Employees Union, which represents IRS employees, as well as those at other federal agencies.

Private Letter Rulings: Requests for the IRS to weigh in on a company’s specific tax situation can now be sent electronically.

Get up to date on federal and state responses to the virus.

Tax Havens: A growing number of European countries plan to exclude companies based in tax havens when dishing out relief. But experts say that virtue signaling isn’t going to be as effective as just making clear that there is a quid pro quo to receiving a bailout.

Confusion: The value-added tax relief countries have been giving companies is creating confusion. Companies as a result must scramble to meet conflicting deadlines and keep track of a range of requirements.

The Federal Reserve on Thursday announced an exception that will mean S corporations and other pass-through entities can access emergency loans.

The change was one of several the Fed announced as it doubled the revenue limit and raised the employee limit by 50% to widen access to the program. Businesses with up to 15,000 employees or up to $5 billion in annual revenue will now be able to access loans.

In contrast to the Paycheck Protection Program to help small businesses, the emergency loans must be paid back. PPP loans can be forgiven if firms comply with requirements.

Sports betting is now legal in Colorado, but there are no major live sporting events and the state’s casinos are closed.

That means the expected tax revenue is now a sliver of the projected potential. A pre-election analysis of the proposition by the Colorado Legislative Council projected the tax, assessed on net betting proceeds, would generate annual revenue of about $16 million in its first five years, up to a maximum of $29 million a year.

Those projections were later reduced, but what will come in now is expected to still be far lower.

“All the things going on right now have completely thrown any of these predictions out the window,” Dan Hartman, director of the Division of Gaming, said.

That funding decline is also bad news for water projects.

No Bailout: Mnuchin this week said that states with poorly managed budgets before the crisis shouldn’t count on the federal government to save them.

President Donald Trump and Senate Majority Leader Mitch McConnell (R-Ky.) have made similar arguments, with McConnell suggesting states with large pension obligations under union contracts use bankruptcy as a way to manage shortfalls.

On the latest episode of our Talking Tax podcast, Kate Barton, the global vice chair of tax at EY, says companies should be expecting an inevitable series of tax hikes that will be needed to pay for all the virus relief. Listen here.

Bloomberg Tax contributor Kelly Phillips Erb writes this week about why it’s so important to have a written lease agreement. It’s particularly important in the context of the Paycheck Protection Program, which has made hundreds of billions of dollars of government-backed forgivable loans available to small businesses.

“It can be used not only to justify tax deductions, but also to substantiate costs for loans (not only special loans like the PPP but existing loans like EIDL and conventional bank loans). And on the lessor side, it can offer proof of income,” she writes.

(Updates to add section on FAQs in ninth paragraph.)

To contact the reporter on this story: in Washington at cmurphy@bloombergtax.com