State legislatures are poised to take up digital tax proposals in 2020, which could mean higher tax bills for tech titans.
Photo by MANAN VATSYAYANA/AFP via Getty Images

Taxing features of the digital economy will be a high priority in many states next year with legislatures expected to modernize their tax codes and capture new revenue to replenish their pandemic-wounded budgets.

Lawmakers are preparing to file bills from Florida to Washington, patching up holes in their tax systems that prevent levies on e-commerce, online marketplaces, and streaming services. And some states, including Maryland and New York, could make history by enacting the first laws capturing a slice of the digital advertising revenue collected by social media, search engine, and streaming services companies.

The spate of proposals could mean higher tax bills for tech titans Amazon, Apple, Facebook, Google, Microsoft, and Netflix, in addition to the millions of consumers using their services.

Agencies will next year push more to tax tech companies “in ways that achieve parity with the traditional goods and services economy,” said Carl Davis, director of research at the Institute on Taxation and Economic Policy. “The sales tax laws are generally lagging behind,” he said.

Covid-19 revenue losses have forced states to seek new revenue sources. The hard shift to online shopping and streaming services, exacerbated by the pandemic, has revealed how existing tax systems leave out swaths of the digital economy.

The path won’t be easy because digital products and services don’t fit neatly into existing state tax structures. To capture the revenue potential from streaming services, digitally delivered software, and online advertising, states must be patient, thorough, and willing to defend their strategies against legal challenges from the digital behemoths, according to tax administrators and lobbyists interviewed.

“New business models are called economic disrupters for a reason, they’re disruptive,” said Verenda Smith, deputy director of the Federation of Tax Administrators. “They’re young and fluid, and existing tax structures are absolute and hardly nimble. That’s a recipe for unhappiness and complaints.” 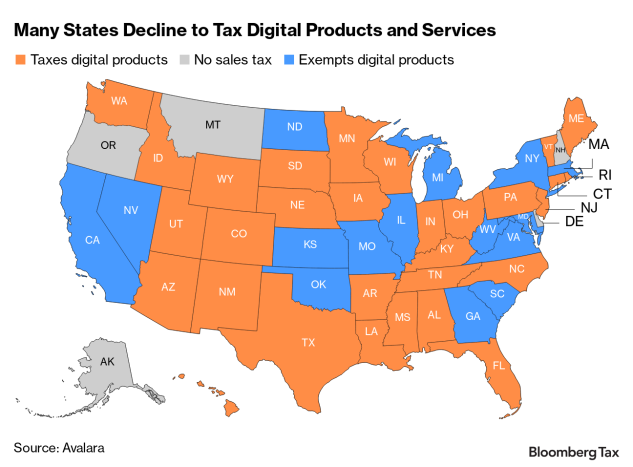 States and municipalities may choose to overhaul their sales tax codes to go after revenue from digital goods and services, particularly as jurisdictions incur tax and fee losses resulting from consumers cutting the cord on traditional entertainment platforms, said Steve Lacoff, general manager for communications taxes at Avalara. States and municipalities are “poor” and continue to “lose money at an accelerating pace due to cord cutting” from cable companies, Lacoff said. He noted some states have recently sued Netflix, Hulu, and other streaming entertainment companies to collect unpaid local utility franchise fees.

The shift could be as prominent as the taxation changes states enacted following the 2018 U.S. Supreme Court ruling in South Dakota v. Wayfair, Lacoff said. The groundbreaking 2018 decision allowed states to impose tax collection duties on remote e-commerce retailers based on economic activity in a state rather than physical presence.

Most tax codes were crafted to tax tangible personal property, leaving digital versions of books, records, movies, software, and games untaxed. Thirty states and the District of Columbia have expanded their tax bases to include some digital products, but 20 states don’t tax any online products.

“Differing versions of this type of legislation addressing digital goods and services have been proposed over the last several years and I would expect something similar to again resurface during the upcoming 2021 legislative session,” said Jonathan Feldman, a tax partner in the Atlanta offices of Eversheds Sutherland LLP.

Maryland could be the first state to address the taxation gap as Democrats, with a veto-proof majority in the state legislature, try to override Gov. Larry Hogan’s (R) veto of H.B. 932, said Delegate Eric G. Luedtke (D). The bill would apply the 6% sales and use tax to digital products, such as music and e-books.

Other states where action is possible include Georgia and Missouri.

In Georgia, H.B. 1056 would apply state sales tax to most digital products. The bill didn’t advance this year due to a shortened legislative session, but the change could generate $100 million for the state and $83 million for municipalities beginning in 2022, according to analysis by Georgia State University.

A Missouri bill, H.B 244, would bring the state into compliance with the Wayfair principles and require sellers to collect taxes on digital goods and services. The measure was prefiled for potential action during the 2021 legislative session.

States are also eyeing the $124.6 billion earned last year by search engine, social media, and streaming companies from online advertisements. And, as much as $14 billion annually is lost because of state tax codes that leave revenue from online ads untaxed, estimates University of Tennessee economist Bill Fox.

“No state that I know of has a digital advertising tax or a digital services tax that is like the ones being proposed in a good handful of states,” said Charles Maniace, vice president of regulatory analysis at the tax software company Sovos. Digital ads are “an untapped source” of revenue, he said

Maryland, New York, Nebraska, West Virginia, Washington, and the District of Columbia all considered bills this year that either bring digital advertising into the sales tax code or impose a gross receipts tax on the revenue of large tech companies.

Maryland made the greatest progress, passing a bill (H.B. 732) taxing the gross receipts of tech companies earning more than $100 million annually. Hogan vetoed this measure as well, but Leudtke said it passed by veto-proof majorities and would likely be overridden early next year just like H.B. 932.

Taxes on digital advertising still have a difficult path ahead. The strategy could face challenges on constitutional grounds, legal scholars say. It also faces immense opposition from the tech industry, which has vigorously opposed digital advertising taxes in state capitols across the country. Google’s chief of state legislative affairs Ron Barnes emphasized the legal issues in a letter to the Maryland legislature, pointing to potential violations of the Permanent Internet Tax Freedom Act and the commerce clause of the Constitution.

“There are enormous political obstacles to enacting any of these things because you’re talking about taxing the sources of the most concentrated wealth and power in the country,” said Dan Bucks, former director of the Multistate Tax Commission.