The Internal Revenue Service has been trying to connect with younger taxpayers on Instagram. The account is a mix of pop culture references, colorful graphics, and tax-filing reminders.
Illustration: Jonathan Hurtarte/Bloomberg

Most children are embarrassed by their parents’ use of social media.

But a long-serving IRS employee overseeing the agency’s new Instagram account says the page has impressed even his 20-year-old daughter.

From “Game of Thrones” and “Star Wars” references to cartoonish monster illustrations, the account is a whole new look for a government agency not usually known for its sense of humor.

The Internal Revenue Service may be able to use the medium—a departure from some of its more complex forms of communication, such as tax guidance and filing instructions—to expand its reach beyond the tax practitioners it typically works with.

“They’re really leaning into being weird and making bad puns,” said Stephanie Meyers, group director of digital growth for Inc. and Fast Company magazines. “And they’re so committed to it that I look forward to seeing them in my Instagram feed every day.”

The agency has been distributing information on social media platforms for about 10 years, said Terry Lemons, chief of communications and liaison at the IRS. Before joining Instagram, the agency already had accounts on YouTube, Facebook, and LinkedIn.

“Instagram, for us, was a really interesting platform, because it’s more of a visual platform,” Lemons said. “And it was a way where we could try reaching different audiences with different images and different concepts that we hadn’t done before.”

The agency’s posts, which include an array of impressive moving graphics, are conceived and developed in-house by the IRS’s social media team.

Outside of staffing costs, the agency pays for one subscription to stock photos it can use across all of its social media platforms, said Sara Eguren, the IRS’s social media chief and a 14-year veteran of the agency.

The graphics are often developed through a trial-and-error process in which the team experiments with concepts and techniques picked up by watching videos online, Eguren said.

This work is done on a tight budget with limited staff. Almost all social media work is conducted by nine employees, with two or three working on the Instagram account at any given time. Employees split their time between curating the accounts and performing other tasks.

The IRS has just over 8,000 Instagram followers and recorded about 660,000 “impressions” from late November through the end of May, Eguren said.

“But we have high hopes,” she said, noting that the account is only a few months old. Impressions measure the number of times users saw a post or story. 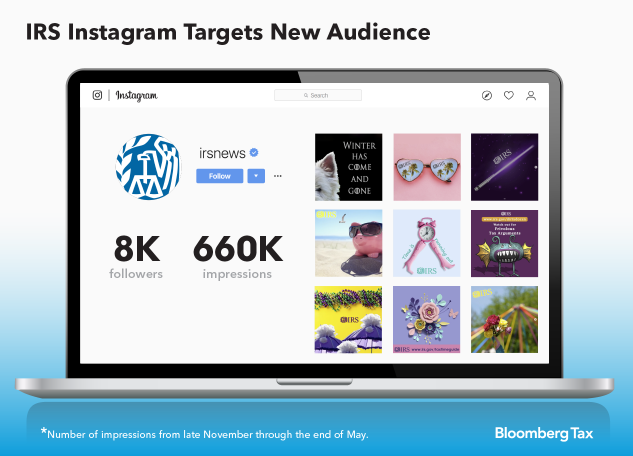 Meyers said she is “weirdly obsessed” with the account’s mixture of puns and constantly changing themes.

The IRS’s strategy isn’t necessarily one that everyone should copy, “but it’s working for them in the sense that everyone I tell about the account—which is a number of people—thinks it’s hilarious and starts following it,” she said.

Meyers does, however, wonder if the IRS is succeeding in conveying its intended message on Instagram or changing the behavior of its followers. One problem is that the agency embeds links directly into its images, which means they can’t be clicked on or copied and pasted into a web browser, she said.

Instagram doesn’t permit users to include clickable links in their posts unless they pay for them. To get around this, many organizations will add a link in the bio section of their profile that sends users to a replica Instagram feed that includes clickable links.

Blaise Grimes-Viort, chief services officer at The Social Element, a global social media agency, said he found the account to be a little confusing because the posts lack an overarching theme.

“It appears to me that they’re trying, which is the most important thing,” he said. “They need to experiment with this.”

Some of the agency’s posts from March—a series of monsters advising people to be wary of tax crimes and an image of a cat with “we’re hiring now” text—convey a clear message, compared with more generic images, said Grimes-Viort, who is based in London. The unique illustrations and inclusion of text in those posts give users a sense of what the IRS is trying to say before they even click on the image, he said.

Feedback from people like Lemons’ daughter can help the IRS gauge whether it is effectively reaching one of its most sought-after demographics under the new campaign: young adults who are just entering the workforce and are most in need of the agency’s tax preparation and filing tips, he said.

Instagram, one of the fastest-growing social media platforms, announced in June 2018 that it surpassed 1 billion active users.

And because the platform is especially attractive to younger demographics, using it “is an effective strategy for organizations and institutions like the IRS to be able to connect with a younger clientele,” said Marcus Messner, associate director of the Richard T. Robertson School of Media and Culture at Virginia Commonwealth University.

Eguren said the IRS constantly has to monitor its tone on Instagram to ensure it’s not offending or alienating users.

“It’s hard to balance some things that are very serious to people, for example, ‘I can’t pay my taxes right now,’ with an image that can be fun and friendly,” she said. “So finding that right balance is a challenge every time.”

Another challenge for the IRS’s account is the lack of user interaction.

“Many organizations use social media as a one-way communication channel, meaning they just post their messages and do not actively connect with other users or interact with them,” Messner said. “That can negatively impact their success on social media as they are trying to grow their communities.”

The IRS restricts users’ ability to leave comments on its posts, and the agency doesn’t respond to direct messages. The agency’s reasoning is two-fold. It doesn’t want to encourage the sharing of personal and sensitive information over social media, and it doesn’t have the staff to regularly respond to messages, Eguren said.

It’s OK for organizations to use social media to showcase information rather than interact with users, but the agency should note that it is a one-way channel in the description at the top of its Instagram page, Grimes-Viort said.

Currently, “there is no indication that I’m really just shouting at a wall,” he said. “That is going to lead to frustration.”

Tax preparers, individual taxpayers, and state revenue departments are among those following the agency’s account.

State departments will often piggyback off the IRS’s social media posts as a way to provide consistent messaging about combating identity theft and other forms of tax fraud, said Courtney Kay-Decker, an attorney and former director of the Iowa Revenue Department.

Those actions have been driven primarily by the Security Summit—a collective that includes the IRS, state tax agencies, and representatives from the private sector—which convened for the first time in 2015.

“There was this urgent need for those groups to communicate with each other,” Kay-Decker said.

But as the Security Summit evolved, “it became clear that we also needed to be, as a collective, communicating better with all of our constituencies, including taxpayers and their practitioners,” she said.

One way to do this through social media is to have state revenue departments and the IRS use the same words and visuals to convey messages about potential criminal activity, she said. That increases the odds that a message with click with taxpayers or their advisers and prompt them to change their behavior, Kay-Decker said.

Allyson Versprille
Reporter
Tired of Waiting on Hold With the IRS? You May Soon Be In Luck
IRS Would Need Big Funding Boost for IT Modernization Plan