The U.S. has spent more than half of $3 trillion in economic rescue funds passed by Congress -- with little of the oversight intended to ensure the money goes to the right places.

Some of the oversight bodies are barely functional: A special inspector general was only recently sworn in, a congressional panel still lacks a chairman and staff, and President quickly removed the official who was going to lead a separate accountability committee.

At the same time, about $2 trillion in stimulus money has already been distributed, according to an estimate from the Committee for a Responsible Federal Budget, a nonpartisan group focused on fiscal policy.

The sheer size of the pandemic response means there’s a wide swath of issues to investigate. But mistrust in Washington is so deep that the oversight groups’ investigations are already mired in politics. Leaders of both parties have failed to agree on a chairman to lead the . And Democrats are already voicing concerns on whether Trump’s hand-picked special inspector general for the stimulus can be independent from his former boss.

While the U.S. Chamber of Commerce frets that lawmakers’ oversight will be tainted by politics, Democrats such as Senator of Massachusetts, an advocate of the watchdogs’ role, say the cash is already flowing to undeserving recipients. 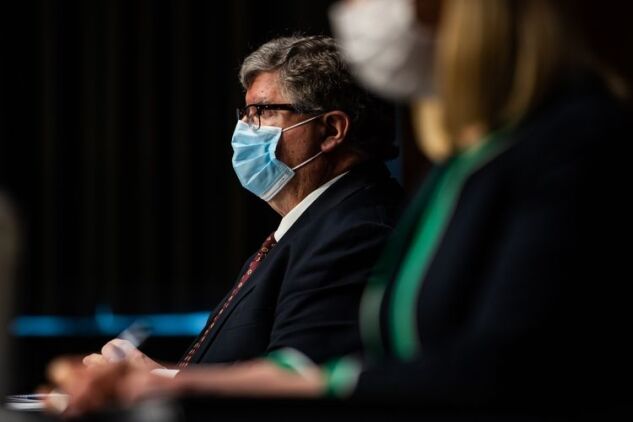 The legislation passed by Congress is worth about $3 trillion over a decade, though some of the cost would be recouped in later years so the amount of money going into the economy now will be closer to $4 trillion, according to the Committee for a Responsible Federal Budget.

One of the key oversight figures is , the former White House lawyer chosen by Trump and sworn in June 5 as special inspector general for pandemic recovery. Democrats are deeply skeptical about how he’ll perform.

of Ohio, the top Democrat on the Senate Banking Committee, said Miller had been “evasive” and “unwilling to condemn” Trump for removing several agency inspectors general when he testified in front of the Senate panel. Brown and Senate Minority Leader sent Miller a letter on Tuesday saying they were concerned he couldn’t be independent from Trump.

Miller must convince Democrats and the Trump administration that he’s tough, fair, and someone they should pay attention to, said , the first special inspector general who oversaw the Troubled Asset Relief Program, or TARP, amid the 2008 financial crisis. He said Miller’s most important chance to prove his independence will be his first public report, due in August.

“Your first report is to amplify what you’ve found. That really defined what we would be,” Barofsky said. “There is always going to be tension between a good IG and the agency.”

Congress’s economic rescue plan, enacted in four bills during March and April, is circulating money into the economy that came to a near-standstill during the coronavirus lockdowns. The measures provide forgivable loans to small businesses, stimulus checks for individuals, expanded unemployment benefits, payments for health care providers, and money for the Federal Reserve to leverage and lend to businesses.

Some business leaders are wary that lawmakers will be politically motivated in their approach to oversight.

“There’s already growing concern that congressional oversight will in part focus on companies or sectors that various elected officials will view as unworthy of assistance, irrespective of whether they qualify under the terms of the programs in question,” Neil Bradley, chief policy officer at the Chamber of Commerce, said earlier this month at a hearing of a separate accountability committee made up of federal agency watchdogs.

The Congressional Oversight Commission is designed to be bipartisan, with two members already chosen by Republicans, two picked by Democrats, and a chairman still to be named jointly by House Speaker and Senate Majority Leader .

Pelosi and McConnell have been unable to agree on the chairman for more than a month. Pelosi said last Thursday a choice would be announced “very soon,” though she also said the same thing in previous weeks.

The congressional panel has published one report so far, mostly laying out targets for future work, and has another due Wednesday. But without a chairman or funds to hire staff, the group has largely been unable to focus on oversight, according to people familiar with the matter.

An earlier congressional oversight panel, during the response to the 2008 financial crisis, took at least several months to begin running smoothly, said , a member of the panel led by Warren before she became a senator. That panel ceased operating in 2011.

“There is no such thing as nonpartisan. It’s an inherent challenge of that type of work,” said Troske, now an economics professor at the University of Kentucky.

The third major oversight body -- the Pandemic Response Accountability Committee made up of federal agency inspectors general -- got a jolt in early April when Trump ousted , the who had been cast to lead it. It was the first of Trump’s five dismissals of inspectors general he considered insufficiently loyal.

“I am very concerned that it will have a chilling effect,” said , who has served as deputy inspector general and acting inspector general at the Justice Department. “I don’t think the firings are going to scare most IGs. They will do their jobs, but he can pick them off one by one.”

The watchdog panel, known as PRAC, has started dozen of audits and investigations and has begun to publish initial findings about problems with the Paycheck Protection Program’s distribution of small business loans and potential fraud related to unemployment benefits.

However, the Trump administration’s stance could keep the panel from getting much of the information Congress said must be made public. The law says recipients of at least $150,000 in stimulus money should report details on how they spent the money.

The watchdog panel said in a letter to the House Oversight and Government Reform Committee that a legal opinion from Treasury Department’s Office of General Counsel and concurred with by Office of Management and Budget would keep PRAC from getting the “the breadth and depth” of data needed to oversee the “full range of programs” it’s supposed to study. OMB said in a statement it is working the PRAC and agency inspectors general to ensure proper reporting and transparency.

The Government Accountability Office also has been auditing stimulus spending, but it has been to get Treasury Department data about hundreds of billions of dollars of small business loans for a report due by the end of the month.

The inspectors general dismissed by Trump include those at the departments of State, Defense, Transportation and Health and Human Services. That has raised concerns from both parties in Congress that there may be more firings.

“Inspector general is a really weird job,” Barofsky said. “It’s one of the only jobs where you serve at pleasure of the president, but part of the job description is to cause displeasure.”

To contact the editor responsible for this story:
at jsobczyk@bloomberg.net