Lawmakers are starting to negotiate the next virus relief bill, with the Senate already back in Washington.
Photographer: Andrew Harrer/Bloomberg via Getty Images

President Donald Trump’s ideas for more pandemic relief—especially his insistence on a payroll tax holiday—aren’t winners so far in Congress, where Democrats and Republicans stand ready to fill the void with their own ideas.

Key lawmakers and the administration enter the third month of the Covid-19 crisis far apart on broad strokes for another giant aid package, and possibly even whether a fourth piece of legislation is necessary in the coming weeks.

Still, a host of proposals stand ready for the negotiating table. A major question remains whether a next package will focus on attempting to preserve pre-crisis status quo for businesses and workers, or rebuilding for the recovery.

“Everyone is trying to hang their ornament on the phase four Christmas tree, but it’s still not clear if we’ll even have a Christmas tree,” said Isaac Boltansky, director of policy research for Compass Point, an investment bank. “There are so many asks but legislative will to act is still murky at this point.”

The next bill will likely be “mostly about keeping the economy alive” during the Covid-19 disruption, said Rohit Kumar, a former deputy chief of staff to Senate Majority Leader Mitch McConnell (R-Ky.) and currently a principal with PwC LLP.

So far, Trump’s informal proposals—including a payroll tax holiday and capital gains tax cut—aren’t gaining traction. He has also suggested restoring the deduction for business-related entertainment that was eliminated by the 2017 tax overhaul and restoring a full deduction for business meals. Trump’s top economic adviser, Larry Kudlow, has suggested expanding bonus depreciation, which could include extending it to structures or pushing back the phase-down that begins after 2022.

The absence of a seasoned tax policy aide at the White House since the departure of former White House Director of Legislative Affairs Shahira Knight, and the lack of fleshed out proposals from the White House, give lawmakers more blank space to fill with their own proposals.

Some Republicans, including Senate Finance Committee Chairman Chuck Grassley (R-Iowa), have urged a broader wait-and-see approach toward more aid until they understand more about which programs from the previous packages work. Not all of the Federal Reserve’s massive lending facilities have kicked in yet, and industries only recently received clarification from the IRS on the employee retention tax credit.

Republican members of the House Ways and Means Committee are tinkering with a proposal to shift some of the temporary $600 increase in unemployment benefits provided by the relief law known as the CARES Act (Public Law 116-136) toward an incentive for people to return to work, likely to be timed over the summer.

The move could respond to complaints that low-wage employees can earn more by staying at home on the temporary benefit.

They are also discussing more tax breaks for businesses to mitigate costs associated with protecting employees and customers, and an expansion of the research and development credit. But even if fully fleshed out, those ideas will require buy in from the White House or Democrats.

House Democratic leaders say they will push forward with their own relief priorities next week, but that legislation will be just an opening bid in bicameral negotiations.

Democrats have expressed openness to another round of direct economic impact payments for individuals, with some growing support for a version of the program for small businesses after mounting frustration with the Paycheck Protection Program (PPP) and other small business aid initiatives created by the CARES Act.

Senate Finance Committee ranking member Ron Wyden (D-Ore.) and others view that as a way to supplement existing programs from March’s relief law. Wyden told Bloomberg Tax in April that he viewed the IRS’s refund and rebate system as a more efficient way to deliver emergency cash to businesses than the emergency loans directed by the Small Business Administration through banks, the rationale being that the IRS would already have information on business income, payroll, and identity through the normal tax filing process.

But that would also come with a hefty price tag, on top of money already spend bailing out main street businesses.

“I’m not sure what kind of political appetite there’s going to be for providing something like that,” Kumar said. “How quickly could you actually get those checks out the door?”

A recent IRS decision not to allow deductions for utilities, rent, and other normally deductible expenses the Paycheck Protection Program loans subsidize could provide ground for agreement on at least one provision of a future bill. On Wednesday a bipartisan group of lawmakers introduced legislation to undo recent IRS guidance and allow businesses to deduct expenses that they were required to pay under PPP, the original congressional intent.

Business groups and lobbyists also hope to add more targeted benefits to specific industries, including a holiday on alcohol excise taxes, an extension of the number of years businesses can count previous losses against the taxes they owe in the near future, and adjustment of international rules put in place by the 2017 tax law to let multinationals use those so-called carrybacks to the fullest extent possible. 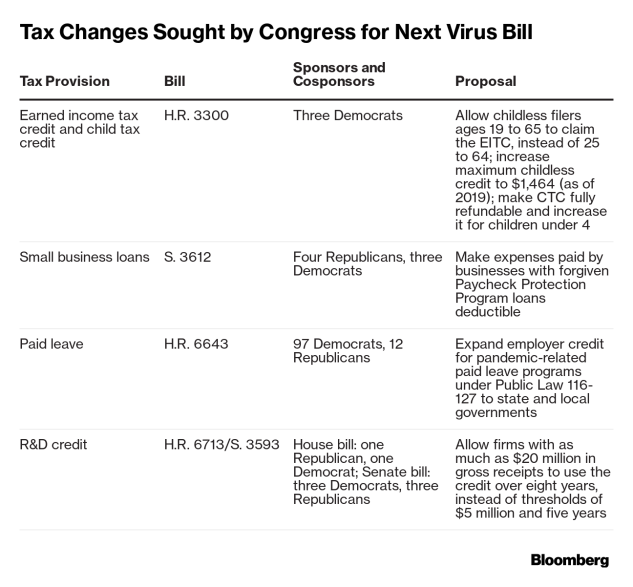