Senate Republicans and the Trump administration are struggling to reach a consensus on the contours of another stimulus plan, putting at risk the White House goal of enacting a package by the end of next week.

Treasury Secretary and White Chief of Staff are returning to the Capitol Wednesday after an initial round of talks with Senate Republicans ended without a clear outline or any lessening of GOP resistance to President ’s desire for a payroll tax holiday. 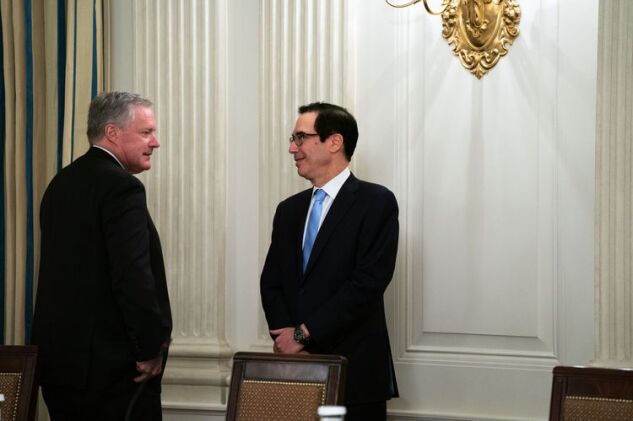 Mnuchin and Meadows also met Tuesday with House Speaker and Senate Minority Leader . But the two Democrats said there can be no real negotiations on virus relief legislation that can pass the House and Senate until Republicans can agree on their own plan.

Meadows conceded that there was some distance to go before trying to bridge the gap between the roughly $1 trillion plan Republicans are trying to craft and the $3.5 trillion that Democrats have on the table.

“We are in substantial ways apart right now,” Meadows said after meeting with Pelosi and Schumer. “I think they’re waiting for legislative text that I don’t see them getting for a little bit of time.”

Trump was optimistic a deal will eventually emerge.

“We’re making a lot of progress,” he said at a White House briefing on Tuesday evening. “I also know that both sides want to get it done.”

The White House and Congress have only a few weeks to come up with another stimulus before lawmakers take a scheduled August break and the $2.9 trillion flood of federal money passed by Congress earlier in the year begins to dry up. The resurgence of the coronavirus across the county threatens to keep the economy hobbled through the November election that will determine control of the White House and Congress.

Senate Majority Leader on Tuesday outlined some of his own priorities: Extension of a loan program for small businesses, another round of direct payments to individuals, money to help schools reopen and temporary liability limits for business and other organizations. Except for the liability limits, Democrats are likely to go along with the other provisions, though there is sure to be disagreement on the amounts allocated.

Both parties also support extending supplemental unemployment benefits. Some Republicans have floated the idea of structuring it so that unemployment insurance replaces 70% to 75% of previous wages rather than the flat $600 per week boost to state benefits in the last stimulus. But others, including Finance Committee Chairman of Iowa, have insisted that the solution has to be simple enough for the states to easily implement.

House Majority Leader Tuesday indicated that Democrats would be willing to compromise on the amount.

There’s also support for funding for coronavirus testing and vaccines.

McConnell said he would introduce a bill in the next few days to begin negotiations with Democrats, even if some Republicans don’t like it. He said he expected “most” GOP senators would agree with it.

Mnuchin insisted that his goal remained getting stimulus legislation passed by the end of next week, though given the differences with Democrats and among Republicans mean that deadline is likely to slip.

A stumbling block for Republicans is Trump’s insistence on cutting or suspending the payroll tax paid by employers and employees, which finance Social Security and Medicare. Trump has suggested he’d reject any legislation without the tax cut, but it’s not clear how far he’s willing to push.

Mnuchin said it would be included in the Republican proposal, but some GOP senators, such as South Dakota’s , said they remain skeptical.

“If it’s a choice between doing checks and payroll tax cut, I think it’s pretty clear the checks actually have a more direct benefit to the economy,” Thune, the second-ranking GOP senator, said.

McConnell has been non-committal, saying only that its still a matter of discussions with the administration.