President said he’ll ask Congress to pass more economic stimulus, including a payroll tax cut, even after the government reported a in U.S. unemployment on Friday.

“We’ll be going for a payroll tax cut, we think that’ll be incredible in terms of what we’re doing because again we’re going to be bigger, stronger, better than we ever were,” Trump said in at the White House to celebrate the jobs report. 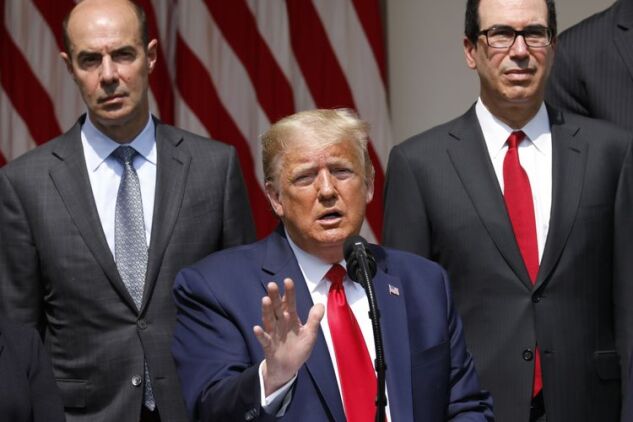 “We’ll be asking for additional stimulus money because once we get this going it’ll be far bigger and far better than we’ve ever seen in this country, that includes as of three or for months ago,” he said.

House Democrats passed an additional $3.5 trillion stimulus bill last month, aimed largely at assisting states and hospitals battered by the coronavirus outbreak. But Republicans controlling the Senate have rejected that proposal and plan to wait until late July before considering their own alternative.

A Senate Republican aide said that Friday’s jobs report shows that any future relief bill should be limited and focused on steps to get the economy re-opened, rather than on the stimulus spending proposed by Democrats. Trump administration officials increasingly expect to spend up to $1 trillion on the next round of relief, a figure that is said to have the backing of Senate Majority Leader .

“As Senate Republicans have made clear for weeks, future efforts must be laser-focused on helping schools reopen safely in the fall, helping American workers continue to get back on the job, and helping employers reopen and grow,” McConnell said in a statement. He dismissed the Democrats’ plan as “left-wing policies that would make rehiring even harder and recovery even more challenging.”

The Bureau of Labor Statistics reported Friday that the U.S. added 2.5 million jobs in May, lowering the unemployment rate to 13.3 percent. Economists surveyed by Bloomberg expected 7.5 million more jobs to be lost, on average, with the unemployment rate rising to 19%. Administration officials in recent weeks that the jobless figure could peak in May over 20%.

Economist , an informal adviser to Trump, said the jobs numbers “negate the need for any kind of additional federal lending or spending at this point.”

“The only thing I would advocate at this point is to do the payroll tax suspension for the rest of the year,” Moore said in an interview. Moore is a member of the Save Our Country Coalition, which advocates for fiscal restraint.

Democrats and many Republicans are skeptical of a payroll tax cut, which they note would do nothing for Americans currently out of work. Trump, who’s been promoting the idea for months, argues that it would encourage businesses to add employees.

“It’s going to be a tremendous incentive for businesses,” he said.

Payroll taxes -- the 6.2% levy on wage income up to $137,700 that finances Social Security -- are paid by the vast majority of American workers. Employers pay an additional 6.2% tax for their employees. But the millions of people who’ve lost their jobs wouldn’t get a direct benefit, and many economists question whether it would be enough to bolster consumer spending -- a prime driver of the economy -- and spur companies to begin rehiring.

, the chairman of the House Ways and Means Committee, said that despite the jobs report, the U.S. still needs to extend expanded unemployment insurance, which is due to run out at the end of July.

“An extraordinary number of Americans remain out of work, and the virus continues to plague our nation -- this extension is still sorely needed to strengthen our economy and ensure that people who are not yet able to return to work safely and are struggling can at least manage to afford essentials as the crisis persists,” Neal, a Massachusetts Democrac, said in an emailed statement.

But Texas Representative , the ranking Republican on the Ways and Means Committee, said that the expanded unemployment insurance could become a disincentive to workers returning to jobs because some would be taking in more money than they had when working. He and other Republicans favor giving workers a bonus for going back on the job.

“Rather than prematurely embrace more spending, we need to give our Main Street businesses the tools they need to survive and rebuild their workforce, and I believe a return-to-work bonus would ensure a faster economic recovery,” said Brady.

, the president’s top economic adviser, told Bloomberg Television on Friday that some sort of return-to-work cash incentive is a possibility. The administration has regularly been expressing concerns that people will decline to rejoin the workforce if unemployment benefits are too generous.

“We may reward the workforce for going back to work, we’re looking at a number of options on that score,” Kudlow said.

McConnell has said any new legislation must also include liability protection for businesses that open up against suits from customers and workers who might contract the virus.

Senate Republicans argued the jobs report justifies their wait-and-see approach to more stimulus as more data comes in on the recovery.

“The jobs report underscores why Congress should take a thoughtful approach and not rush to pass expensive legislation paid for with more debt before gaining a better understanding of the economic condition of the country,” said Michael Zona, a spokesman for Senate Finance Committee Chairman , an Iowa Republican.

“Chairman Grassley will work with his colleagues on any potential further coronavirus response legislation if it becomes necessary. It’s too early to say what that legislation might encompass,” Zona said. “It would need to address any ongoing problems in an effective manner and encourage further job growth.”