An electrical contractor repairs a sign with gasoline fuel prices above six and seven dollars a gallon at the Shell gas station at Fairfax and Olympic Blvd in Los Angeles on March 8, 2022.
Photographer: Patrick T. Fallon/AFP via Getty Images

U.S. governors from California to New York are proposing tax cuts, rebates and other forms of relief to drivers paying more than $4 a gallon to fill their gasoline tanks amid Russia’s war with Ukraine.

The average for a gallon of regular gasoline surged to a record of $4.25 as of March 8, up 59 cents in just a week, according to AAA. In California, where drivers pay some of the highest prices at the pump, the average has jumped to $5.57. That means filling up could cost as much as $100 or more for Americans already paying higher prices on household products such as food and cleaning supplies.

“Money saved at the pump translates into dollars back in consumers’ pockets for groceries, childcare, rent and more,” the six Democratic governors wrote in a letter to congressional leaders. 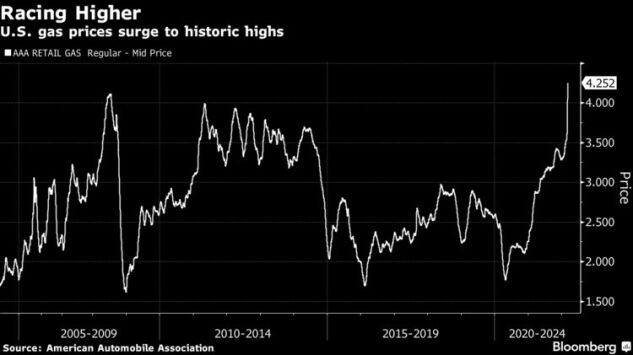 Crude prices to more than $130 this week, the highest since 2008, after the U.S. and the U.K. said they will ban Russian oil imports as President Vladimir Putin continues with his invasion of Ukraine.

In New York, where drivers are paying an average of $4.43 a gallon, Hochul said prices could reach $6. She said she has been speaking with her Division of Budget about the state’s gasoline tax, which is about 48 cents.

“I’m being very thoughtful about this,” Hochul said at an event Tuesday. “We can cut it, but if it’s going to be absorbed in the increases anyhow, then all we’ve done is hurt another part of our budget that we’re going to have to backfill money to make sure that we have it for roads and bridges and other important stuff.”

New Jersey Governor , meanwhile, cautioned that the state can do “not a lot” to bring down gasoline prices.

“We have a gas tax that’s set every August -- this August it went down over 8 cents. It’s subject to a formula,” the governor said on CNBC’s “Squawk Box” on Monday. “At the federal level I like the idea of a gas-tax holiday, at least for a period of time.”

Even if both federal and state taxes are eased, many consumers will be paying more. The average U.S. increase in the past week is more than the total of state and federal taxes on gasoline. Drivers paid an average 49 cents of state and federal taxes for every gallon of gasoline as of July 1, according to the U.S. Energy Information Administration.

“I don’t think there is much states can do to provide relief or should do. The fact is that oil is very expensive right now,” Severin Borenstein, a professor at the University of California, Berkeley, said in a phone interview. “Protecting consumers from high oil prices has a long history of failure, going back to the 70s and so what they can do is try to help the low income people in their states not just with high gas prices but with all the other things that have gotten expensive.”

That isn’t stopping officials from trying to help.

California’s Newsom, in his State of the State on Tuesday, said he would work with legislative leaders on “a proposal to put money back in Californians’ pockets to address rising gas prices.”

Newsom wants to offer a substantial tax rebate to California car owners to ease the pain of rising gas prices, but is still working out the details, administration officials said. 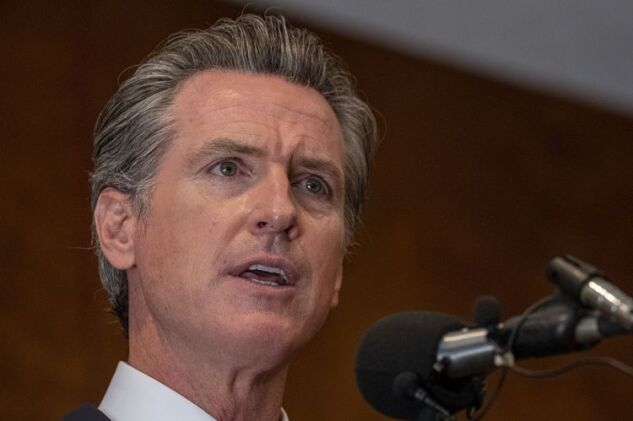 “You’ll have to be a California resident and you’ll have to own a car,” Dee Dee Myers, the governor’s senior advisor and director of the Office of Business and Economic Development, told reporters after his speech Tuesday. “It is a substantial amount of money.”

The two leaders of the state’s Democratic-majority legislature -- Senate President Pro Tempore and Assembly Speaker -- after the speech issued a joint statement suggesting that they are considering a tax rebate that’s broader than relief from fuel prices. That would draw from the general fund, which already is projected to have a $20.6 billion surplus that can be used for discretionary purposes.

Virginia’s new Republican Governor also is looking to give drivers tax relief. He has asked lawmakers to repeal the state’s grocery tax, provide one-time rebates and temporarily cut the state’s gas levy. Republicans control the Virginia House, while Democrats control the Senate. The state has more revenue than projected, he said.

“Facing the highest gas prices on record and the highest inflation rates in decades, families across Virginia are having to do more with their budgets,” Youngkin said in a March 9 op-ed in the Richmond Times-Dispatch. “The cost of living is going up, so taxes must come down.”

In Massachusetts, Republican lawmakers and candidates for governor proposed lifting the state’s 24-cents-a-gallon gas tax for a few weeks, at a moment when the legislature is already considering sweeping tax cuts proposed by Republican Governor Charlie Baker. The gas tax currently brings in about $65 million a month.

Baker tweeted on Tuesday that he thought Biden’s ban on Russian oil imports was “the right move” to punish Russia. He again pushed his own “series of tax cuts to help Massachusetts residents” with high prices, but did not mention the proposed gas tax relief.

In Michigan, GOP Senate Majority Leader Mike Shirkey and House Speaker Jason Wentworth said Republicans are planning to send a proposal to Governor next week to suspend the state’s 27 cents a gallon gasoline tax. Bobby Leddy, a Whitmer spokesman, said the governor also is urging the legislature to approve her proposal to eliminate the state’s retirement tax.

“Governor Whitmer is always working to lower costs and save drivers money,” Leddy said in an email. “Right now, the best way to bring down the price of gas without impacting our ability to fix the damn roads is by suspending the federal gas tax.”

In the top-oil producing state, Texas Republican Governor has suggested that burdensome regulation is preventing the energy industry from pumping more.

“Instead of begging other countries for oil, Biden can stop hindering the U.S. energy sector,” he said on Twitter. “Texas can easily produce enough oil to reduce gas prices if his administration would get out of the way. Don’t make us dependent on foreign sources of energy.”

To contact the reporter on this story:
in New York at swoodhouse15@bloomberg.net