An e-cigarette device user exhales vapor in San Francisco, where the board of supervisors voted June 25 to ban the sale of such products.
Photographer: David Paul Morris/Bloomberg

San Francisco—home to vaping brand Juul—has banned the sale of e-cigarettes, although cigarettes, other tobacco products, and recreational marijuana remain legal there.

While San Francisco’s move late last month isn’t about tax, it highlights the sometimes awkward situation states find themselves in as they seek to go after new revenue by taxing vaping products.

Taxes on vaping products are either aimed at liquid used in vape pens or apply to sales of vapor products like the pens themselves. The idea is appealing as cigarette sales—and revenue from cigarette taxes—fall. National cigarette sales dropped 41% between 2001 and 2017, according to data from the Federal Trade Commission.

Seventeen states have enacted a vaping tax, with several—Washington, New York, Connecticut—taking effect later this year. Maine could be added to the list, if the governor signs off on a recently passed bill. Numerous proposals are being negotiated in state legislatures, and some municipalities have also imposed their own measures. That trend isn’t likely to slow down.

“This year was a lot, but next year is going to be twice as bad,” said Lindsey Stroud, a state government relations manager at the Heartland Institute, which opposes the taxes.


The taxes vary in structure depending on the state. Some tax vapor fluid per milliliter, which gets tricky when products have different nicotine potency. Others set sales taxes at a percentage rate, and a few, like Pennsylvania, have imposed a one-time tax on all untaxed inventory.

Washington Rep. Gerry Pollet (D) said he was advised to choose a wholesale tax on retailers when purchasing from distributors rather than a per-milliliter rate. He blames pressure from lobbyists for ultimately getting lawmakers to change his proposal, which passed the House, to a tiered per-milliliter rate.

A per-milliliter tax is too easy to “game,” he said, because nicotine can be concentrated.

“I expect that we will have discussions about adjusting legislation next year,” Pollet said. “We have to because it was so rushed through.”

New York went the same route with its 20% sales tax on vapor products. The levy is estimated to generate $19 million in fiscal year 2021, according to Gov. Andrew Cuomo’s office.

“We were at least happy to see the New York State tax go through in a percentage form because that made it fair for everyone across the industry,” said Andrew Osborne, vice president of the New York State Vapor Association, a group that advocates against vaping taxes in the interest of vape shops. “In some other states they passed a per-milliliter mode, which, in reality, favors higher nicotine type products.”

Some states have taken steps to restructure their original vaping tax proposals, a sign that the taxes may continue to face challenges after legislatures pass them.

Kansas had passed a 20-cent-per-milliliter tax on vapor liquid in 2015. But before it could go into effect in 2017, representatives of the local vaping industry pushed for a 5-centper-milliliter tax, which lawmakers ultimately approved.

“To be perfectly honest, one of the reasons we see such a variance across the board in all these states is, it depends who has input at the table,” said Spencer Duncan, a lobbyist who represented members the local vaping industry in conversations with lawmakers. “Had we had not had some input in our legislature and had people who knew us already and had been on top of things, we would have a 20-cent tax in Kansas right now.” 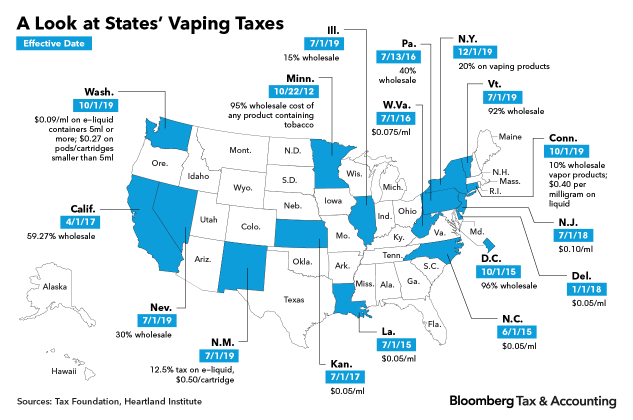 Vaping tax opponents say the the existence of the tax itself could push people back toward smoking.

One way to prevent that from happening is to ensure that vapor product taxes aren’t higher than taxes on cigarettes, said Jared Walczak, senior policy analyst at the Tax Foundation. Some states, like Illinois, packaged cigarette tax hikes with their vaping taxes.

Supporters of vaping taxes say the taxes could deter teenagers from turning to e-cigarettes. But those against vaping taxes would rather not see tax policy used to deter teens from smoking—they don’t think teens will take much notice of a tax, and the tax could discourage those who use vaping as a way to quit smoking cigarettes.

A vaping tax proposal failed in Colorado earlier this year, partly stemming from concerns the tax could target low-income populations and make vapor products less accessible to former smokers. The goal was to address the rise of youth use of e-cigarettes, said state Rep. Yadira Caraveo (D), who sponsored the bill.

There were also lobbying efforts against the bill. JUUL Labs Inc., which sells a popular vape pen that uses e-liquid pods, and its partial investor Altria Group, through subsidiary Altria Client Services, Inc.,sent lobbyists to oppose the legislation, according to Colorado lobbying disclosure reports.

“We believe in reasonable regulation, including on taxation, and want to work constructively with policymakers to implement commonsense tax policies,” a JUUL spokesman said.

There hasn’t been a decision on whether the same bill will be reintroduced next session. Already there is talk of taking a different approach to addressing youth vaping, Caraveo said.

“We definitely need to do something about vaping in youth,” Caraveo said. “Is a tax the right way to do it again or is there a different path?”

States are grappling with the intent behind vaping tax proposals, as they crave the revenue that such a levy could provide, said Mary Murphy, a project director in fiscal and economic policy and state fiscal health at the Pew Charitable Trusts.

There’s also the long-term reality that if the tax does discourage vaping, it will ultimately bring in less revenue.

“There’s an inherent tension between sources of long-term revenue builders when, if the tax behaves as policymakers intended it to, it will dwindle over time,” Murphy said.

“One one hand, taxing and restricting access to e-cigarettes map help to reduce overall intake within the population. On the other hand, such measures may be detrimental to the health of those who smoke by discoursing them from switching to a less harmful source of nicotine,” the study, released July 1, said.

“If we’re not doing this to discourage people from smoking or address the cost of smoking, why are we punishing smokers, who tend to be lower-income individuals?” he said.

To contact the reporter on this story: in Washington at kzegers@bloombergtax.com