., and each discovered accounting errors that rippled across multiple years worth of reported financial statements.

All three companies decided that the misstatements, which in Qualcomm’s case represented a $154 million royalty revenue error, weren’t substantial enough to warrant a full, sweeping redo of past financial statements. Instead, they tucked language into routine filings with the Securities and Exchange Commission to fix what the companies described as immaterial errors.

Companies have increasingly corrected accounting mistakes through revisions as the volume of restatements plummeted over the past decade. The informal corrections allow companies to avoid the fanfare of a full restatement with the requisite press releases and SEC filings—possibly masking a broader problem for investors. One study found that almost half of revisions had an arguably material impact on a company and may have warranted a restatement.

Yet audit industry leaders argue that the steady flow of revisions is a sign that auditors are doing what they’re supposed to under the 2002 Sarbanes-Oxley Act, catching mistakes before they balloon into market-moving problems.

Public reporting of immaterial accounting errors has dropped in volume over the past decade but at a slower rate than restatements. Since 2014, roughly three-fourths of all corrections were reported as a revision, according to data compiled by Audit Analytics.

Companies reported 383 revisions last year, whereas full restatements hit a 15-year low of just 83, based on a preliminary analysis of 2019 disclosures by Audit Analytics. PwC LLP leads in revisions among the Big Four accounting firms, but the number of restatements each was responsible for varies from year to year.

“Certainly, restatements, at a kind of a basic level, are not good. It’s an indication that something was not done correctly the first time around,” said University of Georgia accounting professor Dennis Beresford, former chairman of the Financial Accounting Standards Board.

Michael Shaub, accounting professor at the Mays Business School at Texas A&M University, is among those who worry about the volume of revisions to correct misstatements. He questions whether auditors are being skeptical enough. 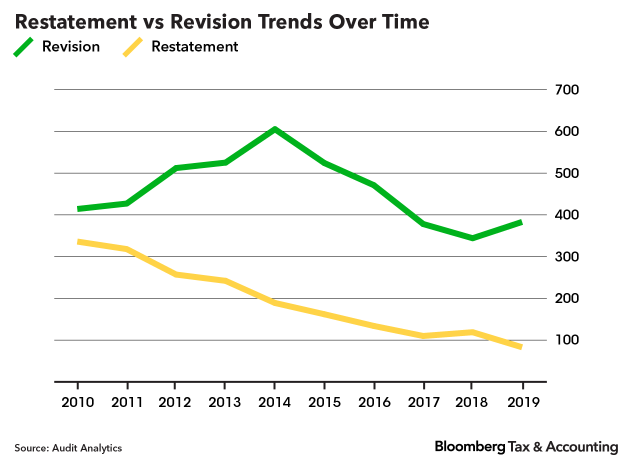 Not all restatements or revisions are created equal. The market may shrug off a restatement of prior periods, or send a company’s stock price spiraling.

But investors generally respond more quickly to a restatement, thanks in part to the required SEC form 8-K, which alerts them to such substantive changes, said Rachel Thompson, who teaches accounting at the University of Texas at El Paso.

Revisions don’t require a separate SEC filing. Instead companies can update the figures in quarterly or even annual reports. That means the potentially bad news stays hidden longer and takes more time for investors to react. But the market will respond, especially if investors consider the changes to be significant, Thompson said.

Thompson studied roughly 1,500 revisions and restatements issued from 2004 to 2015 and found that 45 percent of the revisions met at least one of the SEC’s materiality criteria. Her findings suggest that companies took advantage of the flexibility offered by SEC guidance and recorded misstatements as revisions when they could have triggered a restatement, she said.

Preparers and investors may not agree on the significance of an error, said Kevyn Dillow, senior accounting analyst at Moody’s Investor Services.

“Anything we use on a regular basis is material, or can be material to us,” she said.

The decline in restatements is touted by regulators, standard-setters and other leaders in the profession as evidence of improved audit quality and the reliability of financial reporting.

The healthy economy also plays a role in the lower number of errors reported and the next downtown could push those rates higher once again. “Sometimes these things are exposed in tighter environments,” Dillow said.

Although the quiet economic cycle might contribute to the downward trend, Michael Piwowar, a former SEC commissioner who now leads the Center for Financial Markets at the Milken Institute, points to auditors, corporate management and audit committees catching problems sooner and preventing mistakes from happening in the first place. The natural result would be for restatements to drop.

“To me that’s a signal that Sarbanes-Oxley is working as intended,” Piwowar said.

Restatements and revisions represent a tiny fraction of the overall number of audited financial statements. Though an indicator of financial reporting quality, the number of restatements alone may not be the best gauge of the effectiveness of any individual audit firm or even their regulator, the Public Company Accounting Oversight Board.

“It may be the quality of the audit that actually detects the error to begin with,” said Catherine Ide, senior managing director of professional practice and member services at the Center for Audit Quality.

And it’s not the auditors alone who determine whether a correction should take the form of a revision or a restatement. Management, the audit committee, and the company’s lawyers all weigh into that decision, Ide said.

Each restatement is also unique. Who discovered the error, when the error was found, the size of the misstatement, and the market reaction will differ regardless of how investors learn of the error.

That makes it difficult to spot a trend within a firm with thousands of partners and teams working on scores of audits, Moody’s Dillow said.

“To draw a straight line from audit quality to financial restatement outcomes I just think is very misleading,” said Wes Bricker, PwC LLP’s assurance leader. “I think it suggests in some way auditors should not have an incentive to identify, escalate, and then resolve issues with good transparency.”

The firm came under scrutiny last year after a whistleblower complaint about its independence and client Mattel Inc.'s accounting led the toymaker to restate two periods from 2017 and fix a $109 million tax error. 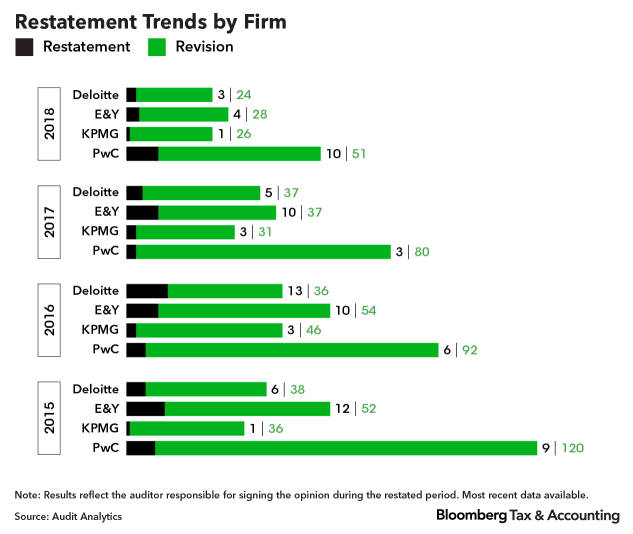 Although the number of restatements vary each year among the Big Four firms, PwC’s clients consistently issue more revisions than its top competitors, according to a review of Audit Analytics data.

The firm said that reflects its long-held approach that its clients should be transparent with stakeholders—from presentation changes to fixing immaterial errors—with the end goal of improving financial reporting.

“In all cases, we will continue to do the right thing,” Bricker said.

—With assistance from Nicola M. White