Carnival Corp., the company that makes Stuart Weitzman stilettos, and a major energy technology company are among the businesses this quarter forced to significantly mark down the value of goodwill on their balance sheets. They point to a familiar foe for exacerbating the losses: the coronavirus.

As the pandemic continues to roil the economy, and companies lower their expectations about acquisitions paying off, expect more companies to report impairments to the key intangible asset they put on their books when they buy other businesses.

And if the losses don’t happen, expect companies to explain how they’re bracing for them. As companies ding the value of the goodwill they hold on their balance sheets, that could hit their earnings.

“The longer it goes, the more impairments you will see because the damage will become extreme for companies,” said Greg Franceschi, managing director at Duff & Phelps.

Goodwill is an intangible asset that crops up on company balance sheets after they buy another company. It stays there idefinitely until the value of the acquisition falls and the company must then record an impairment.

Carnival wrote down $731 million in goodwill on April 9. Tapestry Inc., the company that makes Coach and Kate Spade bags as well as Stuart Weitzman, announced April 29 it would write down $211 million. Baker Hughes Co., which also is reeling from global oil price wars, reported a whopping $14.7 billion impairment in its April 24 filing. 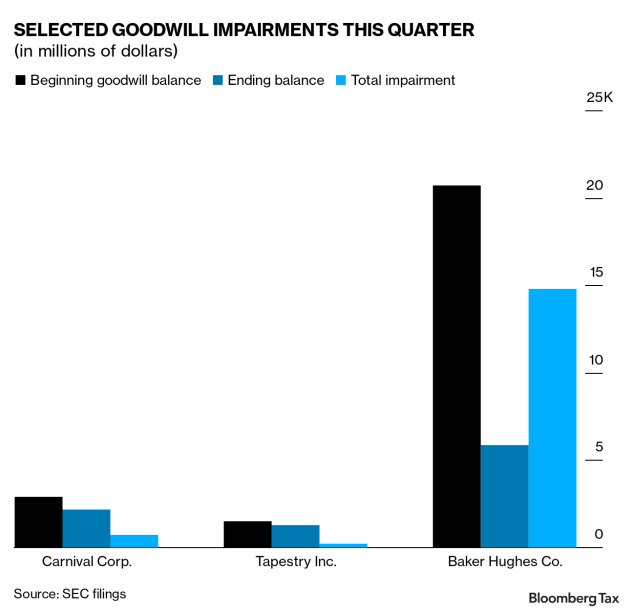 Travel, retail, and oil-and-gas companies have been among the hardest hit industries as widespread lockdown orders keep travelers, shoppers, and drivers at home. In filings and on earnings calls, the companies said the pandemic pushed the needle on the writedowns.

“These charges were result of a decline in both current and future expected cash flows, which was exacerbated by the Covid-19 pandemic,” Tapestry Inc. CFO Joanne Crevoiserat said on an April 29 earnings call. Tapestry recorded the impairment on its Stuart Weitzman reporting unit.

Goodwill represents what’s left over after one company buys another and has to justify the sticker price of the acquisition. The company adds up assets like physical property and patents, and the part remaining is called goodwill. It covers things like cost savings from combining a workforce, gaining a competitive edge in a market, and the potential to make money in the future.

After years of a strong economy and lots of companies combining and merging, U.S. companies have mountains of goodwill on their balance sheets; the CFA Institute in January reported that U.S. public companies have $5.6 trillion of it on their books. Carnival has it because of a series of competitor acquisitions, like Europe’s Costa Cruises. Tapestry Inc. is what Coach Inc. renamed itself when it bought designer Kate Spade Co. in 2017. It bought Stuart Weitzman in 2015. Baker Hughes was formed through a combination of Baker Hughes Inc. and the oil-and-gas business of General Electric Co.

Under U.S. accounting rules, as prescribed in ASC 350-20-35, companies must check the value of their goodwill once a year and measure it for signs of impairment. Companies typically perform the test at year end, when they’re doing their budgeting and long-range planning. If there’s a so-called “triggering event,” they have to test sooner.

What makes things tricky, though, is that the uncertainty from the coronavirus is not a triggering event by itself.

“Companies should look at their peer companies and the market as a whole,” Burgmeier said. Macroeconomic conditions as well as the companies’ own financial performance and odds for future profitability have to be taken into account.

This is what happened with Baker Hughes. In its filing, the company said it took in macroeconomic and geopolitical conditions when it decided to test its goodwill in an off period. The decrease in oil demand because of the pandemic and the collapse of oil prices hit its market capitalization and spurredthe need to test.

Goodwill impairment testing is a subjective exercise. It’s also a constant source of complaints from companies and accountants. It’s so controversial the Financial Accounting Standards Board is considering whether to allow companies to amortize, or write down in steady chunks over a set period, the goodwill they hold.

The goodwill a company has on its books doesn’t represent cash in its pocket. Bob Pozen, senior lecturer at the MIT Sloan School of Management and former president of Fidelity Investments, said at an accounting panel in October that he derisively refers to goodwill as “air.”

But impairments also can lend insight into how a company views the success of an acquisition. Tapestry’s $211 million writedown of the Stuart Weitzman unit represents almost all of the goodwill the company attributed to the designer shoe and accessories brand. “Clearly, we’ve been disappointed with the brand’s performance,” the CFO said on the company’s earnings call.

Significant writedowns can reveal bigger problems in companies and even move markets. Kraft Heinz Co. in February 2019 recorded a $7.1 billion goodwill impairment and its stock sank. The company cited softening outlooks for its U.S. refrigerated and Canada retail units, which raised questions about the viability of a company selling processed cheese and cold cuts as customer tastebuds shift to natural foods.


More Warnings on the Way

“Once you’re six months into this, you’ll need to act. You won’t be able to continue to wait and see how events unfold,” said Dmitri Drone, managing director and head of Houlian Lokey Inc.'s corporate valuation advisory services.

Tailored Brands Inc., the owner of Mens Wearhouse stores, signaled it was paying attention in its latest 10K annual report, filed on April 8. The tuxedo and formal wear chain said its evaluation of the goodwill on its books showed no need to impair it. But if social distancing-forced store closures continue and its stock keeps sliding, it will have to write down the asset. Such a writedown could have a material effect on its earnings, the company warned.

The Boeing Co. in its April 29 quarterly filing disclosed that it considered the uncertainty from the coronavirus a reason to test its goodwill outside of its usual annual cycle. The company reviewed the goodwill for its commercial airplanes and commercial services reporting units but the review didn’t result in an impairment.

If we do see impairments this year, they stand to be big, said Michael DeLuke, managing director at Houlian Lokey.

“The potential dollar amount of impairments that companies might announce could outstrip what we’ve seen before,” DeLuke said.