Deloitte’s use of skilled foreign workers under the H-1B program, which is largely associated with technology companies, is far greater than any other applicant, according to a Bloomberg Law analysis of fiscal year 2019 Department of Labor data.

A total of 57,259 H-1B visa workers were approved by DOL to work at the firm, including workers requested by itself and by staffing companies to place there, the data show. The total dwarfs second-place , which is associated with applications for 29,623 visas.

The requests come amid a major push by Deloitte and the other Big Four accounting firms to offer technology services ranging from cybersecurity and blockchain to machine learning. In a statement, Deloitte said it submits applications for multiple potential locations where the visa holders might work for clients scattered around the country.

The actual number of workers who hold the visas is a just a fraction of the applications that Deloitte submitted last year.

“While our focus is hiring U.S. workers—thousands this fiscal year on a national scale—our use of the U.S. visa programs allow us to complement our domestic workforce with highly-skilled workers, many of whom are graduates from U.S. colleges and universities, to meet the needs of our clients and our business,” Deloitte said.

But Deloitte also stands out for contracting H-1B workers out to other firms, placing the company in a category normally associated with big names in IT staffing services like and , the top two suppliers of H-1B workers to other companies. Deloitte ranks third.

The visa program and its corporate sponsors have been a particular target of the Trump administration’s efforts to urge U.S. businesses to “hire American.” The data reveal not only which companies are applying for the visas, but also the final destination of H-1B workers who are contracted out to other employers.

“Big companies, small companies depend on the H-1B visa to help fill critical workforce gaps both as direct hires and by outsourcing certain non-core functions to companies that do that kind of work well,” said Lindt, a Sidley Austin partner whose practice focuses on business immigration.

The H-1B visa, which essentially covers foreign nationals with a bachelor’s degree or higher, was intended as a streamlined way for businesses to access professional talent from abroad. Critics say it’s devolved into a cost-saving program that allows companies to displace U.S. workers with imported cheap labor.

The visas are capped at 85,000 per year, but that cap doesn’t apply to H-1B extensions for workers already in the U.S. That allows companies that rely heavily on the visa to hire and retain thousands of H-1B workers for years on end.

The data shines a light on what businesses want from the visa program and who their clients are, even if most of their wishes ultimately go unfulfilled, thanks to the cap.

Qualcomm’s strategy, similar to Deloitte’s, is to reserve as many H-1B slots as possible under a single job title in order “to ensure that we can attract top talent and are able to hire the best engineers regardless of their country of origin,” said spokeswoman Christine Trimble. The company uses standardized job descriptions and usually seeks DOL approval for 100 positions on each application, but may only ultimately sponsor 10 individuals for the visa, she said.

Rounding out the top 5 companies getting H-1B workers approved directly as well as taking on workers from staffing companies:

Deloitte’s rivals, Ernst & Young LLP, PwC LLP, and KPMG LLP, submitted fewer than 5,000 applications each, a fraction of the total sought by Deloitte. 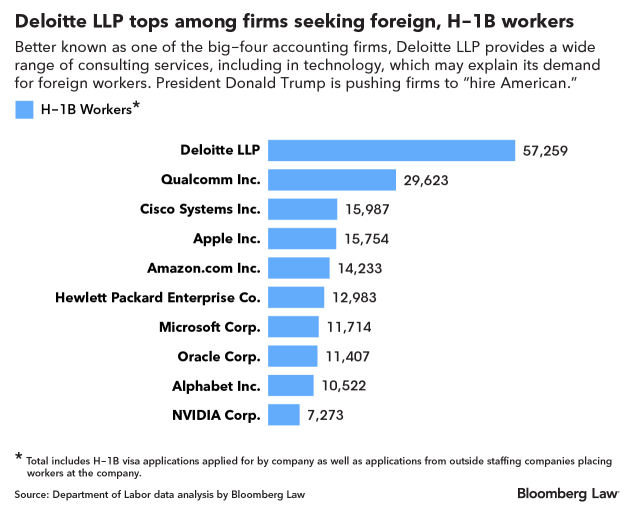 Desire versus ultimate outcome aside, the list of companies where H-1B workers are sent on a contract basis encompasses a variety of different industries, from banking to communications to health care to retail.

“Depending on its needs, Wells Fargo works with third-party vendors, including specialized technology suppliers,” the company said in a statement. “Based on the work, those vendors may fulfill those needs with workers that they sponsor for H-1B visas, especially in tight labor markets,” it said.

The top 5 receivers of approved H-1B workers from outside sourcing firms are:

Verizon, Anthem, and Walmart didn’t respond to requests for comment. A representative for American Express declined to comment.

Big tech is, however, is still a major player in the visa game.

Cisco, Apple, and Amazon are among the top five H-1B users when combining visas they seek directly and workers they get from consulting firms. Rounding out the top 10 are Hewlett Packard Enterprise Co., Microsoft Corp., Oracle Corp., Google parent Alphabet Inc., and NVIDIA Corp.

Apple is notable for its heavier reliance on H-1B workers brought in from consulting firms. More than a quarter—4,395—of the total 15,754 H-1B workers slated to work for the tech giant are employed by outside staffing and consulting companies rather than Apple itself.

By contrast, Amazon only is bringing on 196 workers from staffing companies, equivalent to 1% of the total 14,233 H-1B workers at the company.

A representative for Amazon declined to comment. Apple, Microsoft, and Google didn’t respond to requests for comment. 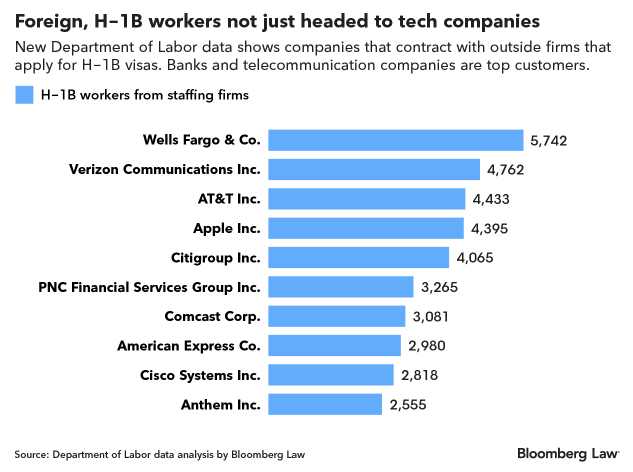 Target on IT Consulting

Although companies across the spectrum have had a harder time accessing the visas in the last three years, the Trump administration has drawn a bead on the IT services industry in its efforts to stem H-1B usage.

A 2018 policy from U.S. Citizenship and Immigration Services, which determines whether the jobs qualify for the visas once businesses get the green light from the DOL, creates extra hurdles for consulting companies seeking H-1Bs. Approval rates for IT consultants such as Infosys and Cognizant have lagged behind those of other companies.

The DOL data fall along the same lines, as an apparent effort to shame consultants’ clients. It shines a light on the extent to which companies in multiple industries and segments of the economy rely on the H-1B program, either as a direct employer of the visa workers or on a contract basis.

The agency first began collecting the names of secondary entities in November 2018, and started disseminating that information a few months later.

A Bloomberg Law analysis previously revealed that the administration to a certain extent shamed itself: H-1B workers were slated for projects at several federal agencies, including the DOL itself.

The agency didn’t respond to a request for comment.

“For certain skill sets, there is really high demand,” said William Stock, an attorney with Klasko Immigration Law Partners. And “every day procurement makes a decision” whether to complete the work in-house, elsewhere in the U.S., or overseas, he said.

If only 30 percent of candidates with those skill sets are U.S. workers, “then the price for those U.S. workers is going to be higher,” said Stock, a past president of AILA. But that higher price tag is likely to move the needle toward offshoring the work entirely, he said.
The administration’s visa policies have increased business uncertainty, leading some to hire the same workers but in India instead of the U.S., Stock said.

They’ve also in some cases had the intended effect of driving companies to make efforts to hire more U.S. workers, he said. “God bless them if they can find them.”

Data methodology: This story is based on U.S. Department of Labor decisions made on labor condition applications (LCAs) between Oct. 1, 2018, and Sep. 30, 2019. The data include fields for the primary employer (the entity requesting the certification) and the secondary entity (the entity where the employee will ultimately be placed).

—With assistance from Amanda Iacone and Christina Brady

To contact the editor responsible for this story: at jdunbar@bloomberglaw.com