A sign at Capitol Reef National Park outside of Torrey, Utah, during a heat wave earlier this month. As companies adapt their reports to address climate change risk, climate consultants are at a premium.
Photographer: George Frey/Bloomberg via Getty Images

Companies are quickly finding, however, that there’s a limited pool of specialized consultants to help them report air pollution and meet proposed SEC reporting requirements. That lack of talent is emerging as a major stumbling block as corporate climate reporting shifts from voluntary and niche to mandatory and mainstream.

“We don’t even know what this work is yet,” said Fiona Czerniawska, founder and director of Source Global Research, which tracks the consulting industry. “How can there be experts in all of this. So there’s an acute shortage.”

Unfinished rules, different approaches among national regulators, and varied impacts on different industries all add to the challenge of meeting the demand for climate consulting work. The $4 billion sustainability consulting market is a fraction of the $1.2 trillion global management advisory sector, Czerniawska said.

Still, expanded mandatory climate reporting represents a significant growth opportunity for the industry, including the Big Four accounting firms, who have already begun investing in their advisory and verification work. But a looming skills gap raises questions about the industry’s and their clients’ ability to catch up to investor expectations. 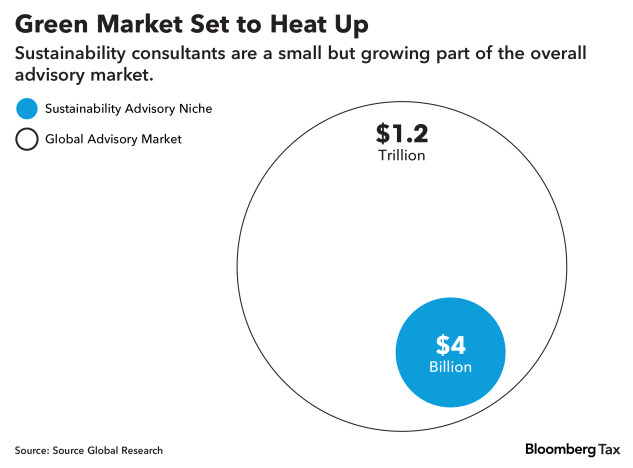 “People are shopping around, looking for that advice,” she said. “I tell them, ‘Here are four or five consultants that know your industry and can provide value,’ and I constantly get back, ‘Oh yes, we’ve tried to talk to those people and none of them are taking any new clients’.”

Multinational companies face tight compliance deadlines and potentially competing rules as both the European Union and the US have called for companies to give investors more details about the financial risks they face from a warming planet. Comments on the proposed reporting changes were due to the Securities and Exchange Commission earlier this month.

David Colvin, a partner at Fox Rothschild LLP and co-chair of the firm’s ESG practice group, is hearing similar exasperation from his clients. He anticipates the problem will get worse once the Securities and Exchange Commission rule proposal is finalized and every public filer has to comply.

“I’m spending time every day, having conversations with people to find the needle in the haystack,” Colvin said. “It’s tough. It’s hard to tell who’s legit and who’s not.”

Making matters worse, many clients aren’t just looking for generalists; rather, they want consultants with experience in their specific industry, he said.

“But then the haystack grows larger and the needle gets smaller,” Colvin said.

Companies traded in the U.S. would have to detail the type of air pollution they emit and have those figures verified by an auditor or other independent reviewer, under proposed SEC rules. Financial statements would have to break out the costs associated with extreme weather, changes in product offerings or operations.

The European Union is poised to enact more expansive reporting requirements that go beyond climate and would rope in privately held businesses as well as listed companies.

In the end, many firms will likely end up “not getting the A team, and not even the C team,” Peloso predicted. “Demand is so high that there is real concern about the capacity of these advisers to meet client needs.”

To prepare, companies aren’t just searching for outside vendors. They are also staffing up with full-time hires for legal and finance staff to help set up systems to collect and analyze the new climate data. Ongoing annual costs to expand corporate reporting beyond sales and product investments could cost an estimated $5 to $6 million annually, a price tag that far exceeds than roughly $500,000 estimate from the SEC, said David Brown, a securities lawyer with Alston & Bird LLP.

Consulting firms could charge whatever they need to if demand soars, Brown said.

Demand for consulting help is already strong, said Rob Main, a former Vanguard executive who launched an ESG strategy firm just before the start of the pandemic. He’s now adding to his team at Sustainable Governance Partners, where he is the managing partner, and called the proposed SEC rules an “accelerant” for clients in need of his services.

So far the firm has been able to steer clients to other vendors that can help with more technical work like calculations and data controls that will be needed to meet SEC filing requirements. “There is plenty of supply of expertise to go around,” Main said, for now.

In the meantime, companies having difficulty finding qualified consultants may be able to get relief from the SEC if a critical mass of firms tell the regulator that “this is the problem we’re encountering, and I bet we’re not the only ones,” said Andrew Vollmer, a former deputy and acting general counsel at the SEC during the George W. Bush administration.

That happened after Congress passed the 2002 Sarbanes-Oxley Act, according to Vollmer. “There was monumental heartache in reporting for this, and companies got relief from the SEC,” he said. “For years, the SEC told a bunch of categories of companies, ‘You don’t have to do this,’ because it was so expensive or difficult.”

Companies collectively could spend hundreds of billions of dollars to comply with proposed climate disclosure rules, an investment similar in scale to the effort it took to adopt the Sarbanes-Oxley audit reforms after the collapse of Enron and WorldCom, Czerniawska said.

Not all of that, however, will result in new revenue for consulting firms; it also includes existing projects that will be repurposed to meet sustainability goals like supply chain resiliency. Technology providers will also play a big role to create solutions for tracking and monitoring greenhouse gas emissions and other data, she said.

According to the SEC’s estimates, the new air pollution and climate disclosures could cost $6.4 billion in outside spending annually to prepare. That would include the cost of hiring an auditor to check the accuracy of certain air pollution metrics.

The Big Four accounting firms have expanded their service offerings to include sustainability, risk management or decarbonization. KPMG and Deloitte have each invested at least $1 billion into their global advisory offerings. PwC told Bloomberg Tax last year that it expects to build its sustainability offerings into a $1 billion business while EY is focused on preparing staff for a major change in corporate reporting.

Accounting firms and companies alike are hamstrung in planning as the SEC weighs whether to require more details about the risks and costs companies face from a warming planet—disclosures that stretch from the footnotes of the audited financial statement to a new management discussion of climate impacts.

Deloitte warned the commission in a letter dated May 31 that many companies may need more time to address the accounting, technology and staff resources necessary to comply with proposed climate disclosures.

The firms too will need a mix of skilled staff to prepare companies to meet any final rules.

EY already has 3,000 climate specialists including PHDs and engineers assigned to its audit and assurance practice worldwide, and is still hiring and training current staffers both to help clients meet any new disclosure mandates and to prepare auditors, said Marie-Laure Delarue, EY’s global vice chair for assurance.

“When the horizon is a bit clearer on what is going to be expected in terms of sustainability reporting, we will be ready first to help our clients because they have to prepare, and then to audit,” Delarue said. “So we will be ready.”