A petrochemical plant in Texas. Accounting standards for companies to report their climate-related risks are under development around the world.
Photographer: Eddie Seal/Bloomberg

Global standard setters responding to demand for mandatory green accounting rules face an important hurdle to making them viable: They must first present a united front to cut through a confusing array of competing initiatives.

“There is growing and urgent demand,” Lee White, executive director of the IFRS Foundation, said in a recent interview.

It is becoming clearer how the sometimes competing—and voluntary—green reporting standards that already exist will be merged into the mandatory standards under development. The IFRS Foundation, parent of the International Accounting Standards Board, has proposed setting up a parallel body to develop sustainability standards; the rules created by that new body, the International Sustainability Standards Board (ISSB), would focus narrowly on investor disclosures. They would likely be adopted by the more than 140 countries that use international accounting standards.

The European Union, meanwhile, is considering its own rules, taking a broader view: It talks of “double materiality,” meaning companies would be required to disclose both their environmental impacts and the financial risks they face from a host of environmental, social and governance issues, including global warming.

The initiatives are moving quickly enough that companies could use them in their 2023 financial year reporting.

The IFRS Foundation has agreed that the proposed board would concentrate on sustainability-related financial disclosures, initially prioritizing climate change, White said. Now it’s studying whether to change its own constitution by adding green reporting standards to its responsibilities.

In Time for Glasgow

White said the ISSB would ideally be formed by the time of the United Nations’ November Climate Change Conference in Glasgow, with the IFRS Foundation Trustees planning an October vote on establishing the proposed board.

That would allow for creation of a climate change standard by next year, he said, noting that “The full board does not have to be in place to do that.”

The IFRS Foundation began advertising for an ISSB chair and vice-chair on June 1, with the aim of having people in place by the final quarter of the year. Recruitment of the remaining members of the 14-strong board won’t start until the new chair is in place, White said, and no decisions will be made until then on what sustainability areas to examine after climate.

Wider, dual materiality, reporting will likely be left to national and regional authorities to develop, White said, because there is no equivalent of the ISSB to develop global standards.

Investors and political leaders have been seeking quick climate-reporting progress, amid a search for ways to limit global warming. Earlier in June the Group of Seven club of wealthy countries agreed to force companies to report climate issues in line with the global Task Force on Climate-related Financial Disclosures. The TCFD was created in 2015 by the Financial Stability Board to develop broad but consistent climate-related financial risk disclosures for use by companies worldwide. Bloomberg Tax & Accounting is operated by entities controlled by Michael Bloomberg, who chairs the task force.

The TCFD has developed a prototype climate disclosure standard, as have voluntary standards setters such as the Sustainability Accounting Standards Board in the U.S. These two groups are among the members of a technical advisory group for the ISSB. 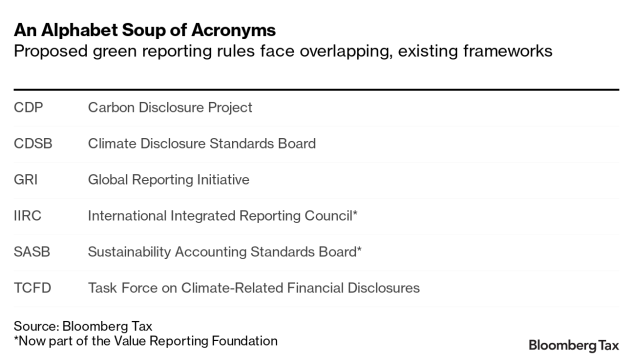 “We’re merging the various standards that the individual members have produced and tidying them up so that they are fit to be the basis of a formal standard,” Janine Guillot, CEO of the Value Reporting Foundation, said. “It’s up to the ISSB to draw up the actual standard, but we’d hope to present it with a prototype that’s close to ready for use. It’s realistic for them to act quickly on this.”

Guillot said that she expected mandatory green reporting rules for companies to be developed within the next one to three years.

The Value Reporting Foundation was formed in June through the merger of SASB and another voluntary standard setter, the International Integrated Reporting Council, in an attempt to form a single set of standards. Michael Bloomberg is chair emeritus of the foundation.

“There urgently needs to be integration, and the ISSB needs to look at wider areas than climate,” Guillot said. She cited human capital and biodiversity as areas that needed tackling, with the Value Reporting Foundation working to develop reporting standards for both areas.

Like White, Guillot talks of a “building blocks” approach to sustainability reporting. “What we mean by that is that financial reporting aimed at investors, such as we and potentially the ISSB develop, is the first rung of reporting,” she said. “Above that is the wider, dual materiality, approach of GRI and the EU, which must be integrated with what we do,” she said, referring to the Global Reporting Initiative (GRI).

In the EU, the European Commission’s accounting adviser, the European Financial Reporting Advisory Group, is drawing up plans for mandatory green reporting. The advisory group said in an emailed statement that it planned to draft the first set of green standards by June 2022. The first batch of standards would take force in 2024, covering fiscal 2023.

Large private and listed companies would be subject to the rules, which await European parliament approval.

Eric Hespenheide, chair of the Global Reporting Initiative, said the EU was unusually well-placed to pass legislation requiring a wide range of companies to use green reporting.

“It’s much harder in the U.S., where there’s no obvious regulator in place beyond capital markets,” he said.

Hespenheide said his group is working closely with the EU to develop standards that will be based on existing work. GRI’s own standards are already used by around 70% of the world’s 1,000 largest companies, he said.

“What we need to develop is commonality with other standards, from the likes of SASB and the ISSB,” Hespenheide said. “We must use the same language, so the same terms mean the same thing across the board, and the same metrics so that things are measured consistently. We’re not there yet, although we are talking to SASB and the IFRS Foundation.”

The coming changes are unlikely to please everyone.

Richard Murphy, a Sheffield University accounting professor, said in a call Thursday that the brewing international standards are “entirely inadequate.”

“They need to show how much it would cost them to reduce their emissions to zero, and that should be a charge on their balance sheets,” Murphy said. “Many companies couldn’t survive that charge, forcing them to change the way they do business. That’s what needed.”