An accounting error that came to light in the spring forced hundreds of blank-check companies to flag financial statement mistakes at levels not seen in more than a decade.

All told, about 86% of SPACs got stymied by the same complex accounting rule, the firm’s data shows.

Unlike many restatements, investors didn’t view the technical trip-up as a signal of fundamental problems at any single company. But the errors—brought to light by the Securities and Exchange Commission in April—threw sand in the gears of a booming market. The problems created a paperwork backlog, stalled initial public offerings, and halted mergers.

“It’s unlike anything that I’ve ever seen in my career in terms of what this industry went through,” said Paul Tropp, capital markets partner and co-chair at Ropes & Gray LLP.

The SEC staff in April made an unusual after-hours announcement warning that the blank-check companies that became Wall Street sensations in 2020 were reporting common investor incentives wrong. Certain deal sweeteners called warrants needed to be accounted for as liabilities, not equity, the agency said.

This small detail had big consequences. For years, SPACs had treated warrants—instruments that let investors buy shares at a set price in the future—as equity. Almost every SPAC realized its balance sheet was wrong, and merely swapping the “equity” line for “liabilities” didn’t solve the problem.

Auditors, attorneys, and consultants scrambled behind the scenes to deal with what felt like an overnight change to practice.

“Normally you have a little bit of wiggle room; you know when something’s about to change on you,” said Daniel Johnson, a CPA and contributor to research firm SPAC Track. 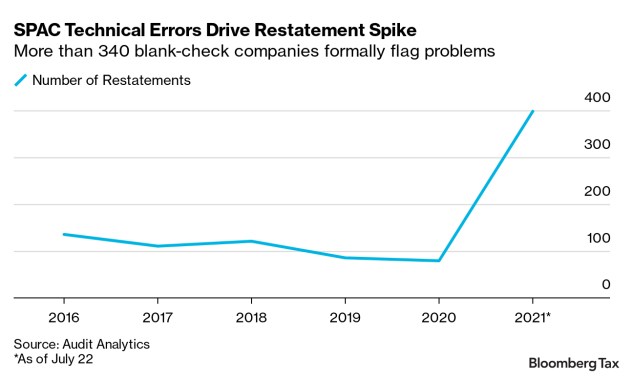 When in Doubt, Restate

Sometimes referred to as blank-check companies, SPACs have been around for decades but they soared in popularity in 2020 as a way to take promising companies public without the time and expense of a traditional initial public offering.

SPACs raise money, go public, and hunt for a private company to acquire. That company then gets a shortcut to a public listing by merging with the SPAC. Electric car maker Nikola Corp., online sports betting company DraftKings Inc., and Twinkies seller Hostess Brands Inc. all became public companies via SPAC merger.

They, too, got caught up in the accounting problems.

When a company uncovers an accounting error in an already published financial statement, it must get to work to fix it fast. If it’s a big mistake, the company must file a special notice with the SEC saying it has to restate its past financial statements.

These so-called “Big R” restatements are considered scarlet letters in financial reporting. They can signal a lack of expertise at a company, and sometimes fraud.

The market viewed the SPAC accounting problems differently. The accounting—outlined in the Financial Accounting Standards Board’s ASC 815—is notoriously complex. An extra comma in a sentence describing the terms of a warrant or other investor incentive can change its accounting classification, even if it doesn’t change the cash consequences.

But companies, auditors, and attorneys coalesced around owning up to the errors and moving on. Few saw the benefit in challenging the regulator. Most SPACs have up to two years to find a promising target to acquire and take public, and time is precious, Tropp said.

“Rather than engage in a protracted discussion, the most expedient path forward was to do the restatements or acknowledge the warrants as liabilities and move on, as opposed to getting stuck and not having resolution,” Tropp said. 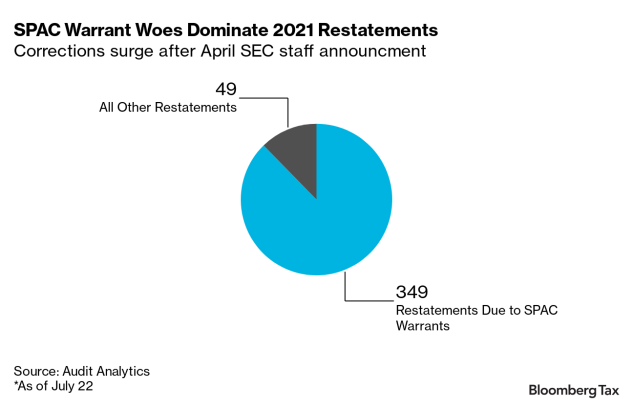 A majority of SPACs went with “Big R” restatements, but 231 fixed their errors with what’s called “Small R” revisions — misstatements that can be corrected via updated figures in upcoming quarterly or annual reports, according to Audit Analytics. When a company revises previously reported financial information, it doesn’t have to file a special form with the SEC.

Big R restatements have plummeted over the past 10 years, with more companies correcting errors via revision. More than 300 companies issued restatements in 2011, but only 80 did so in 2020, Audit Analytics data shows.

Deciding whether a SPAC correction merited a restatement versus revision was the subject of intense conversations between auditors and company executives, said David Larsen, managing director at valuation firm Duff & Phelps.

One of the primary drivers was when the company or the SPAC went public. If the IPO happened before Dec. 31, 2020, it was more likely to issue a restatement. After that, a company was more likely to fix via revision, Larsen said.

That’s because SPACs that existed prior to year-end 2020 would have produced annual financial reports by the time the SEC’s staff announcement came out. A financial report means something to fix. If the IPO happened after Jan. 1, there was a chance they hadn’t issued even their first-quarter 2021 financial statement by then, he said.

In the industry-wide rush to fix the accounting problems, at least one SPAC so far has had to issue an unusual correction to its correction.

A Tampa-based outfit that planned to hunt for a fintech company to acquire and take public, announced a restatement in May. By July 12, it realized that its accounting was right all along, it said in an updated SEC filing.

The terms of the warrants that Quantum FinTech Acquisition Corp. offered its investors didn’t contain provisions related to tender offers that meet the criteria for being considered indexed to their common stock. These minute details meant the warrants were rightly classified as equity in the first place, the company said. The company didn’t respond to requests for comment.

“That just highlights both the complexity of the accounting, and, for lack of a better word, the group think,” Larsen of Duff & Phelps said.

In the rush to correct errors and move on, mistakes can happen, said Derryck Coleman, director of research analytics at Audit Analytics.

“I’m not surprised, to be honest,” Coleman said. “It seemed like there was a lot of pressure for companies to make restatements in the first place.”

To contact the editors responsible for this story: at jharrington@bloombergindustry.com; at cmurphy@bloombergtax.com