Five candidates running for the U.S. Senate and House are proving popular with the largest U.S. accounting firms this election season.

The Big Four firms and individuals associated with those firms poured thousands of dollars into the campaigns of Beto O’Rourke, Barbara Comstock, Martha Roby, Heidi Heitkamp, and Kyrsten Sinema.

All five currently serve in Congress and their home districts stretch from Alabama to North Dakota. Two are Republicans and three are Democrats. All but one are in the middle of hotly contested races and are among the most expensive contests in the nation this fall.

The firms collectively spent millions contributing to Democrats and Republicans alike this election cycle but the five candidates were among the biggest beneficiaries of that support, according to a review of campaign finance data compiled by Open Secrets, which tracks U.S. political spending.

In a statement, Deloitte LLP told Bloomberg Tax that its non-partisan political action committee aims to support candidates from both parties that “understand and advocate for policies that promote economic growth and job creation.”

Although Republicans are expected to retain control of the U.S. Senate, Democrats are likely to win enough seats to lead the House of Representatives. That could dramatically change the conversation around a second round of tax reforms and could halt other Trump administration legislative priorities.

O’Rourke Gets the Most

O’Rourke, the democratic congressman challenging Republican incumbent Ted Cruz in the Texas Senate race, received the largest combined contributions from the firms’ political action committees and individuals associated with the firms, according to Open Secrets data.

The firms also supported O’Rourke’s opponent, but they gave Cruz just a third of the cash donated to O’Rourke in what is the most expensive race in the nation this fall, records show.

Comstock received the second largest combined contribution from the firms. The three-term Republican represents a swing district in the Northern Virginia suburbs outside of the nation’s capital.

Incumbent Rep. Martha Roby, an Alabama Republican who serves on the House Appropriations Committee, also received campaign contributions from the firms. She is expected to win her re-election campaign. 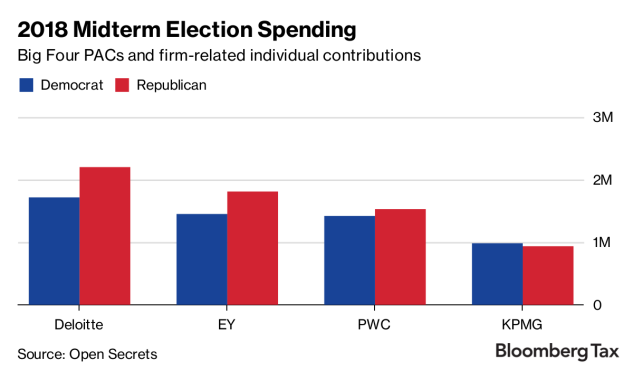 To contact the editor responsible for this story: at asartipzadeh@bloombergtax.com

Amanda Iacone
Reporter
What Democrats Want to Do on Taxes If They Win the House
© 2023 Bloomberg Industry Group, Inc.
All Rights Reserved