DraftKings is among a surge of companies to file a financial restatement after going public through a merger with a special purpose acquisition company.
Photographer: Mitchell Leff/Getty Images

When a company admits it made a big accounting error and has to redo past financial statements to fix it, unflattering headlines and stock price slips often follow.

If scores of companies get tripped up over the exact same issue, it’s a different story.

More than 170 of the 200-plus companies that have announced they have to restate past financial statements so far this year are special purpose acquisition companies or companies that went public via a SPAC merger, according to Audit Analytics. The number of accounting mistake admissions in the past month alone is almost double all of 2020’s restatements combined—and more are on the way. 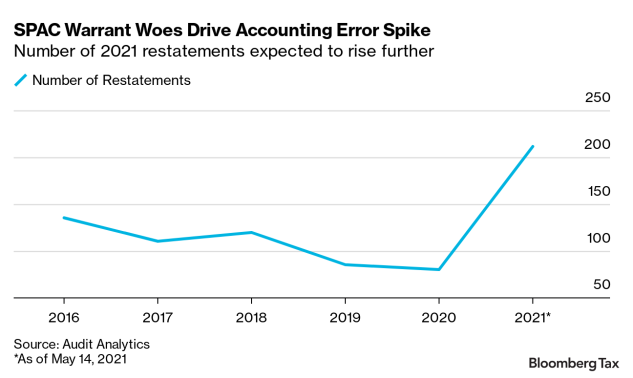 Every SPAC-related error stems from the same accounting problem: a tricky rule on how to account for money-raising tools ubiquitous in the buzzy blank-check market transactions. The mistakes emerged after the staff of the Securities and Exchange Commission warned in April that SPACs were incorrectly accounting for certain types of warrants they issue to entice investors, reporting them as equity when they really need to be liabilities.

The pronouncement halted the surging SPAC IPO market as auditors, valuation experts, and companies scrambled to fix their accounting errors and report newfound liabilities on their balance sheets.

The key detail: Everyone is scrambling. This is different from the cases where a single company uncovers a material, headline-making mistake, said Phil Lamoreaux, accounting professor at the W.P. Carey School of Business at Arizona State University.

“Everybody’s getting caught up,” Lamoreaux said. “It’s not like somebody intentionally misstated their earnings.”

The admission of a significant accounting error in past financial statements is a big deal. It requires a company to issue a statement that it needs to fix its mistake and then file updated financial statements with the SEC. It can signal lack of financial reporting expertise at a company or audit firm and send red flags to investors and regulators.

In some cases, restatements reveal or confirm fraud; Enron Corp. in November 2001 announced it would have to restate more than four years of financials and erase almost half a billion of previously reported revenues. The company filed for bankruptcy a month later, and its collapse set off landmark financial reporting and audit reforms.

“This is a fundamentally different deal,” said Michael Shaub, accounting professor at the Mays Business School at Texas A&M University.

In some ways, the en-masse restatement surge mirrors 2005, when more than 300 companies had to restate financial results after SEC staff accountants clarified the way companies needed to account for certain lease details like rent holidays. The Gap Inc., Rite Aid Corp., and Starbucks Corp. were among the companies that had to redo past financial statements.

The market viewed these error corrections as accounting principle clarifications as opposed to financial reporting lapses of individual companies, according to a U.S. Treasury-commissioned report on restatements.

SPACs soared in popularity in 2020 and early 2021 because the way they take a company public avoids the paperwork and regulator scrutiny of a traditional initial public offering. The founders of the shell companies seek money from investors, go public, and then target a promising business to acquire, usually within two years. That business gets a shortcut to a public listing by merging with the SPAC.

Electric car maker Nikola Corp. and online sports betting company DraftKings Inc. went public through SPAC mergers, as did some household names like potato chip maker Utz Brands Inc. and Twinkies seller Hostess Brands Inc. All four companies in the past month have announced they have to restate past financials because of SPAC warrant woes.

In return for investing in a SPAC, investors receive warrants—incentives that let them buy shares at a set price in the future. Depending on the terms of the warrants, they have to be accounted for as either liabilities or equity. Most SPAC warrants are structured similarly, and almost all of them prior to the SEC’s pronouncement were accounted for as equity.

SPAC IPOs are largely audited by two firms: Marcum LLP and WithumSmith+Brown PC. The two firms performed more than 90% of all SPAC IPO audits in 2020 although other mid-sized firms and the Big Four play prominent roles as SPAC deal advisers.

“This market is, in its own kind of way, homogeneous; it has the same auditors and bookkeeping,” said David Larsen, managing director at valuation firm Duff & Phelps. “Because of all of that, it kind of hit everybody at once.”

The area of accounting that the SEC raised questions about—ASC 815—is complex, even for seasoned experts. A slight wording change in a derivative agreement can trigger a totally different accounting treatment.

Over the years as SPACs grew in popularity, hundreds “if not thousands, of registration statements were reviewed by the SEC as well as every sizeable audit firm in the U.S.,” said David Bukzin, vice chairman at Marcum. “They all interpreted the accounting for the warrants the same way.”

Now all that accounting is under scrutiny. Short-term, the SEC’s accounting pronouncement had a chilling effect on SPAC IPOs.

Once the market gets past the accounting hiccups, there will still be a lure for private companies to go public via merger with these blank-check companies, but perhaps not at the same breakneck pace as 2020 or early 2021, said Neil Danics, founder of SPAC Analytics.

More than 400 SPACs are currently seeking private companies to acquire, according to the research firm.

“It’s just a non-cash accounting thing,” Danics said. “The accountants are waiting to get the valuation reports for the warrants and then they just restate the financial statements and life goes on. But what it’s done is it’s halted the mania.”