The SEC is admonishing accounting firms to make sure their auditing work remains independent of other business interests.
Photographer: Zach Gibson/Bloomberg via Getty Images

The Securities and Exchange Commission has put major accounting firms on alert that it’s looking for conflicts of interest in their audit work because of growing consulting businesses and client mergers.

The public remarks represent a shift in tone for an agency that only a year ago eased the application of its auditor independence rules, and reflect new leadership under Chairman Gary Gensler that is more focused on enforcing SEC rules than relaxing them.

“Under this administration, you’re really going to see increased regulatory scrutiny on auditors and on whether or not they are independent when winning engagements,” said Ann Gittleman, managing director in Kroll LLC’s expert services practice, who frequently consults on auditor negligence cases. “Are they really able to take the job they are taking?”

U.S. auditors are required to be independent of corporate management to ensure they give a thorough and unbiased review of accounting and financial reporting, delivering information that investors can trust. Monitoring compliance with rules that limit the types of services and relationships that threaten that objectivity has long been a priority area for the SEC.

In statements to Bloomberg Tax, the largest accounting firms said that their audit work and independence are core to their business. They also defended their advisory arms, saying that their audit teams rely on expertise in areas like valuations and cybersecurity that their consulting colleagues bring to the table, bolstering the effectiveness of audits.

“We find in many circumstances that those previous relationships will impair the auditor’s independence,” he said.

He doubled down on his remarks with an Oct. 26 written statement urging accounting firms to monitor deals and arrangements that could threaten the independence of audit teams in the future, especially “significant, multi-year non-audit service contracts.” Corporate audit committees and corporate management also share responsibility for their independence and should monitor deals for possible conflicts, Munter’s statement said.

“They are striking an aggressive tone,” securities lawyer Kurt Wolfe said of Munter’s remarks and related comments from Matt Jacques, chief accountant for the SEC Division of Enforcement. “They are saying that they’re going to look for these violations in new areas.”

The comments stem from what Wolfe called the “explosive growth” of accounting firms into consulting services, combined with unprecedented levels of corporate mergers and acquisitions. The commission is concerned firms may offer restricted services to an audit client, said Wolfe, who is of counsel with Quinn Emanuel Urquhart & Sullivan LLP.

Since 2010, revenue from the Big Four accounting firms’ consulting businesses have more than doubled globally, up a combined 136%. In comparison, revenue related to tax and legal services grew just 59% while audit fees grew just 19%, said Mark O’Connor, CEO and co-founder of Monadnock Research LLC, which tracks the consulting industry. 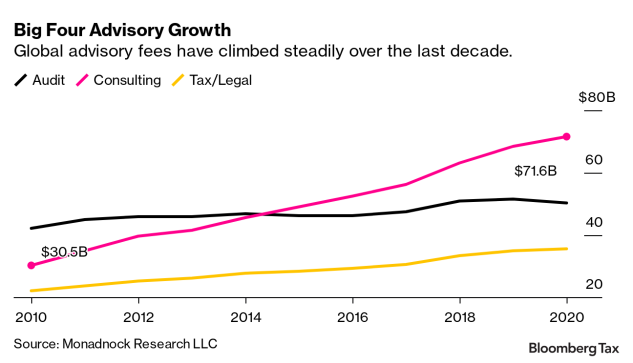 The revenue is from all of the firms’ clients worldwide, including privately held businesses, nonprofits, and governments, in addition to publicly traded companies whose auditors are subject to conflict-of-interest rules in the U.S. and Europe.

Those boundaries have made an impact. Non-audit fees that the largest firms collect from U.S. and U.K. publicly traded companies make up just a small portion of the fees that firms earn from public company audit clients, according to data from Audit Analytics from 2016 to 2020. 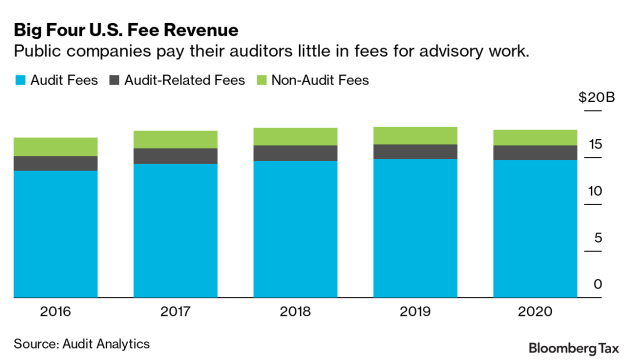 With the landmark legislation came strict SEC rules covering personal loans and other relationships that could impair an auditor’s independence. Despite those restrictions, firms aren’t limited in what services they provide to their consulting clients, said Vanessa Teitelbaum, senior director of professional practice at the Center for Audit Quality.

“I don’t think that consulting business is an inherent conflict of interest if you have the appropriate safeguards in place,” she said.

Over the last two decades, the four largest firms have built systems and teams designed to track and vet clients and deals, as well as staff members’ personal investments and lending to prevent and spot conflicts. Firm-wide training and policies aren’t limited to auditors.

“With growth comes responsibility for compliance,” PwC LLP said in a statement. Although growth in its consulting business is primarily with non-audit clients, PwC said it has bolstered its internal compliance systems in recent years and will continue to tighten its quality controls as the firm expands.

The risk for conflicts of interest are extremely high amid a persistently hot mergers and acquisition market. And service providers like auditors are often the last to learn of a pending corporate transaction, said Jonathan Wowak, chief operating officer at Cipperman Compliance Services.

The value of mergers and acquisitions worldwide has jumped by more than a quarter since 2016, and deals announced in 2021 total more than $4 trillion through early November, according to Dealogic data.

Conflicts can emerge as part of any deal, but the high volume of mergers has only created more possible pitfalls as parent companies may have ties to various industries, other companies or subsidiaries, Wowak said.

Companies have to identify and disclose conflicts, but they may not halt a deal. For auditors, the calculus of whether they are independent or not is in part an economic assessment if they have to give up a client or a particular engagement, said Wowak, a former auditor.

A year on, Munter has said the SEC will increasingly rely on a broad over-arching requirement that auditors be independent in both fact and appearance to investors.

Known as the “general standard,” Rule 2-01(b) is a tool that gives the SEC a bigger web to catch more independence violations, said Wowak.

The commission relied on that section of the rules in its $10 million settlement with Ernst & Young LLP in August. Three EY partners and the former chief financial officer of Bubble Wrap-maker Sealed Air Corp. also settled with the commission, agreeing to penalties and professional practice bars, for interfering with a competitive auditor selection process.

William Stiehl, in a previous role of chief accounting officer, gave EY confidential information about the fees and proposals that other firms had submitted as the company looked to replace its auditing firm in 2014, the SEC order said.

In a statement, EY said that it is “committed to competing fairly on the basis of our qualifications” and has strengthened its independence policies and training, including updates that address competitive bid proposals, plus additional monitoring and other changes.

“The rigging of the audit bid is a very direct, very salacious violation,“ said Ed Ketz, associate professor of accounting at Pennsylvania State University. After going out of his way to help EY secure the bid, Stiehl likely expected something in return, pressuring the partners’ skepticism once they started looking at the company’s accounting, Ketz said.

The case serves as a reminder that not just auditors, but also companies need to be vigilant and not assume that decisions they make won’t affect the auditor, said Mike Hermsen, a securities lawyer and partner at Mayer Brown LLP.

Firms should scrutinize their policies and button up any gaps, including how they seek out and accept new clients given the clear warning from the SEC, said Wolfe, with Quinn Emanuel.

“I don’t think the lesson should be that you can never offer consulting and audit services,” he said. “But I do think firms need to be really comfortable that they are getting it right.”