One of the dozens of companies to go public via SPAC merger in 2020 released a routine financial report with the wrong auditor’s name on it.

In the grand scheme of missteps, American Virtual Cloud Technologies Inc.'s, need to release a statement in February and re-issue its year-end financials with the right auditor signature was minor.

But as a surge of private companies enter the public market through mergers with special purpose acquisition companies, more serious errors have already appeared, and financial accounting experts say it’s likely just the beginning. Since January, three companies that went public through mergers with SPACs have made mistakes big enough to require them to restate their financial statements, securities filings show.

That number could swell after Securities and Exchange Commission officials issued guidance late Monday about accounting for common, complex money-raising tools that SPACs and newly public companies issue to early investors. These warrants need to be accounted for as liabilities, not equity, as some companies have been reporting, the agency warned. The after-hours guidance about how to evaluate the accounting guidance in ASC 815 sent ripples through SPAC accounting circles.

“This is no doubt the talk of the town as far as potentially impacting financial statements and potentially causing restatements,” said Demetrios Frangiskatos, co-leader of BDO USA LLP’s SPAC assurance practice.

The SEC had already warned early in April that companies that go public via SPAC should be ready for prime time. Internal controls need to be up to snuff, as do the teams dealing with accounting for a merger with a blank check company, the agency’s acting chief accountant said.

Speed is the name of the game when it comes to the hot SPAC market. The bare-bones shell companies raise money from investors, go public, and target a promising business to acquire. That business gets a short cut to public listing by merging with a SPAC. 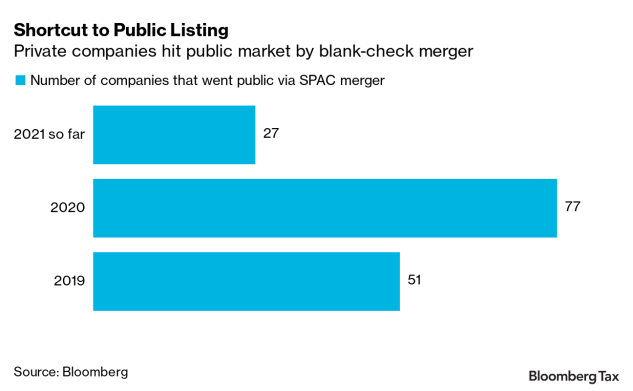 Under a traditional initial public offering, a private company could prepare years before hitting the public markets by beefing up its internal controls or hiring more employees for its financial reporting teams. For some SPAC mergers, the process could take mere months.

“The challenge that keeps coming into play is the speed,” said Jeff Murphy, director at Stout, an advisory firm. “There are all the challenges you normally have, but put into a much more stringent time frame, which elevates the stress factors.”

Add in accounting that is complicated for even the most seasoned financial reporting teams, and issues emerge.

Two of the companies that announced this year that they’d have to restate past financials—slot machine operator Accel Entertainment Inc., and medical equipment maker AdaptHealth Corp.—got tripped up over a complex area of accounting dealing with whether to classify shares issued to investors as a liability or as equity.

The distinction sounds simple on the surface, but some money-raising tools contain provisions that blur the lines. For drugmaker 180 Life Sciences Corp., the accounting questions were less complex; the company didn’t record several transactions, some of which were related to raising money. The company declined to comment. Accel Entertainment and AdaptHealth did not respond to requests for comment.

“Not only do these companies tend to be less along in the process of being public and having controls in place that a typical IPO might have, but on top of that, they’re also going through a complex transaction,” Coleman said. “It just adds to their likelihood they’d account for these transactions improperly.”

Some companies in securities filings are hinting at potential accounting headaches to come.

Canoo Inc., a Torrance, Calif.-based electric vehicle maker that went public in December 2020 after merging with a SPAC, flagged for investors the risk of the SEC questioning its accounting for warrants.

The company in its latest annual report said it accounted for its warrants as equity, but the SEC could decide they need to be accounted for as liabilities, which means fluctuations in value would hit its earnings.

Word from the regulator that the warrants need to be accounted for as liabilities could force the company to restate its previously issued financial statements, resulting in unanticipated costs and “potential loss of investor confidence,” the company said.

Luminar Technologies Inc., a company that makes technology for self driving cars, on April 1 announced that its annual financial statement would be late because of “industry-wide uncertainty” related to the technical accounting treatment of warrants issued by SPACs. The business went public by merger with a SPAC in December.

It’s unclear how many new public companies and how many pre-merger SPACs will be affected by the SEC’s latest guidance, said Bruce Pounder, managing director at CNM LLP, an accounting advisory firm. Every company will need to assess first if they have any errors and then how material those errors are.

It won’t be easy, Pounder said.

“This is absolutely one of the areas of GAAP that is consistently difficult for accounting professionals to understand and apply in practice,” he said.