Swift action from the Federal Reserve and U.S. government staved off a pandemic-led spike in missed loan payments. The message from the nation’s biggest banks: It’s coming.

, and set aside almost $28 billion for bad loans in the second quarter, a mark only surpassed by the last three months of 2008, during the depths of the financial crisis. The total was higher than analysts had expected, with all three lenders saying their economic outlook had deteriorated as the coronavirus continues to rage through the U.S. 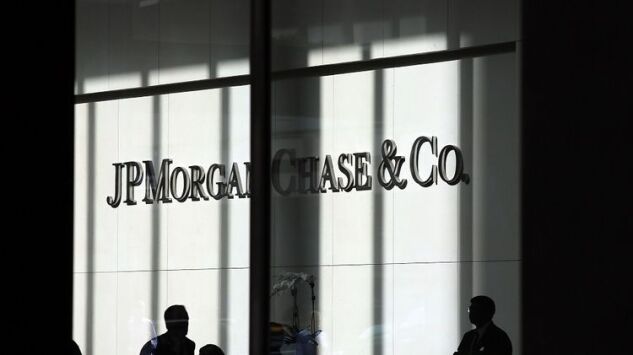 Even as unemployment surged, stimulus programs helped individuals stay current on debts and many have taken advantage of payment-deferral options from banks. JPMorgan said delinquencies in its biggest consumer loan categories were down or unchanged from a year earlier, and a majority of credit-card and mortgage customers who got deferrals had still made payments.

“This is not a normal recession. The recessionary part of this you’re going to see down the road,” JPMorgan Chief Executive Officer said Tuesday. “You will see the effect of this recession. You’re just not going to see it right away because of all the stimulus.” 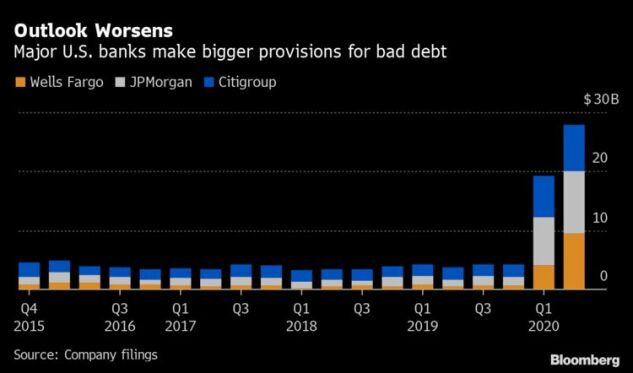 For Wells Fargo, the biggest loan-loss provision in its history led to the bank’s first net loss since 2008 and an 80% cut to its dividend. JPMorgan and Citigroup’s trading desks seized on huge market swings to deliver record quarters, helping those firms maintain profitability.

JPMorgan traders shattered their previous revenue record by more than $2 billion, while Citigroup’s 68% jump in fixed-income revenue beat even the most optimistic analyst estimates. The biggest Wall Street firms, after years of questions about whether their trading businesses were permanently broken, have benefited from a roller-coaster 2020. After the pandemic drove stocks into the fastest bear market ever in March, the S&P 500 mounted one of the biggest rallies in nine decades, boosted by stimulus measures and optimism over a swift economic rebound.

But even buoyant markets couldn’t halt the pain from the new economic reality prompted by the U.S.’s failure to contain the spread of coronavirus in ways other nations have. JPMorgan now expects the unemployment rate to remain above 10% for all of 2020, and fall only to 7.7% by the end of next year.

The second-quarter provisions bring the three banks’ 2020 total to $47 billion, more than those firms set aside in the last three years combined.

“I don’t think anybody should leave any bank earnings call this quarter simply feeling like the worst is absolutely behind us and it’s a rosy path ahead,” Citigroup CEO told analysts. “We don’t want people leaving the call simply thinking the world is a great place and it’s a V-shaped recovery.” 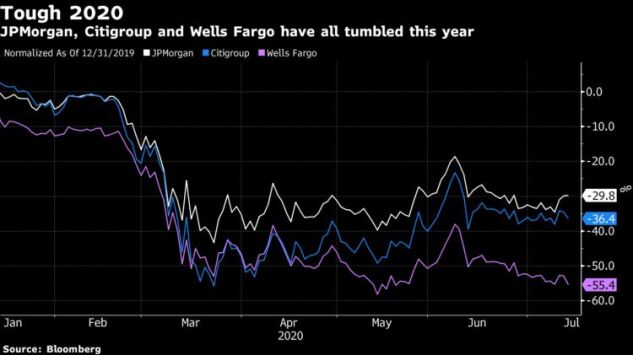 The pessimism of banks’ forecasts stands in stark relief to the predictions coming out of Washington. The White House has touted a sharp economic bounce, and said it’s intact even as the virus surges again and threatens new waves of lockdowns.

“I don’t see an interruption to the V-shaped recovery,” White House economic adviser told Fox News on Monday. “If there is one, I’ll be honest and factful about it. But at the moment, with our fingers crossed and some prayers, I think we’re on track for a very strong second half of the year, probably still 20% growth plus.”

The strains have yet to show on the consumer side. Citigroup’s non-accrual consumer loans fell 7% from a year earlier. JPMorgan’s total net charge-offs were almost half what was expected.

It’s particularly hard for banks and their investors to gauge the resiliency of consumers because so much depends on how the pandemic evolves and because the government has been providing them so much support and stimulus -- some of which is set to run out soon.

“What happens when we take the consumer off of life support?” said David Donovan, who leads the Americas global financial-services practice for Publicis Sapient, which helps set strategy for banks. As the disease ebbs in some areas and spikes in others including Florida, Texas and California, “it’s hard to get a handle on how that affects the overall consumer.”

Loans to companies already have started to sour.

Wells Fargo’s nonperforming assets jumped 22% from the first quarter, largely driven by loans to the oil and gas and commercial real estate industries. The bank boosted its reserve for credit losses by $8.4 billion in the period, with more than three-quarters of the increase coming on the commercial side. Citigroup said its roughly $3.5 billion boost to wholesale lending reserves was partly driven by a slew of credit-rating downgrades.

Still, the banks’ provisions are more about future pain than anything in current results. New accounting rules have pushed lenders to do more forecasting and try to get ahead of losses before they appear. The three banks increased their reserves by $23 billion, $7 billion more than the previous record.

“We’re just guessing,” Dimon said. “We are prepared for the worst case. We simply don’t know.”