People visit the Deloitte stand at the China National Convention Center on May 28, 2019 in Beijing.
Photographer: Visual China Group via Getty Images

U.S. regulators have opted to work with the largest international audit firms as a stopgap measure to offer some protection for investors while they seek to finally gain access to Chinese corporate audit records.

Regulators effectively need the Big Four to be their eyes and ears in China—a country with a burgeoning economy that remains beyond the typically global reach of U.S. audit rules.

Over the past year, the Securities and Exchange Commission and the Public Company Accounting Oversight Board have ramped up pressure on the firms, demanding they tighten their oversight of affiliates in China following a wave of accounting fraud scandals that renewed questions over the reliability of financial reports of Chinese companies.

It’s a strategy that requires the firms to lean on their disjointed business structures in order to share that message with their colleagues in China.

But the firms have little control over their Chinese affiliates’ business, even their staffing, said Tom Gorman, a securities lawyer with Dorsey & Whitney LLP, and a former attorney with the SEC’s division of enforcement.

“I don’t think this is an ideal arrangement for anybody,” Gorman said. 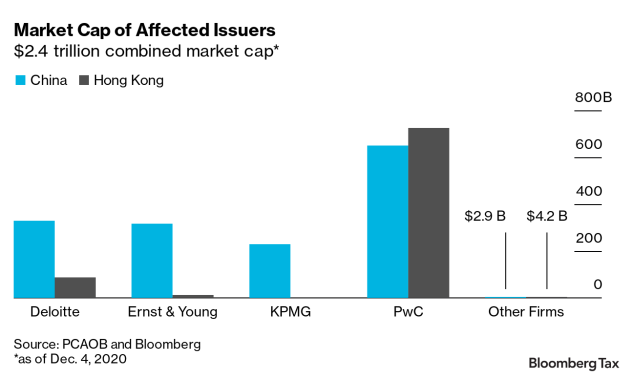 The Big Four firms—Ernst & Young, PwC, Deloitte, and KPMG—want to appear as a seamless, worldwide operation, but the administrative entities that link their member firms together can’t decide which clients the affiliates accept or which partner is assigned to which audits. Nor can they perform or supervise the audit work, said Jeff Johanns, a former PwC audit partner who now teaches at the University of Texas at Austin. That’s up to the local partners running the affiliate.

“The only real, ultimate leverage that the global network has would be to expel the firm from the network,” Johanns said. “And that’s a fairly rare thing.”

Audit work papers are considered state secrets in China and are barred from leaving the country, and as a result PCAOB staff have been unable to inspect affiliates there for years. Past attempts to fix the regulatory gap led to administrative penalties against the firms, and failed negotiations with Chinese regulators, who did not respond to requests for comment.

At stake are 217 China- and Hong Kong-based companies listed on U.S. exchanges with a combined market cap of $2.4 trillion—and most are audited by the Big Four accounting firms. Friday, President Donald Trump signed legislation (S. 945) that threatens to delist those companies unless PCAOB inspectors can review the work of their auditors.

The bill, which targets the companies, not their auditors, is effectively an attempt to get China to the negotiating table. 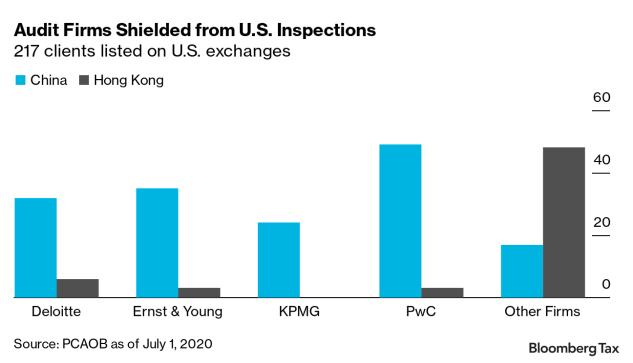 Although legally separate entities, the Big Four global networks are each bound together by reputation—plus a common set of audit methods and internal compliance checks, which are central to U.S. regulators’ pleas. But that structure offers few options for firm executives, who can’t control on-the-ground auditing in China nor change that country’s laws.

Investors say that operating structure has done little to protect their interests and instead has allowed the firms to grow their business in the lucrative Chinese market while insulating the rest of the network from the outsized fraud risks that come with clients there.

The SEC’s strategy toward the auditors reflects the unique role that the largest firms play in the capital markets: They have the skilled staff and sophistication to audit the largest, most complex companies in the world. And as long as the Chinese affiliates are part of that global network, the SEC and PCOAB have some leverage to ensure basic compliance with U.S. requirements.

“You need a strong auditing firm,” said Nancy Reimer, an accountant liability lawyer with Freeman Mathis & Gary, LLP. “If you deregister somebody and prevent them from doing that work, you’ve lost control and lost the ability to make sure the companies are complying.”

The SEC and PCAOB met with leaders of the four largest accounting firms three times over the past year, most recently in November, to discuss internal inspections, training, and client selection. The meetings came alongside fresh warnings to investors about the limits to U.S. oversight and the risks that come with investing in Chinese companies. A wave of accounting scandals involving Chinese companies this year underscored those risks.

This week, Luckin Coffee Inc. agreed to pay $180 million to settle SEC accounting fraud charges for fabricating $300 million in retail sales in order to meet earnings forecasts. The SEC said the Chinese coffee chain altered accounting and bank records in order to pump up its profitability on paper.

Meanwhile, the SEC also has launched investigations into the financials of GSX Techedu Inc. and Iqiyi Inc.

The Big Four promote their brands as a single, global firm, able to serve clients anywhere in the world through their network of affiliates. But the brands are built on a collection of separate partnerships that register individually with the PCAOB and link together through a global, administrative entity.

That legal separation is designed to protect the affiliates from paying for investor lawsuits and regulatory sanctions involving another member firm, said Jim Peterson, a former in-house attorney for Arthur Andersen.

But in China those business relationships often involve licensing a firm’s name and brand to a local accounting firm to comply with restrictions there on who can own a CPA firm.

Carson Block, an activist investor who runs Muddy Waters Research, wants the Big Four to accept more responsibility for their work in China, and sees those licensing agreements as a key incentive for both the Chinese affiliates and their global brands.

“If the global partners are not willing to be liable for the audit failures of their licensees, then they should be prohibited from licensing these brands,” Block said.

Short-sellers like Block and others have questioned the accounting of Chinese firms like , iQiyi Inc., GSX Techedu Inc., and Luckin Coffee Inc. And they’ve criticized audit firms for doing little to ensure that investors get reliable and transparent reporting while taking advantage of China’s economy to grow their practices and revenue streams—including for the booming consulting market.

Nathan Anderson, founder of Hindenburg Research and another short-seller who shares Block’s concerns, doesn’t expect the firms to boycott the Chinese market.

“They’re going to collect fees,” Anderson said. “They are going to issue unqualified audit opinions on companies that are probably engaged in some form of fraud. And at the moment there is little consequence of that system.”

Chinese regulators offer little effective oversight of auditors or their clients: To root out fraud would staunch the flow of international money into the country, Anderson said.

“We shouldn’t mix up a political dispute over access to working papers with whether or not there are quality processes in place to make sure that the audit work is sound,” he said. “And those processes are absolutely in place.”

PwC has been operating in China for decades, and today that affiliate nearly matches the size of its U.K. branch with thousands of auditors in China working on the audits of Alibaba Group Holding Limited and contributing to the audits of multinational companies like Goldman Sachs and Johnson & Johnson. The size and scale of the operation reflects the importance of the Chinese economy globally and to the PwC network, Oldfield said.

Each year, thousands of PwC China staff come to the U.S. for training on U.S. audit and accounting standards. Reviews of audit work provide an extra layer of internal scrutiny and the affiliate has a team of professionals that form a national office outpost for SEC-related work, he said.

Internal inspections and training are two powerful tools the firms can use to ensure the work done in China and elsewhere is hitting the bar, said Robert Cox, an accountant liability lawyer with Briglia Hundley, P.C. who previously worked for the PCAOB’s division of enforcement.

But internal and peer reviews lack the rigor of PCAOB inspections, said Jackson Johnson, a former Grant Thornton auditor once based in Hong Kong who now works with firms to boost audit quality.

Audit partners of affiliates in other countries, like the U.S., rely on the work of Chinese auditors, and must also depend on those same internal quality checks as regulators. It’s a system that relies on trust, Johnson said.

The Big Four firms all have similar compliance systems to review engagements and then identify and fix problems. At Ernst & Young, those checks are also designed to spread the firm’s values to members around the world in addition to ensuring consistent audit work.

“The member firms of EY have a strong track record of working together and delivering on these commitments,” the firm’s global entity said in a statement.

KPMG’s international arm said that the firm’s governance is structured to ensure that its members fulfill their gatekeeper role in the capital markets. Member firms take responsibility for the quality of their own work while its global board sets policies and looks to protect the firm’s brand, according to the firm’s website.

Peterson, the former Andersen lawyer, called it a “statement of confidence” that the firms rely on the work of those same Chinese affiliates to contribute to the audits of major multinational companies with operations there.

“The model is clunking along tolerably well,” Peterson said. “The problem with that is that it is always subject to a big shock when something serious goes wrong.”

—With assistance from Michael Standaert.

(Updates with signature of legislation in 10th paragraph. )

To contact the editors responsible for this story: at jharrington@bloombergtax.com; at ghenderson@bloombergindustry.com