Almost a quarter of all banks that were supposed to overhaul how they account for souring loans this year jumped at an unprecedented congressional pass to delay the major change.

Forty-five small banks seized on the provision, part of the $2 trillion coronavirus relief law (Public Law 116-136), that allowed them to blunt the effect the current expected credit loss (CECL) accounting standard on their capital and earnings. The large number of banks that chose the delay surprised analysts who previously thought the provision in the bill was clumsily written and provided little tangible relief.

The nation’s biggest banks, including some of the most outspoken critics of the accounting rule, took a hard pass on the option despite lobbying for it. For small banks, the delay was more appealing. It gave them a chance to wait out pandemic-related economic uncertainty and deploy resources to cash-strapped customers and small businesses, the banks said in earnings calls and regulatory filings.

“It just kind of felt right and it still does, honestly,” said Greg Dufour, CEO of Camden National Corp., a $4.6 billion bank in Camden, Maine, that opted to delay. “It wasn’t really too scientific. It was how we manage our resources.”

All but three of the banks that took the relief hold less than $10 billion in assets apiece. Mid-sized banks hold many multiples of those assets, while the nation’s largest bank, JPMorgan Chase & Co., has more than $3 trillion of assets on its books. JPMorgan and about 150 other banks adopted CECL on time.

The smallest institution taking the delay comes from Wauwatosa, Wisc.: Waterstone Financial Inc., a $2.1 billion bank with 13 branches in Wisconsin and a commercial lending office in Minneapolis. The largest is Cathay General Bancorp, a Los Angeles-based, $18.3 billion bank with branches in nine states and offices in Beijing, Shanghai, and Taipei.

Congress had never successfully undercut the work of the Financial Accounting Standards Board, the author of the rule, until the intervention on the credit loss standard. Under the relief Congress granted, the banks can wait to comply with CECL until the earlier of Dec. 31 or whenever the pandemic emergency is declared over.Banks had pressed for much more breathing room. Dozens of mid-sized banks, ranging from from to Wintrust Financial Inc., in March asked House and Senate leadership to delay the standard until 2024.

CECL requires banks and other businesses to report the losses they expect on loans versus waiting for customers to miss payments to write them down. Most large- and medium-sized publicly traded banks were supposed to comply with the post-financial crisis accounting rule on Jan. 1. Credit unions, privately held banks, and a special class of small publicly traded companies have until 2023.

The controversial rule requires banks to look to the future for estimates at a time when so much is uncertain. Waiting for more clarity made sense, many banks expressed.

There’s a danger in waiting, however, said Keefe Bruyette & Woods bank analyst Catherine Mealor. If economic conditions don’t improve from now until the banks adopt CECL, they risk taking a larger capital hit at the time of adoption.

However, Mealor said, reserves built under the old accounting standard should help provide a cushion.

“I don’t think delaying CECL is a sign of weakness, but it certainly shows that those that adopted CECL are going to be in a better position as we move into the back half of this year,” she said. 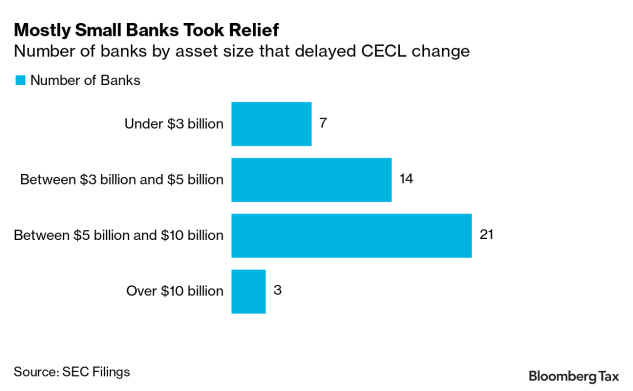 Unpredictability caused by the pandemic was a common thread banks that took the delay described in earnings calls and in quarterly filings. Banks also had to deal with customers asking for extensions on loan payments and process mountains of government-backed loan applications for small businesses.

“Dealing with all the uncertainty as it unfolded, anything that could be pushed off was pushed off,” said Sydney Garmong, managing partner at Crowe LLP.

The delay was particularly appealing to smaller banks under $10 billion in assets because they aren’t used to the complex models that Dodd-Frank Act Stress Tests (DFAST) requires larger banks to follow.

“They had a number to book on 1/1 but they just didn’t feel as comfortable as they would have liked,” Garmong said.

“When the flexibility to delay was announced, I basically jumped on it,” CFO Bill Burns said on the bank’s earnings call. “I knew that the combination of this new complex accounting estimate, combined with the drastically change in economic situation and forecast that would lead to potentially a very non-transparent and confusing situation for all banks and investors.”

Martinsville, Va.-based Carter Bank & Trust, which holds $4 billion in assets, reported in its first-quarter earnings release that even under its incurred-loss model, it built up its reserves by $2.6 million, or negative 8 cents per share because of the “economic and market conditions as a result of Covid-19.”

“Management believes the uncertainty regarding customers’ ability to repay loans could be adversely impacted by the Covid-19 pandemic given higher unemployment rates, requests for payment deferrals, temporary business shutdowns and reduced consumer and business spending,” the bank said in its regulatory filing.

As the pandemic continues to wreak havoc on the U.S. economy and keep businesses shuttered, more bank customers will fall behind on loan payments. More credit losses, both those expected and those realized, means banks will have to increase the reserves they set aside.

In the second quarter, KBW’s Mealor predicts that banks—both those that use CECL and the old, so-called incurred-loss model—will increase their reserves because of better economic data and a darker forecast.

“I think those that didn’t build as much will now see what others have done,” she said. “And I think they’re going to play catch up.”