Seattle is moving ahead with a payroll expense tax on businesses with at least $7 million in annual payroll. Like many other localities, it is trying new kinds of taxes to replenish treasuries and support growing local service demands.
Photographer: Karen Ducey/Getty Images

Residents and businesses in Portland, Ore., this year were introduced to a new 3% income tax on wages above $250,000, and new 1% levies on personal income above $125,000 and business income for companies with gross receipts above $5 million.

That was on top of existing local business income, licensing, and transit taxes, and Oregon’s individual income, transit, and corporate activity taxes. All those layered levies saddle some taxpayers with a 26.2% marginal rate, according to an analysis by the Tax Foundation—and that doesn’t count property taxes or the city’s $35 “arts tax.”

Many of the nation’s 19,000 units of local government will have to adopt some of Portland’s tax positions over the next decade. While cities and counties received $110 billion in relief dollars through the American Rescue Plan Act, most continue to face long-term fiscal challenges from declining state and federal aid, mounting unfunded mandates, poorly funded public pension systems, and relentless demands for services.

And some communities are experimenting with schemes beyond the tax code, such as “Miami Coin,” which brings revenue into that city when residents trade cryptocurrency reflecting a stake in Miami.

“Local revenue systems haven’t kept pace with modern economic realities. We are seeing changing demographics, changing consumption patterns, the emergence of different types of jobs, workplaces, and retail spaces,” said Tonantzin Carmona, a tax policy fellow in the Brookings Metropolitan Policy Program. “So when you think about who or what we’re taxing, we have to do it fairly and effectively.” 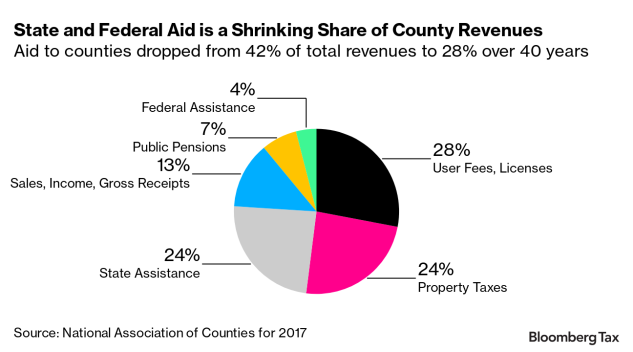 The local revenue scene has shifted dramatically over the last 40 years, leaving many communities with stubborn patterns of fiscal instability. A key driver has been the loss of state and federal support, said Teryn Zmuda, chief economist for the National Association of Counties.

Over the same period, cities and counties lost much of their authority to raise revenue under voter initiatives and limitations imposed by state legislatures, according to an issue brief published in July by the state fiscal health project of the Pew Charitable Trusts.

Those limits include prohibitions on certain types of taxes, and limits on tax rates, bases, or total taxes collected. As a result, “every state limits the revenue-raising capacity of its local governments,” causing “significant budget challenges for local governments,” Pew concluded.

In this climate, helping local governments generate additional revenue, and more reliable revenue, is a top priority for the Rethinking Revenue Project, an initiative of seven municipal planning groups including the National League of Cities, the Government Finance Officers Association, and the American Planning Association.

Early in 2022 the project hopes to release a set of guidelines and model tax ordinances helping communities deal with patterns of base erosion due to tax code “technical obsolescence,” said Shayne Kavanagh, senior manager of research at GFOA. Key themes will include revenue channel diversity and equity, expanding sales tax bases to capture services and digital innovation, and taxes on wealth rather than property.

“We’re thinking about what a model local revenue system might look like, a system that is greater than the sum of its parts,” Kavanagh said.

“What we are seeing is a proliferation of taxes at the local level,” Dobay said. “Local budgets are getting squeezed, putting aside the ARPA money. They’ve got to raise revenue, so they are looking at new and different ways to tax.”

In addition to the Portland examples, San Francisco voters approved two tax measures last year boosting business gross receipts taxes and establishing a new tax on businesses with highly compensated chief executives. Seattle is pushing forward with a new payroll expense tax. The tax is applied to businesses with at least $7 million in annual payroll, at a rate of 0.7% -1.4% on employee salaries over $150,000.

Joe Huddleston, managing director of indirect tax at EY LLP and a former executive director of the Multistate Tax Commission, and Dobay pointed to four additional themes to watch.

A growing number of municipalities are asserting the right to collect sales and income taxes from businesses that have no physical presence inside the jurisdiction. The U.S. Supreme Court ruling in South Dakota v. Wayfair permitted states to impose tax collection obligations on remote retailers based on economic activity in a state.

Philadelphia promoted this view with respect to its business income & receipts tax, and Chicago did the same under its lease transaction and amusement taxes.

In addition, localities are asking legislatures for relief from state-imposed limits on their taxing authorities. Kentucky municipalities have bipartisan support for a bill, H.B. 475, that will allow voters to amend a 130-year-old feature of the state constitution that restricts their taxing powers to property taxes, income taxes and franchise fees.

Taking another approach, cities and counties are reinterpreting existing laws to try to tax the digital economy.

Communities in 13 states have filed lawsuits against Netflix and Hulu, asserting they haven’t paid hundreds of millions of dollars in local utility franchise fees. The lawsuits assert the companies rely on locally regulated broadband internet connections to deliver services, and therefore should be required to pay the same utility franchise fees that cable TV companies have paid for decades. Similarly, Chicago reinterpreted its lease transaction tax to go after cloud computing services, and its amusement tax to capture taxes on streaming entertainment, gaming and music.

As local units of government create new tax systems, Dobay warned against “tax overreach.” There are strict limits on municipalities’ taxing authorities under state and federal law, she said, and taxpayers won’t hesitate to challenge irrational or burdensome tax structures.

“I would hope the locals recognize they have some power and I hope they use it responsibly,” Dobay said. “At some point it’s death by a thousand cuts. So there will be due process challenges based on the burdens that local taxes create.”